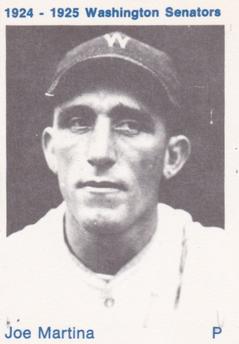 It took “Oyster Joe” Martina a long time to reach the majors — but when he finally got there, he made it count, winning a World Series in his only big-league season, 1924. Although Martina went just 6-8 that year, his record at lower levels was legendary. In 21 seasons — seven with 20 or more wins — he was 349-277. That win total is second in minor-league history to Bill Thomas (383).

John Joseph Martina was born on July 8, 1889, in New Orleans, Louisiana. He got his nickname from the family business — his father, Anthony Martina, worked as an oyster dealer. John Martina, who used his middle name and went by “Joe,” was the fourth oldest of nine children born to Rosa Martina (née Gallo), a homemaker.1 Some of Joe’s siblings also worked in the Martina oyster business as delivery wagon drivers.2

Martina played amateur and semi-professional ball around the city lots in New Orleans as a teenager. His powerful throwing arm became a local legend.3 He was the first person in line to pay 50 cents and enter a throwing distance contest at Pelican Park in New Orleans on July 5, 1909. Martina beat the three other contestants by throwing a ball from home plate over the center field fence. “Notwithstanding the doubts of the majority of the audience, which were offset by the affirmative assertions of his backers, he did it — and did it easily. The ball sailed over the double fence and landed out in the street, amidst the cheers of the whole assemblage.”4 The winning throw turned Martina’s 50-cent entry fee into a $25 prize.

With his confidence soaring as high as his throws, Martina began training to set a throwing-distance world record.5 He reportedly succeeded in this goal. Martina lined up at a festival put on by the New Orleans Beavers baseball club on July 31, 1909, and threw a baseball 417 feet, 2 inches. The Times-Democrat newspaper in New Orleans said the previous world record was 400 feet, 7.5 inches in its article explaining Martina’s achievement, which was partially titled “Martina Breaks Baseball Throwing Record.”6

Martina, who stood six feet tall, weighed 183 pounds, and threw and batted right-handed, split the 1911 season between the Cotton States League’s Yazoo City Zoos in Mississippi and the Southern Association’s New Orleans Pelicans. His two games with the Pelicans that year were the first two of many appearances he’d make with that club in his career.

From 1912-1915, Martina pitched for the Texas League’s Beaumont Oilers. The Boston Red Sox brought him to their training camp in 1913, but Beaumont paid $1,000 to get him back. “Martina was not turned back by the present world’s champions (Boston). We paid to regain his services and furthermore we paid well,” Beaumont manager Edward Wheeler explained.8

Martina’s 1916 season consisted of stops in St. Paul and Chattanooga, along with a return to Beaumont. His 1917 season was equally nomadic, with stops in Beaumont, Houston, and San Antonio.

He pitched for only one team in 1918, the Texas League’s Houston Buffaloes. He reappeared in Beaumont in 1919, leading the Texas League with 28 wins, and stayed there through the end of the 1920 season. Beaumont management expected Martina back in 1921 — but he didn’t show up for the start of the season and said he was retiring from baseball.9

The opportunity to stay close to home lured Martina out of retirement. New Orleans team president Alexander Heinemann worked out a trade with Beaumont for Martina’s contract, with the contingency that Martina agreed to pitch for the Pelicans. Martina’s brief retirement was over. He stayed with the club from 1921 through their 1923 Southern Association championship season, winning 56 games over the three-season span.

Larry Gilbert managed the Pelicans for 15 seasons in the 1920s and 1930s and called Martina “the greatest pitcher I had.”10 Gilbert told a story that showed Martina’s arm strength. “Joe was hooked up in a scoreless duel for nine innings only to have our shortstop make an error and cost him the game. Joe was so mad he grabbed the ball, and standing behind home plate, tried to throw it over the centerfield fence. I’ll never forget watching that ball sail. It hit the top of the fence in center.”11

After the 1923 season, Martina was 34 years old and had never received a major-league call-up. Even though he was older than most other minor leaguers, Martina was coming off a very strong season with a 21-10 record, a 2.85 ERA, and a league-leading 149 strikeouts in 40 games for the Pelicans. The American League’s Washington Senators took notice and signed him on September 25, 1923.12 After a 14-year minor-league odyssey, during which he had won 20 or more games on five occasions, Joe Martina was finally heading to the major leagues.

Martina’s memorable major-league debut came against the New York Yankees at Griffith Stadium on Saturday, April 19, 1924. He pitched a complete game in the Senators’ 7-2 win in front of 7,000 fans. Martina outdueled future Hall of Famer Herb Pennock and struck out the legendary Babe Ruth looking for one of his seven Ks. Ruth was subsequently ejected for arguing the call.

It was one of eight complete games Martina pitched for Washington, including two (June 26 against Philadelphia and July 1 against Boston) in which he allowed only one run in nine innings. All in all, Martina appeared in 24 Senators games in 1924, starting 14, and posting a 6-8 record with a 4.67 ERA, a respectable performance in the hitter-friendly 1920s.

The Senators had a great season in 1924 and proved to be a contending team down the stretch. They arrived to Fenway Park on September 29 for the penultimate game of the season with a magic number of one to clinch the American League pennant. Washington beat Boston 4-2 with thousands of people back in the nation’s capital standing in cold rain watching the results unfold on three electric scoreboards. “They took their drenching stoically. They cheered damply as the Nats went into the lead, and groaned dismally when Boston threatened. And then, when the flash came, the downtown section re-echoed with cheers and yells, auto horns tooted, whistles shrieked.”13

Washington was heading to the World Series for the first time — but the following day, as the regular season ended, Martina subbed for starting shortstop Roger Peckinpaugh.

The World Series began on October 4 and featured the Senators and the National League champion New York Giants. The teams split the first two games in Washington before the series shifted to New York. Martina’s only career World Series appearance came in the seventh inning of Game Three with the Giants leading 5-2. If the journeyman was nervous, he didn’t show it. He faced three future Hall of Famers and retired all three. High Pockets Kelly struck out looking, Bill Terry popped out to the catcher, and Hack Wilson flied out to left field. The Giants hung on to beat the Senators 6-4.

The series lasted seven games, and the finale was a classic, ending in the 12th inning when Earl McNeely’s grounder towards Giants third baseman Freddie Lindstrom hit a pebble and scored the series-ending run. After 14 seasons in the minors and one season in the majors, Joe Martina was a World Series champion. Washington D.C. did not host another such team until 2019, when the Washington Nationals beat the Houston Astros in seven games.

The defending champion Senators reported to Tampa, Florida, for spring training in February 1925. As of February 22, Martina was the only Senators player who had not reported, and team owner Clark Griffith threatened to suspend the pitcher if he did not arrive that night by midnight. Martina was scheduled to arrive on a boat from New Orleans on February 23, but that didn’t happen and he paid the price.14 “Joe Martina, pitcher, was notified by telegraph yesterday of his suspension because of his failure to report for training, as ordered. He will be subjected to a fine of not less than $100,” Washington’s Evening Star reported on February 24. “The Mardi Gras festivities at New Orleans, with the resulting big crowds in attendance and the consequent increase in the oyster business conducted by Martina, probably mean that the pitcher can suffer these financial setbacks and still be ahead of the game.”15

Martina finally arrived to spring training in the final days of February and explained that the family’s oyster business had prohibited him from arriving on time. Griffith understood and waived the fine.16

On April 9, the Senators announced they were returning Martina to the Southern Association’s New Orleans Pelicans.17 He never pitched in the major leagues again.

Martina’s long-running nickname — “Oyster Joe” — prompted another anecdote. Modern articles listing baseball’s all-time bizarre trades claim that Martina was swapped for two barrels of oysters after the 1929 season.18 While the story is mostly true, it appears that the transaction was a release and not a trade. Dallas team president Fred McJunkin agreed to give Martina his unconditional release in return for the two barrels of oysters.19 As the Fort Worth Star-Telegram proclaimed, “McJunkin and Company are set for a feast — and Oyster Joe Saturday night wore no man’s collar.”20 Some sources incorrectly say this deal was the inception of the nickname, but it had appeared in print years before 1929.

Martina continued pitching into his 40s, suiting up for the Cotton States League’s Lake Charles Newporters and Monroe Drillers in 1930. In 1931, he was a player/manager for the Baton Rouge Standards of the same league. He pitched in 17 games and had a 4.84 ERA, with his late-season appearances coming after his 42nd birthday. Baton Rouge finished in fourth place, 19 games out of first. It was Martina’s final season in professional baseball. In addition to his remarkable win total, he led his league in strikeouts on four different occasions and had a career total of 2,770 strikeouts.

After baseball, Martina moved to Iberville Parish, Louisiana, and worked as a salesman.21 He died at age 72 in New Orleans on March 22, 1962, from a heart attack in his home. United Press International’s obituary called Martina “one of the greatest pitchers in Southern Association history.”22 He was buried at Greenwood Cemetery in New Orleans. He was survived by his 68-year-old wife Loretta, his 49-year-old son Joseph, who played second base for two teams in the Class C East Dixie League in 1935, and his 37-year-old daughter Loretta.23

This biography was reviewed by Darren Gibson and Rory Costello and checked for accuracy by SABR’s fact-checking team.

In addition to the sources cited in the Notes, the author also used Baseball-Reference.com, FamilySearch.org, Newspapers.com, Retrosheet.org, The Minor League Register, and the Encyclopedia of Minor League Baseball.