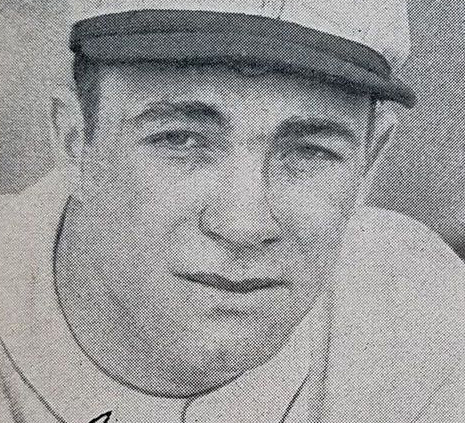 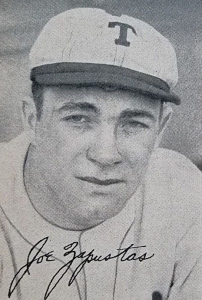 To the layman, the life of a professional baseball player is nothing but glitz and glamour. Large salaries, first-class travel and accommodations, and the adoration of millions are considered the norm for athletes who play at the highest levels. While that may be true for a Mike Trout or a Mickey Mantle, it is definitely not the case for the lion’s share of baseball players. For every player who earned the lower berth in a Pullman car while traveling between Philadelphia and Pittsburgh, there were hundreds more who slept on rickety, overcrowded buses on an overnight trek from Pensacola to Valdosta.

Even those players lucky enough to win a berth in the majors weren’t guaranteed a lengthy stay. The term “cup of coffee” was invented by baseball writers who noted that for many players the duration of their stay in the majors amounted to little more than the time needed to slug down a cup of coffee before heading off to start the day.

It was in this category that one finds Joe Zapustas, a late-season call-up for the 1933 Philadelphia Athletics. Despite the fact that Zapustas’s two-game career in the big leagues was unremarkable, he was able to parlay that brief stint into a lifelong career in sports for which he was celebrated as a referee, coach, and mentor to young athletes.

Zapustas was born in 1907 in Liepaja, a port city that was then part of the Russian Empire but is now a part of Latvia.1 He was the eldest child of Joseph and Antonia (Rusteiko) Zapustas. In 1912, the family left Latvia and sailed to America to begin life in the New World. By 1920 the family had settled in Boston where Zapustas’s father worked as a machinist.2 The young Zapustas’s academic and athletic prowess at South Boston High School were strong enough to win him a berth on both the baseball and football teams at Fordham University, where his athletic career began in earnest.

By the 1931 football season, Zapustas had won the starting fullback spot in the Rams’ wishbone-style offense as the team roared to a 6-1-2 record for the season.3 Joe quickly emerged into a dominant force for Fordham on both the diamond and the gridiron. His final year at Fordham, the 1932-33 school year, saw him named All-American in baseball as an outfielder and selected to the East-West Shrine Game as an end in football.4 That level of collegiate success was sure to attract the attention of professional scouts and, after Zapustas’s graduation in 1933, two professional leagues came calling. Rather than pick between the two, Zapustas tried his hand at both.

In the summer of 1933, Connie Mack’s Philadelphia Athletics were chasing the American League pennant. Always looking for top talent, Mack’s scout Ira Thomas arranged a tryout for Zapustas before the A’s legendary skipper. Mack liked what he saw, and the A’s inked Zapustas to a contract.5 Later that season with Philadelphia Zapustas’s major-league career began and ended in the span of two games during the course of a long weekend. In late September, with a third-place finish locked in, Mack gave the Fordham star a crack at big-league competition.

Zapustas debuted for the Athletics on September 28, 1933, against the Red Sox at Philadelphia’s Shibe Park in a 4-3 loss for the home side. Zapustas’s lone at-bat was limited to a ninth-inning appearance against Boston starter Lloyd Brown. Zapustas hit a popup to first baseman Joe Judge for the second out of the inning. One batter later, Brown retired the side and Zapustas’s initial sojourn in the major leagues was over moments after it began. Two days later, on September 30, Zapustas was given another shot against the Red Sox. This time he was in the starting lineup.

The A’s and Red Sox were playing a doubleheader. Boston won the first game 2-1 and for game two Mack decided to give left fielder Bob Johnson the rest of the day off. His replacement was Zapustas, who was tabbed to bat third, just ahead of slugger Jimmie Foxx, who was having a brilliant season for Philadelphia and would be voted the league’s Most Valuable Player. Zapustas’s first at-bat came with two outs in the first inning against Red Sox hurler Ivy Andrews. Zapustas duplicated his efforts of two days prior, again popping up to Joe Judge. His next at-bat was the one he would remember for the rest of his life.

Zapustas’s next at-bat came with two outs in the fourth inning with Boston leading 9-0. Not only was the game out of reach, but Andrews, having set down all 11 Philadelphia batters he had faced thus far, was perfect for the day. Zapustas put an end to that in short order. He hit a groundball in the direction of second baseman Freddie Muller and reached safely ahead of the throw with the first and only hit of his major-league career. Zapustas batted twice more in the game, both times against Andrews. Leading off the bottom of the seventh, he popped up to the catcher, Lou Legett. Then with two out in the eighth, Zapustas grounded to Muller, forcing Dib Williams at second base. Zapustas was never again to appear in the major leagues … at least not in baseball.

Zapustas’s gridiron career at Fordham had not gone unnoticed. After the A’s season was over, he signed with the New York Giants of the National Football League for the 1933 season. The Giants, under coach Steve Owen, enjoyed a fine campaign in 1933, going 11-4 to capture the Eastern Conference title before losing the league championship game to the Chicago Bears. As with his experience in Philadelphia, Zapustas’s contribution to the team was minimal. In two game appearances, Zapustas was credited with one reception from his position at end for a gain of 26 yards. As with his brief career with the Athletics, Zapustas’s NFL tenure ended with the end of the season. One base hit, one reception. But though he never again sniffed the rarefied air of major-league baseball or the NFL, Zapustas’s involvement in sports was far from over. The two-sport athlete’s career continued, but at the minor-league level.

Zapustas spent the 1934 and 1935 baseball seasons bouncing around the minor leagues. Though he batted a respectable .305 for the Double-A Toledo Mud Hens in 1934, he never again caught the notice of Mack or any other major-league manager in his quest to return to the big time. His brief stint with Toledo in 1935 saw his average dip to a paltry .204 mark, and after that year he never again appeared in Organized Baseball. But he had football to fall back on. He spent the 1935 through 1939 seasons with the Boston Shamrocks of the American Football League.6 The 1935 squad posted an 8-3 record and won the AFL championship.7 After the Shamrocks’ 1939 season, Zapustas never again competed in a professional arena. However, he was far from finished with athletics as a profession. In fact, Zapustas kept his hand in professional and amateur sports throughout his adult life.

Zapustas became an educator and coach. He taught for 30 years at Stetson High School in Randolph, Massachusetts, and coached the school’s basketball, football, and baseball teams.8 In 1941, Zapustas married Barbara Dugan and the couple raised three sons, Joseph Jr., Robert, and Richard. He also stayed in the limelight of professional sports as a referee. Beginning in 1945, Zapustas moonlighted as a boxing referee for more than 20 years, mainly for preliminary level bouts. But as was the case with his playing career, Zapustas officiated bouts of some of the biggest names in the game. On July 10, 1950, Zapustas, “a former South Boston athlete of some renown,” worked the main event at Braves Field which featured heavyweight contender Rocky Marciano against Gino Buonvino.9 Zapustas stopped the fight in the 10th round, giving the future champion Marciano a convincing TKO victory and preserving his unblemished record at 28-0. Marciano was not the only boxing legend to share a ring with Zapustas. Former champions Ezzard Charles, Kid Gavilan, Willie Pep, and Jose Torres all squared off in Zapustas’s ring.10 Zapustas also worked amateur bouts such as the 1965 Harvard Interhouse Championships.11

After his stint as coach at Stetson, Zapustas took on the role of athletic director at the school, a position he held for 25 years.12 He also was the director of recreation for the city of Randolph from 1951 to 1991. They named its ice arena for him.13 In 1972 Zapustas was inducted into the Massachusetts High School Hall of Fame.14 And in 1979 he was enshrined in the Fordham Hall of Fame for his football and baseball exploits.15 Zapustas passed away at the age of 93 on January 14. 2001 in Randolph, survived by Barbara, their three sons, and a large extended family.16

Joe Zapustas may not be remembered in Cooperstown or Canton, but he was able to parlay his athletic prowess into a lifelong career in sports in the Massachusetts area. To some, he is best remembered as the first native Latvian to play in the major leagues, but his enduring legacy lies in the countless young athletes he helped nurture as a coach and administrator in his adopted hometown of Randolph, Massachusetts.