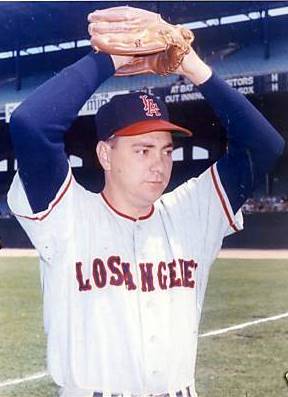 In that game, in his hometown of Cleveland, Ohio, McBride faced a lineup featuring future Hall of Famers Willie Mays and Hank Aaron, along with longtime stars like Tommy Davis, Bill White, Ken Boyer, and Dick Groat. McBride retired the great Aaron twice, but had trouble with Mays, who had a walk, a hit, and two stolen bases off him. Ken left the game after three innings with the score tied 3-3. He accounted for one of the American League’s runs, lining a ball off third baseman Ken Boyer’s glove in the second inning to drive in a run. The National League eventually won the game, 5-3. McBride finished 1963 with a 13-12 record and an ERA of 3.26, his lowest for a full major-league season. He was only 28 years old and one of the league’s better pitchers, but that was his last winning season in the majors.

Kenneth Faye McBride was born on August 12, 1935, in Huntsville, Alabama, but grew up in Cleveland. He starred in baseball and basketball at the city’s West High School. He led his basketball team to the state championship in 1952. Asked the key to his basketball prowess, Ken joked, “I shot a lot.”1

McBride was big enough – 6-feet-1 and 195 pounds – and might have been talented enough for a professional basketball career. But in the early 1950s, professional baseball offered the best opportunity for an athlete to achieve wealth and fame. After McBride graduated from high school in 1953, he pitched for a semipro team sponsored by Mike’s Diner. Later that year he was signed by a Red Sox scout, former pitcher Denny Galehouse, for a $500 bonus.

With only 16 teams in the major leagues in those days, even talented players tended to serve long minor-league apprenticeships. In 1954, his first season in pro ball, McBride dominated the Appalachian League, winning 18 games and losing 8 for Bluefield. He led the league in shutouts with five, struck out 180, and had a 2.53 earned-run average. McBride spent most of the 1955 season with Corning in the Pony League, posting a 10-9 record; that July he married the former Catherine Marie Jane Weir. In Greensboro in 1956, he pitched a no-hitter against Fayetteville on August 30, finishing the season 9-7 with a 2.64 ERA.

McBride appeared on his way to a major-league career until injuries limited him to 19 appearances for Oklahoma City in 1957. At Memphis in the Southern Association in 1958, he had his first losing season, going 9-10, but he came back strong in 1959. He won 11 games and lost only 5 for Indianapolis in the American Association, with a 2.79 ERA. One might have thought that the Red Sox, an organization going nowhere in the 1950s, would have wanted to bring the 24-year-old right-hander up to the majors for a look. Instead, they sold McBride’s contract to the first-place Chicago White Sox on August 1. Three days later, Ken McBride made his first major-league start.

White Sox manager Al Lopez made a lot of bold moves during the 1959 pennant run. Eschewing the power game for a running offense and giving starts to cast-off pitchers demonstrated the savvy that made El Señor the most successful manager in the 1950s after Casey Stengel. The White Sox’ defensive strengths perfectly suited McBride, who had one of the best sinkerballs of anyone pitching at the time. With a Gold Glove catcher, shortstop, and second baseman, the White Sox could get him plenty of groundball outs.

In 1959, pitchers didn’t routinely leave a game after seven innings, no matter how many pitches they had thrown. Gene Woodling, leading off the eighth for Baltimore, hit a groundball to first baseman Norm Cash, who booted it. McBride got Barry Shetrone to foul out, but gave up a single to Joe Ginsberg and then walked Brooks Robinson, loading the bases. Lopez brought in Turk Lown, who walked in the tying run. Baltimore scored another run before the White Sox could retire the side, then held on for a 3-2 victory. But McBride, who had allowed only one earned run in 7⅓ innings, had pitched very well in his first major-league game.

McBride started again at Washington on August 9. This time his pitching wasn’t as sharp, and he was lifted in the fifth inning, when Washington scored three times to take a 3-2 lead. One of the three runs he allowed was unearned and the White Sox came back to win the game, 4-3, but McBride made no more starts for the White Sox that season. Although he had clearly showed promise, the team was in a pennant race and had no time to develop young pitchers. Those two games were McBride’s only starts for the White Sox. He made only scattered appearances over the remainder of the season. He did earn a save on September 27, the final day of the regular season, pitching a scoreless ninth inning in a 6-4 win over the Tigers, with the pennant already clinched. The club left McBride off the postseason roster, so his contribution to the 1959 pennant was a 0-1 record with the one save. He gave up 20 hits in 22⅔ innings and had an ERA of 3.18. When asked in 2008 why he didn’t pitch more that season, McBride replied, “You’ll have to ask Al Lopez.” (An impossible task; Lopez died in 2005.)

McBride told his interviewer that he was very grateful for the chance to play for a pennant winner. He said the White Sox were successful that season because their stars were all “great competitors” who would do whatever it took to win. Even years later, Ken could chuckle at how mad Nellie Fox got when an infielder caught one of his line drives. Since McBride was a rookie joining the team in the middle of the season, he didn’t make many close friends. In fact, he became friendlier with some of the Sox while pitching against them for the Angels.2

The White Sox front office reacted to the World Series loss by trading many of the team’s prospects for more established players. This didn’t work out too well for the White Sox, who wound up dealing future stars of the 1960s like Norm Cash for veterans who were quickly washed up. The White Sox kept McBride in the minors for most of the 1960 season. He went 11-14 with a respectable 3.23 ERA for San Diego in the Pacific Coast League. He was brought up for five games at the end of the season, and he again posted a 0-1 record. After the season, the White Sox made him eligible for the expansion draft to stock the new American League teams in Los Angeles and Washington, and the Angels selected McBride in the December 14 draft.

McBride said that going to the Angels “was the best break I ever had.” He became a pillar of their rotation during his first year in the league, winning 12 games and losing 15, with a 3.65 ERA – not a bad won-loss mark for a first-year expansion club with a losing record. He threw 241⅔ innings and struck out 180. The first-year Angels, managed by Bill Rigney, finished in eighth place in the 10-team league, ahead of the Kansas City Athletics and the expansion Washington Senators.

In 1962 the Angels finished in third place – one of the most impressive feats ever for a second-year expansion team. McBride set a team record that lasted for many years with 10 consecutive victories in the first half of the season. He was 11-3 with a 3.25 ERA in July when he felt a sharp pain in his side one night. The pain persisted, and was eventually diagnosed as a cracked rib, combined with pleurisy. Ken made only two more appearances that season.

In 1963 the Angels returned to the second division, but never fell to the depths of the cellar. McBride’s 13-12 record and 3.26 ERA confirmed his status as one of the best right-handers in baseball. On June 9, he demonstrated extraordinary devotion to his team when he took his regular turn on the mound despite learning earlier that day that his younger brother had died in a car accident. McBride beat the Minnesota Twins, 4-2, and then went to Cleveland for the funeral.

McBride pitched particularly well against the New York Yankees, winning five straight games against the league’s strongest team from 1961 through 1963. He attributed that success to his competitiveness – he always wanted to beat the best. It helped that after a couple of years in the league he learned to get Yankee sluggers like Yogi Berra out. He learned never to throw Berra a strike, but rather to curve him inside.

Newspaper reports frequently described McBride as one of the “classiest” and “best-liked” players in the American League. He said his secret was to just “be nice to everyone. A lot of ballplayers don’t.” Just 28 years old going into 1964, he appeared to be on the verge of stardom.

Alas, it was not to be. He won the 1964 opener for the Angels and, in his second start, he was ahead 2-0 against Detroit when rain interrupted the game in the fifth inning. After a long delay, the game resumed. Manager Rigney wanted to take McBride out but he insisted on going back in. After he did, he recalled years later, “I heard something pop” in his arm. His arm hurt so badly that he couldn’t even comb his hair. From that time on, McBride’s curveball and sinker were never the same. He lost 10 games in a row and finished the year with 4 wins, 13 losses, and a 5.26 ERA.

McBride tried to play in 1965, but his 6.14 ERA in the eight games he pitched (four starts) earned him a demotion to the minors in mid-August. He thought about not reporting, but decided to go ahead in order to ensure that he received the rest of his salary. Curiously, neither the team’s beat writers nor Ken himself spoke about his physical problems at that time. Instead, McBride was philosophical about his demotion. He said, “I had been expecting this for the last couple of months. … I wish I had an excuse like a sore arm, but I feel better today than the first day I put on a uniform. The owners have given me every chance. … They treated me better when I was going bad than when I was going good.”3

McBride started three games for San Jose in the California League during the remainder of the 1965 season, but finished 0-1 with an 11.57 ERA. In January 1966, just 2½ years after he started the All-Star Game for the American League, Ken McBride retired as a player. He finished his major career with a 40-50 record and a 3.79 ERA, numbers that don’t look impressive, but during his three prime seasons with the Angels (1961-63), McBride posted a 36-32 record, a 3.46 ERA, and an excellent .237 opponents’ batting average.

McBride tried to stay in baseball. He managed in the minors for a year, and in the 1970s worked as a minor-league instructor and coach for the Milwaukee Brewers. In 1974 and 1975, he was the team’s major-league pitching coach. However, McBride said, “There wasn’t any money in baseball at the time unless you were a player.” After the 1975 season, at the age of 40, he moved back to Cleveland to raise his family. He became the co-owner and CEO of a construction company. As of 2008, he was still married to his high-school sweetheart, had two grown children and two grandchildren, and was still going to work every day at age 73. He remained a big fan of baseball and his hometown Indians, and watched their games every chance he got.

In addition to the sources cited in the Notes, the author also consulted the Ken McBride file at the National Baseball Hall of Fame which includes numerous newspaper articles spanning his career with the White Sox and Angels. Source newspapers not identified, but most likely are the Los Angeles Times and the Chicago Tribune.

1 Author interview with Ken McBride, August 19, 2008. All quotations from McBride are taken from this interview.