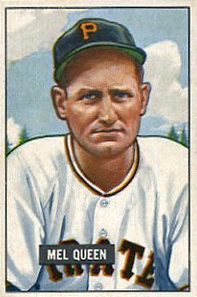 Melvin Joseph Queen overcame frequent bouts of wildness to have a long baseball career. He was signed by the New York Yankees as a pitcher in 1938 and ended his playing career in 1955 as the property of the Pittsburgh Pirates. Queen appeared in a Yankees uniform in four different seasons. His only winning season at the Major League level was 1944, when he started ten games for the Yankees, winning six and losing three. In 1947 he relieved in five games for New York without getting a decision, and then was sold to the Pirates on July 10.

Queen was born in Maxwell, Pennsylvania, a coal mining town south of Pittsburgh, on March 4, 1918. The oldest of four children (three boys and a girl), he was of English, Scottish, and German descent. His father was killed in a mine explosion in 1926, when Mel was eight years old. His mother was not going to let fate repeat itself with any of her children, so she moved with them to Wellsburg, West Virginia, a factory town not far from the Pennsylvania state line. Mel attended high school there and, in 1934, he joined the Civilian Conservation Corps, a public works relief program established during the Depression. Assigned to a camp in Berkeley Springs, West Virginia, he spent thirty-six months building roads, constructing cabins, and clearing woods. On the weekends he played shortstop and third base in a baseball league made up of teams from CCC camps.

When Queen completed his three years of CCC service he returned home and landed a job at a power plant in Windsor, West Virginia, where he played first base for the plant’s baseball team. Queen was slightly over six feet tall and weighed about 200 pounds during his playing days. He had tremendous wrists, large hands, and bulging biceps, perhaps as a result of his three years of labor for the CCC.

At the urging of his manager he became a pitcher. In August 1938, while pitching for the plant team, Queen was contacted by the Butler Yankees of the Class D Pennsylvania State Association. Apparently a fan had recommended him to the team. Queen pitched in two games for Butler and in eight for the Dover (Delaware) Orioles of the Class D Eastern Shore League.

In 1939 the Yankees sent Queen to the Amsterdam (New York) Rugmakers of the Class C Canadian-American League. He pitched well enough (14-9, 3.15 earned-run average) to be invited to 1940 spring training with the Binghamton (New York) Triplets of the Class A Eastern League. But Queen was not quite ready for Class A baseball and was sent to the Augusta (Georgia) Tigers of the Class B South Atlantic League. After three bad appearances he was sent down to the Akron (Ohio) Yankees of the Class C Middle Atlantic League. He hit his stride at Akron, with an 18-8 record, a 2.70 ERA, and 202 strikeouts in 210 innings that helped lead his team to the pennant.

Queen began the 1941 season with New York’s top farm team, the International League Newark Bears. But after developing shoulder trouble, he was sent back to Binghamton, where he pitched a league-record eight shutouts. Late in the season he was sent to the Kansas City Blues of the American Association. In his only start for the Blues he pitched a one-hit shutout. Overall, he won sixteen games that season, which earned him an invitation to the Yankees’ 1942 spring training camp in St. Petersburg, Florida.

During the off-season Queen played winter ball in Cuba where he developed an ingrown toenail. Sportswriter Will Wedge of the New York Sun claimed the affected toenail resulted “from a pair of ‘gaudy’ Cuban street shoes he had worn while gallivanting around Havana last month.”[fn]Will Wedge, New York Sun, February 25, 1942.[/fn] When the Yankees learned that Queen was playing in Cuba, they sent him an “admonitory” letter ordering him to return to the United States.

Queen made his big league debut on April 18, 1942. Facing the Boston Red Sox in relief, he pitched a scoreless inning in a 5–1 defeat. Five days later he pitched 1 2/3 innings against the Philadelphia Athletics and got the victory when the Yankees rallied to win. Queen pitched twice more and was unscored upon, before being sent down. He spent the rest of the 1942 season with Newark, Kansas City, and Binghamton.

Queen spent all of the 1943 season with Kansas City, where he won seven and lost twelve. During the off-season he found work in a defense plant in Johnson, City, New York, a small town near Binghamton. Mel’s work and family commitments—he resided in Johnson City with his wife and children—resulted in his reporting to Newark only three days before the start of the 1944 season. His first five starts for the Bears served as his spring training. His arm was tight and his muscles ached from the heavy labor. He lost all five starts.

Eventually his arm got stronger, and Queen pitched twenty-eight consecutive scoreless innings during a four-start win streak. In mid-August he was recalled by the Yankees. Placed in the war-decimated rotation, Queen made ten starts and won six games while losing three. One of his victories was the first of his three Major League shutouts, over the Philadelphia Athletics in the second game of a Labor Day doubleheader. He also got three hits in the game, two of them doubles. Yankees manager Joe McCarthy called Queen’s performance against the Athletics “wicked,” adding, “The Athletics never had a chance. He was faster than any other hurler in this league.”[fn]Dan Daniel, New York World Telegram, September 14, 1944.[/fn]

After the season Queen went to work in a defense plant in Wellsburg. In February 1945 he was inducted into the Army at Huntington, West Virginia. He missed the entire 1945 season and was discharged in June 1946. Used sparingly for the rest of the ’46 season by the Yankees, he pitched almost entirely in relief, winning one game and losing one. In 1947 Queen pitched in relief on April 30, did not pitch at all in May, and made four relief appearances in June before being sold to the Pirates. He made twelve starts for the last-place Pirates and compiled a 3-7 record.

Queen was 4-4 in 1948, and in 1949 the Pirates sent him to their Indianapolis affiliate in the Class Triple-A American Association. A 22-9 record earned him a return trip to Pittsburgh in 1950, where he went 5-14 for another last-place Pirates club. In 1951 the Pirates moved up one place, to seventh. Queen won seven games and lost nine. That season was the thirty-four-year-old right-hander’s busiest with the Pirates; he pitched 168 1/3 innings, the most in his Major League career, making twenty-one starts and eighteen relief appearances. His 6.58 strikeouts per nine innings led all National League pitchers. He also walked 5.3 batters per nine innings. In his big league career, Queen walked 329 batters, one more than he struck out.

On May 1, 1952, Queen started at home against the New York Giants; it was his last Major League appearance. He left after two innings, having given up six earned runs on four hits, three walks and a wild pitch. The Pirates sent him to Hollywood in the Pacific Coast League, where he won fourteen games and lost nine as the Stars won the PCL pennant. He pitched for the Stars again in 1953 (when he was 8-7), 1954 (16-8), and briefly in 1955, the year he retired. After his playing career ended Queen worked as a plumber and pipefitter for the aerospace manufacturer North American Aviation. He also did some scouting for the Cincinnati Reds in the early 1960s.

Queen was married three times. He and his first wife, Goldie Mae Bowersox, had two sons, Melvin and Gary, and a daughter, Valery. That marriage ended in divorce, and on September 3, 1969, Queen married Jewell Rebecca Smith. They resided in Bellflower, California. After Jewell died he married Wilma Mae Wynn on June 30, 1976. The newly married couple moved to Wilma Mae’s home state of Arkansas. Queen went to work for Rockwell International in Van Buren, Arkansas. He died on April 4, 1982, after a long illness. He is buried at Gracelawn Memorial Park in Van Buren.

While Queen pitched for Hollywood, the family moved to San Luis Obispo, California. There, his son Melvin Douglas Queen excelled in high-school sports and went on to play major-league baseball with the Cincinnati Reds and California Angels from 1964 to 1972. He came to the major leagues as an outfielder but became a pitcher while with the Reds. He was the Toronto Blue Jays’ farm director and later the pitching coach, and then a senior adviser for player development. Melvin Douglas Queen died on May 11, 2011, at the age of sixty-nine. Valerey died in 2003. Gary is still living.