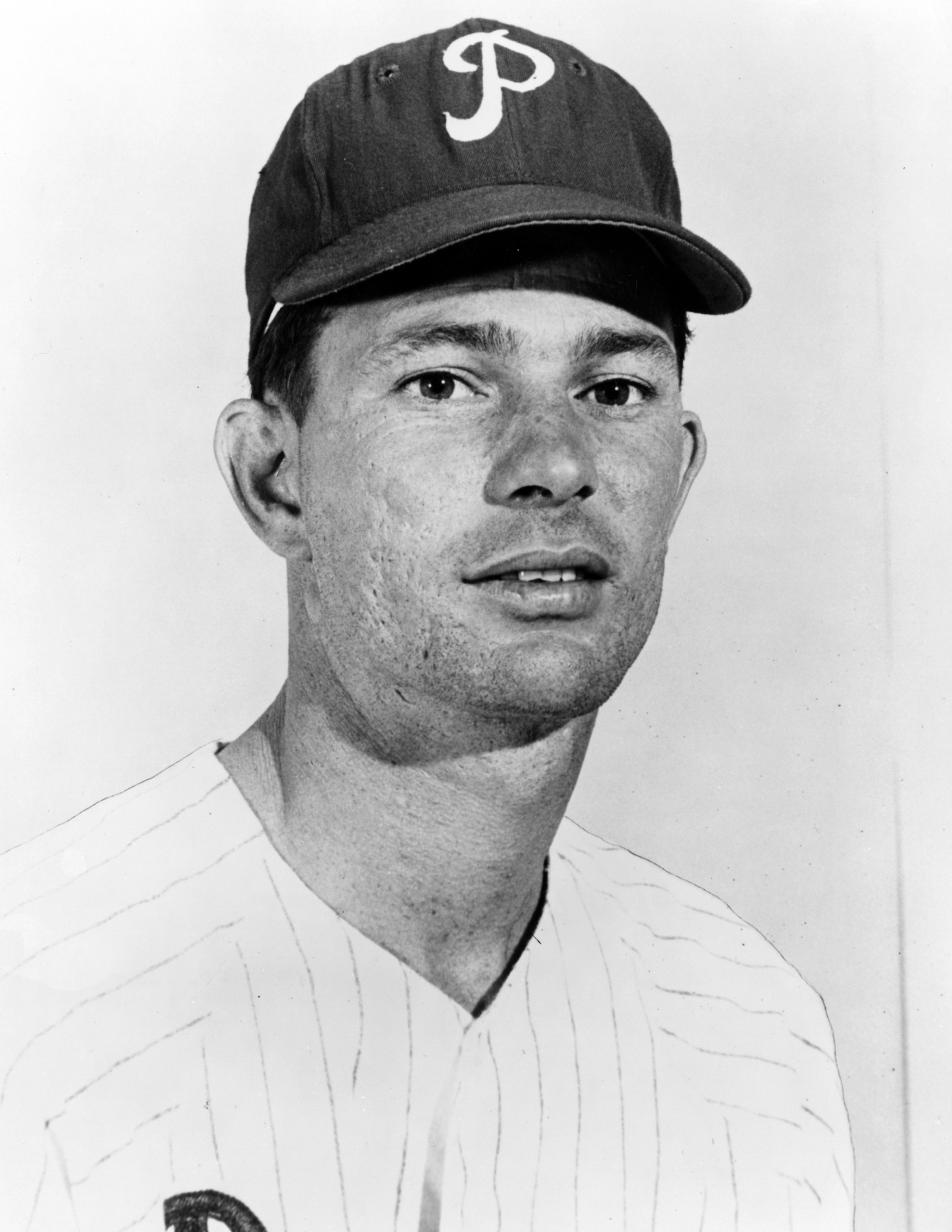 This article was written by Len Levin

Morrie Steevens was a St. Louis Cardinals fan as a child. Ironically, the Cardinals deprived him of his best chance to pitch for a major-league pennant winner when they overtook the Philadelphia Phillies in the final days of the 1964 season to finish in first place in one of the most improbable pennant races in baseball history.

Steevens, who pitched in four games for the Phillies in the last two weeks of the 1964 season, was born on October 7, 1940, in Salem, in south central Illinois, the fourth of five children born to Wilbert and Jaunita Wimberly Steevens (one child died in infancy).  His father was a machine operator for a concrete company in Salem. Steevens was interested in sports from an early age. When he was not in school, he spent most of his days outdoors, playing baseball, basketball, and football.

Steevens grew quickly into the 6-foot 2-inch, 175-pound frame he carried as a major-league pitcher. In high school he earned varsity letters in baseball, basketball, football, and track. Track and baseball were his best sports. He was a sprinter in track. His performance in the 100-yard and 220-yard dash helped his Salem Community High School track team gain conference championships in 1957 and 1958. He was a standout left-handed pitcher and hitter on the baseball team. In his senior year, 1958, he was the pitching and hitting star in a 4-2 victory that gave Salem Community High School a district baseball championship.

Steevens was first aware that major-league scouts were evaluating him during his senior year. The only team that offered him a contract, though, was the Chicago Cubs. On June 2, 1958, Cubs scout and minor-league manager Hersh Martin signed the 17-year-old for a $2,500 bonus, and he was assigned to Pulaski (Virginia) of the Appalachian League, the lowest level in the Cubs farm system, where Martin was the manager.

At Pulaski Steevens showed little command of any of his pitches. In 66 innings he walked 35 batters and surrendered 72 hits.

Despite his difficulties on the mound, the Cubs front office decided that Steevens’ arm was more valuable to them than his bat. From 1959 on, he was exclusively a pitcher, though he pinch-hit on occasion during his minor-league career.

In 1959 Steevens returned to his home state of Illinois to pitch for the Paris Lakers in the Class D Midwest League. The Lakers were managed by Verlon Walker, brother of major-league catcher and pitching coach Rube Walker. Steevens remembered Walker as encouraging him even when he struggled. Tom Sunkel, a former major-league pitcher who was the groundskeeper at Laker Stadium, also offered encouragement. As a result, Steevens lowered his earned-run average from 6.55 in Pulaski to 3.36 for Paris. Pitching a team-high 201 innings, he won 14 games and lost 12. He still was wild; he walked 117 hitters.

In 1961 the Cubs promoted Steevens to the San Antonio Missions of the Double-A Texas League, where his fortunes improved. He was 11-6 and his control was better. He was selected to the Texas League All-Star team. Off the field, he met his future wife, Arleen, who worked in the Missions’ front office. The couple married in 1962. They still resided in San Antonio as of 2013.

Steevens’ good season in Double-A earned him an invitation to major-league spring training in 1962. He performed well, and started the season with the Cubs. He made his major-league debut in the fourth game of the season, on April 13 against the St. Louis Cardinals at Wrigley Field. The game went deep into extra innings. In the top of the 15th, after the Cardinals took a 6-5 lead, Steevens relieved Bob Anderson with two men on base and two outs and pitched to one batter, Bill White, who hit a double that scored the runners inherited from Anderson.

The next day Steevens entered the game in the sixth to pitch to Stan Musial with the Cubs trailing, 7-1. Steevens remembered being nervous, but he retired Musial on a popup. Steevens was lifted for a pinch-hitter in the bottom of the inning.

After two more outings, the Cubs sent Steevens back to San Antonio, where he pitched 208 innings and won 15 games. The Cubs recalled him when big-league rosters expanded in September. Steevens pitched in six September games before getting the only start of his major-league career, against the Phillies at Connie Mack Stadium on September 19. He gave up four runs in 3? innings and took the 4-3 loss in a game curtailed by rain after six innings. In the second inning, Steevens had his only major-league at-bat, flying out with two runners on base.

Steevens began the 1963 season in Salt Lake City of the Pacific Coast League. His manager, Elvin Tappe, decided a few months into the season to use him as a reliever. Steevens resisted being sent to the bullpen, and openly clashed with his manager. As a consequence, the Cubs demoted Steevens to Amarillo of the Double-A Texas League. There Steevens was used mostly as a starter. Between the two teams he went 8-12. After bypassing him for a call-up when major-league rosters expanded in September, the Cubs traded Steevens to the Phillies.

As a Cubs farmhand, Steevens was primarily a starting pitcher. As property of the Phillies he decided to accept whatever role he was given. In 1964 he was assigned to the top Phillies minor-league team, the Arkansas Travelers of the Pacific Coast League. Steevens had an outstanding year and so did his teammates. He appeared in 39 games (12 as a starter), pitched 104 innings, compiled an 8-1 record, and posted a 3.63 ERA. For the year, he had 100 strikeouts against 34 walks allowed, for an impressive 3-1 ratio.

On September 9, 1964, with Arkansas needing a win to clinch the PCL’s Eastern Conference title, Steevens took the mound against the Dallas Rangers and responded with the game of his life. He pitched the second no-hitter of his professional career. The only Dallas baserunner reached on an error. Steevens was called up by the Phillies at the conclusion of his minor-league season. The Phillies were comfortably in first place when he reported. As every Phillies fan knows, they did not stay there.

Steevens made his first appearance for the Phillies on September 19 against the Los Angeles Dodgers at Dodger Stadium. The circumstances were similar to those of his Cubs debut. In the bottom of the 16th inning of a 3-3 game, with the speedy Willie Davis on third and Tommy Davis on first, Steevens relieved Jack Baldschun with two outs to pitch to Ron Fairly. With two strikes on Fairly, Willie Davis broke for home. Left-hander Steevens had his back to Davis as he delivered the pitch. The pitch was off the plate, Phillies catcher Clay Dalrymple was unable to make the tag on Davis, and the Dodgers won the marathon game by a 4-3 score.

The Phillies, playing against the Reds, Braves, and Cardinals, went on a ten-game losing streak beginning on September 21, when Chico Ruiz, with slugger Frank Robinson at bat for the Reds, stole home against Art Mahaffey for the only run of the game. Two defeats in a three-game span in which the winning run scored on a steal of home may have seemed like some kind of terrible omen, but Steevens said the Phillies did not see it that way. After each tough loss, he said, the attitude on the club was a determined resolve to get a win in the next game

Steevens pitched three times during the ten-game skid. He allowed three runs in the 2? innings he pitched, although only one run was earned. The Phillies routed the Reds on the last day of the season, but the Cardinals defeated the New York Mets to win the pennant. The plane ride home from Cincinnati to Philadelphia was a quiet one for Steevens and his teammates, but the silence was broken by the cheering of the 7,000 Phillies fans who were at the airport to welcome home their heroes.

In 1965 Steevens made the Phillies’ Opening Day roster. However, he did not get much of a chance to pitch. After surrendering five earned runs in 2? April innings, he was sent down to the Arkansas Travelers. Steevens had a good year in Triple-A, winning seven games and posting a 3.02 ERA. He was called up in September but because of injury he pitched in only game, against the Pirates on September 18. Coming out of the bullpen in the ninth inning with the Phillies leading 3-1, he faced just one batter, Donn Clendenon, whom he walked to load the bases. Ed Roebuck replaced Steevens and walked the next two hitters, tying the game. Then Bill Mazeroski bunted to push across the winning run and hand Steevens the loss in his last big-league appearance.

A few days after facing the Pirates, Steevens pitched batting practice at Chicago’s Wrigley Field. After returning to the clubhouse, he was unable to lift his left arm without pain. A checkup determined that the problem was caused by a calcium deposit on his collarbone. Steevens had surgery after the season, but it was only partly successful. Although he was able to pitch pain-free, his effectiveness was reduced.

Steevens’ last two years in professional baseball were spent in the minor leagues. In 1966 he began the season with the Phillies’ Triple-A affiliate in the Pacific Coast League, the San Diego Padres. While at San Diego, he was loaned to the Phoenix Giants. Steevens had a poor season, posting a 4-11 record with a 4.29 ERA in 126 innings. He started 1967 with Double-A Reading, but was used infrequently. It was obvious that the Phillies no longer considered Steevens a major-league prospect. He did not pitch much, even though he was healthy. The Phillies released Steevens before the 1967 season ended, bringing his ten-year professional baseball career to a close.

In his brief major-league career, Steevens never pitched in a big-league game other than in April or September. He lost his only two decisions. In 20? major-league innings, his ERA was 4.43. In eight of his 22 games he pitched to only one batter. Steevens was wild: He threw two wild pitches, hit one batter, and walked 16 of the 97 batters he faced.

After his baseball career ended, Steevens and his wife returned to live year-round in San Antonio. During some offseasons Steevens had worked in San Antonio as a part-time deputy sheriff, and also worked for the Bexar County tax assessor’s office. After he left baseball, Steevens worked for the tax assessor’s office full time until 1980. In that year he joined Klein and Barenblat, a tax consulting firm in San Antonio, and worked there five years until he became a partner in the firm. The partnership dissolved in 2012. Morrie also devoted time to coaching his grandson, Ty Williamson, whose dream was to play in the big leagues like his grandfather.

All of the original research for this biography was done by SABR member Stan Opdyke.

E-mail to Stan Opdyke from Mike Curto, broadcaster for the Tacoma Rainiers.