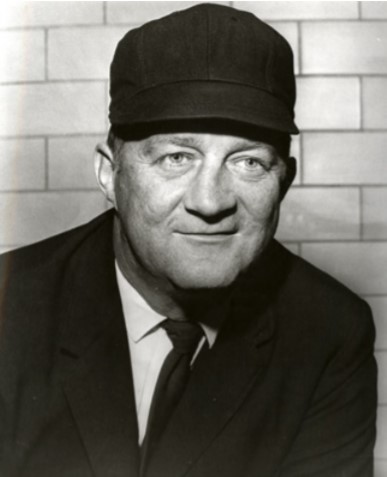 “Considered by many to be the nonpareil umpire of the Post-War Era. A model of consistency with invariable accuracy both behind the plate and on the bases.” Those words on Nestor Chylak’s Baseball Hall of Fame plaque describe him well. An American League umpire from 1954 through 1978, Chylak was highly respected by managers, players, and league officials for his skills at keeping the game moving and avoiding being the center of attention.1 His posthumous election to the Hall, the eighth umpire so honored, was a testament to his umpiring accomplishments.2

Chylak was born on May 11, 1922, in Olyphant, Pennsylvania, near Scranton in the northeastern part of the state. His parents, of Ukrainian descent, were Nestor George Chylak Sr. and Nellie (Shipskie) Chylak, both first-generation Americans.3 His father operated a bar.4

Nestor was the oldest of five children. He had two sisters, Mae and Julie, and two brothers, Gene and Joseph, who died at the age of 2.5

Chylak attended Rutgers University briefly in 1939-1940, but his studies were interrupted by military service in World War II.6 A sergeant in an Army Ranger battalion, Chylak served in the Army in the European theater and was wounded on January 3, 1945, during the Battle of the Bulge, when fragments of a tree hit by shrapnel smashed into his face.7 For 10 days, he could not see, but eventually recovered his eyesight. Chylak was awarded a Purple Heart for his wound and a Silver Star for gallantry in action.8

Chylak almost never talked about the horrors of the battlefield. His son Bill thought Nestor’s generosity and kindness to people grew out of his loneliness on the road, but another son, Bob, said the friends their father lost in battle had something to do with it.9

Returning to the United States after the war, Chylak briefly resumed his college studies at the University of Scranton, but did not finish his degree.10  He wanted to play baseball, but a shoulder injury prevented him from doing so. He decided to try umpiring.11  In 1946 Chylak began umpiring amateur baseball games in the Northeastern Pennsylvania League. He decided to pursue umpiring as a career, beginning in the minor leagues in 1947. On April 13, 1954, at Griffith Stadium in Washington, Chylak made his debut in the American League. He worked third base in the 10-inning game, the Senators prevailing over the Yankees, 5-3.12

Thus began a major-league career that spanned 25 years and 3,857 regular-season games. Chylak was a home-plate umpire for 974 games.13  He was a crew chief for 14 years, mentoring rookie and younger umpires.14

Chylak’s son Bob cited his father’s on-field demeanor as a key to his success. He was decisive, consistent, authoritative, and unflappable. He let players have their say and then moved on. Once a manager or player stopped arguing, he let the dispute drop.15

Chylak had the baseball rulebook memorized by paragraph and by section, ensuring that he knew the rules cold. His preparation meant he never lost an argument, even to well-informed managers like Earl Weaver.16  Chylak was proud of the fact that he never threw Weaver out of a game.17  In his 25 years as a major-league umpire, Chylak ejected only 24 players, managers, and coaches, and ejection rate among the lowest in major-league history.18

Chylak’s sense of humor served him well as an umpire. He had a ready wit. He once said, “The way I see it, an umpire must be perfect on the first day of the season and then get better every day.”19  At the Umpire Exhibit at the Hall of Fame, a plaque gives this Chylak quip: “This must be the only job in America that everybody knows how to do better than the guy who’s doing it.”20

When Chylak died in 1982, Commissioner Bowie Kuhn said, “Few have ever been more respected in his field. Everyone looked up to him, and I developed more respect every time I saw him in a World Series or All-Star Game.”21  When Chylak was inducted into the Hall of Fame, Harmon Killebrew called him “one of the best umpires in the American League for years and years,” and added, “I think he had a great rapport with the players.”22  Jim Palmer said, “I think anybody who ever played while Nestor umpired understood how much he loved the game and how much he loved people.”23  Brooks Robinson called him “my favorite umpire.”24

Yogi Berra called Chylak “an umpire’s umpire,” saying, “He kept the game under control, but he would also listen to you when you had a beef.”25  But fellow umpire Don Denkinger said he was “a pitcher’s umpire.” Chylak’s philosophy was to never call a strike a ball. Former player and coach Dick Tracewski opined that Chylak thought it was acceptable to call a ball a strike once in a while, but never the opposite because it slowed the game down.

In a time when selection for postseason and All-Star Games was based on merit, Chylak was chosen to umpire in five World Series, three League Championship Series, and six All-Star Games. His first World Series was in 1957, when he worked the left- and right-field lines for all seven games of the Yankees-Braves Series. Chylak also umpired in the 1960, 1966, 1971, and 1977 World Series, serving as crew chief in 1971 and 1977.26

Chylak umpired in the American League for his whole major-league career; he retired long before the umpiring staffs were consolidated. He was behind the plate for the first major-league game in Toronto, in Exhibition Stadium in 1977, a contest made memorable by a snowstorm during the game. He called balls and strikes in Sandy Koufax’s last major-league contest, Gamne Two of the 1966 World Series.27  Chylak was the plate umpire when Bert Campaneris threw his bat at pitcher Lerrin LaGrow during a 1972 playoff game. Nestor ejected both players.

He was the third-base umpire for the 1974 “Ten Cent Beer Night” game between Cleveland and the Texas Rangers on June 4, 1974.28  The players were doused by beer by midgame. Hundreds of inebriated fans stormed the field in the ninth inning. Both teams fled the field for their own safety. The fans stole the bases and threw objects including bottles, rocks, cups, radio batteries and folding chairs. Chylak was struck in the head and cut by part of a stadium chair and also hit in the hand by a rock. The crew chief, he realized that order could not be restored and forfeited the game (tied at the time) to Texas.29

Chylak’s career ended in Toronto in July 1978 when he became ill working a night game after a spell of difficult travel. His umpire colleagues asserted that he suffered a mild stroke, but family members said he was suffering from exhaustion.30

After retiring from the field, Chylak became an assistant supervisor of umpires for the American League. He was present in Chicago on Disco Demolition night, July 12, 1979. Between games disco records were blown up on the field. Then thousands of spectators stormed the field and a riot was on. Chylak informed Bill Veeck, the owner of the White Sox, that the second game could not be played. Despite Veeck’s protest, the American League president Lee MacPhail upheld Chylak’s decision. The next day MacPhail ordered the second game forfeited to Detroit rather than rescheduled.

In retirement, Chylak became a member of the Sports Illustrated Speakers’ Bureau,31  speaking about the intangible lessons he had learned from his years umpiring baseball. His son Bill said that his father was the biggest politician on behalf of baseball there ever was.

Chylak gave baseballs, bats, and other memorabilia to friends, family, and sometimes even total strangers. Chylak visited patients in the Veterans Hospital in Plains, Pennsylvania, each week. During the offseason he spoke to Little Leaguers, Boy Scouts, and others without charge.32  As evidenced by baseballs and cards signed by Chylak on auction on eBay, Chylak signed his autograph with the words “Play Hard and Fair.”

Chylak died at home in Dunmore, Pennsylvania, of an apparent heart attack on February 17, 1982, three months before his 60th birthday. He is buried in SS. Cyril and Methodius Catholic Cemetery in Peckville, Pennsylvania. Chylak was survived by his wife, the former Sophie Shemet, and his two sons.33

Chylak was inducted into the National Baseball Hall of Fame in July 1999 after election by the Veterans Committee. (A committee in his home area had begun lobbying the Veterans Committee on behalf of Chylak, collecting signatures and letters of endorsement.)34  Chylak’s son Bob spoke at the induction ceremony.35

This biography is included in “The SABR Book on Umpires and Umpiring” (SABR, 2017), edited by Larry Gerlach and Bill Nowlin.

4 “A Tribute to Nestor Chylak.”

7 “A Tribute to Nestor Chylak.”

12 Kashatus, 56-57. See Retrosheet.org for details on each game of Chylak’s major-league career.

13 Sean Lahman, The Baseball Archive, seanlahman.com/baseball-archive/statistics/. Accessed October 4, 2014. Chylak’s first assignment working the plate was in the first game of a doubleheader at Fenway Park on April 18, 1954.

28 Kashatus, Diamonds in the Coalfields, 89.