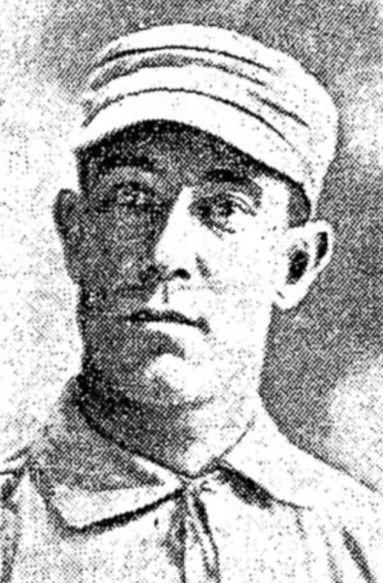 Orel Hershiser set a major-league record by pitching 59 consecutive scoreless innings in 1988, but he was well behind the mark established by Oliver “Rube” Faulkner, who pitched 78 consecutive scoreless innings in 1903 for the Wilmington (Delaware) Athletics.1 Faulkner was an enigma. A right-hander blessed with talent, he declined opportunities to pitch in the major leagues.

Born December 16, 1872, in West Dover, Delaware, Oliver H. Faulkner grew up on the family farm there. He was the second youngest of six children born to Thomas and Annie Faulkner.2

Information on Faulkner’s early life has not come to light.3 As a young man, he pitched for amateur teams. In 1900, at the age of 27, he attracted attention by pitching for North Attleborough, Massachusetts, in a series of games against neighboring Attleboro. Reporting on the game of August 4, which was won by North Attleborough, 9-1, the Boston Globe revealed Faulkner’s forte:

“At the opening of the game the swift delivery of Faulkner gave the Attleboro boys the opinion that the pitcher’s box was too near. A dispute followed and umpire [John H.] Gaffney ordered the distance measured. It proved to be all right and playing was resumed.”4

During the game of August 18, “the police found much to do, as betting was plenty and fights [between rival fans] were numerous.”5 Faulkner and his blazing fastball were less effective in this contest, though his team prevailed, 10-9. A week later, he blanked Attleboro with a three-hit shutout.6 Duly impressed, the Worcester, Massachusetts, club of the Class-A Eastern League signed Faulkner to a contract, but he inexplicably “jumped the club after one day’s practice.”7

In 1901 Faulkner was invited to spring training with the Boston Beaneaters of the National League. The Baltimore Sun said, “He is a six-footer, weighs 175 pounds and has great speed, curves and command.”8 According to sportswriter Jacob C. Morse, Faulkner was impressive at spring camp and “will doubtless make his mark sooner or later.”9 Faulkner became ill or homesick (reports varied), so manager Frank Selee permitted him to return home to Delaware with the understanding that he would rejoin the Beaneaters in Philadelphia on April 23.10 But Faulkner went home and stayed home. Tired of waiting for his return, Selee issued his unconditional release on May 2.11

Faulkner reappeared on a Hoboken, New Jersey, team and pitched “a splendid game” in a 4-3 victory over the New York Giants on June 30; he fanned 11 batters, including Kip Selbach five times.12 From mid-July through the end of the 1901 season, Faulkner pitched 10 miles from North Attleborough in Woonsocket, Rhode Island, as a member of an independent professional team known as the Woonsocket Gymnasiums. In Woonsocket on September 30, he surrendered 14 runs while his teammates were afflicted with “a bad case of stage fright” and committed 13 errors, against a team of major-league stars that included future Hall of Famers Nap Lajoie and Roger Bresnahan.13 Lajoie, a Woonsocket native, led the major leagues with a .426 batting average in 1901, and 5,000 fans were there to see him. Faulkner held him to one hit, a ground-rule double, and kept Bresnahan hitless.

On Opening Day, May 24, 1902, in Woonsocket, with 4,000 fans on hand, Faulkner hurled a no-hitter against Milford (Massachusetts).14 Two months later, he signed a contract with the Detroit Tigers of the American League. He met up with his new team at a Boston train station on July 29, but suddenly got cold feet.

“Faulkner was on hand at the depot 10 minutes before the time for the train to leave, and had his grip and uniform case with him. Suddenly he took a notion he wanted a lunch, and went across the road to get it. He did not come back…”15

After bailing on the Tigers, Faulkner finished the 1902 season with the Woonsocket Gyms, and the next spring he joined the Wilmington Athletics, an independent professional team in his home state of Delaware.16 The Athletics wore caps and uniforms that were white flannel with black trim and a black “W” on the shirt front.17 On April 28, 1903, the team was defeated 6-4 by the Cuban X-Giants, one of the top Negro clubs of the era; Faulkner and the X-Giants’ Danny McClellan each allowed seven hits in the contest.18 On May 6, Faulkner and the Athletics were crushed by the Philadelphia Phillies, 10-2.19 But three days later, he tossed a two-hitter and fanned 11 in Wilmington’s 4-1 triumph over West Chester of New York.20

On May 14, Faulkner allowed 12 hits as the Athletics edged Sol White’s Philadelphia Giants, 6-5.21 Faulkner shut out Villanova on May 30, and two other Pennsylvania teams: Reading on June 11, and Pottsville on July 3.22 He outdueled the great Rube Foster in a 4-2 victory over the Cuban X-Giants on July 10.23 And he pitched consecutive four-hitters against two more Pennsylvania clubs: Harrisburg on July 21 and Williamsport three days later.24 Faulkner was poised to make history.

From July 29 through August 27, 1903, Faulkner pitched 78 consecutive scoreless innings, including seven shutouts in a span of 22 days. According to numbers tabulated by the author from box scores, Faulkner allowed 31 hits in those 78 innings, struck out 59 and walked 11.

In the second inning on July 29, Brandywine of West Chester, Pennsylvania, scored four runs off Faulkner, but he blanked them for the next seven innings to start the streak, and the Athletics came from behind for a 5-4 victory.25 Three days later, Faulkner won a pitcher’s duel, 1-0, against Red Donahue and Wissahickon, Pennsylvania. Donahue was a major-league pitcher who had recently left the St. Louis Browns over a dispute with management.26

Faulkner’s next appearance came against the “All Cubans,” a barnstorming team of stars from the Cuban National League. According to historian Michael E. Lomax, the team compiled an 89-28-1 record during its 1903 US tour.27 But on August 5, they fell to Faulkner and the Athletics, 9-0.28

On August 8, Faulkner fanned a dozen Shamokin, Pennsylvania, batters in a 3-0 conquest.29 And two days later, he defeated Rube Foster in a 1-0 nail-biter; Faulkner “had the Cuban X-Giants at his mercy shutting them out and allowing but two hits.”30

In a 5-0 victory on August 14, Faulkner ran his streak to 50 innings by delivering a one-hit shutout against Allentown, Pennsylvania, in a game that was called after seven innings on account of darkness.31 The next day, 8,000 fans saw the Athletics beat the Chicago Cubs, 4-3, in Wilmington.32 Faulkner pitched the last three innings, shutting out the Cubs on one hit; under modern scoring rules, he earned a save. The Cubs were managed by Frank Selee; this was perhaps the first time Selee had seen Faulkner since Faulkner’s desertion in the spring of 1901.

By scores of 3-0 and 6-0, respectively, the Athletics defeated two Pennsylvania teams, Pottsville on August 18, and Steelton YMCA on August 22. Faulkner threw a two-hitter in each contest.33 The Wilmington News Journal stated it succinctly: “Faulkner is a wonder.”34

The streak came to an end on August 27. After seven scoreless innings, Pottstown rallied to score three runs off Faulkner in the eighth inning and won the game, 3-2.35

As Faulkner’s remarkable streak was reported by newspapers nationwide, he and the Athletics reeled off more victories. On Labor Day, September 7, he pitched and won both games of a doubleheader against Brandywine.36 And later in the month, he shut out consecutively Manchester, New Hampshire, Camden, New Jersey, and Penn Park of York, Pennsylvania.37 He was defeated, though, by two National League teams, 6-0 by the Boston Beaneaters on September 10, and 6-2 by the Brooklyn Superbas on September 30.38

According to unofficial numbers reported by the Rochester (New York) Democrat and Chronicle, Faulkner compiled a 30-11 record in 1903 with 14 shutouts. He struck out 230 and walked 55.39 After the season, he received offers from the Rochester Bronchos of the Eastern League and from the Detroit Tigers, and chose to pitch for Rochester in 1904. Because Faulkner had signed a contract with the Tigers in 1902, the Detroit club held his rights and the Bronchos were required to purchase them from Detroit.

The success Faulkner enjoyed with the Wilmington Athletics in 1903 did not translate to a successful season in 1904. He faced tougher competition in the Eastern League and was poorly supported by the Bronchos, the weakest team in the league. He posted a 6-13 record, struck out 94 and walked 62,40 and was accused by the Democrat and Chronicle of “laying down” (not trying) in two games against the Toronto Maple Leafs in early August.41 Faulkner then jumped his contract and rejoined the Wilmington Athletics, now part of the independent Tri-State League. On the Athletics, he shut out Penn Park and Harrisburg,42 but his season ended early when he was suspended for refusing to go on a road trip with the team.43 He preferred to go bird hunting.44 He was an avid hunter and expert marksman.

The Bronchos, desperate for pitching help, welcomed Faulkner back in 1905, and he compiled a lackluster 11-18 record in 287 innings. He was released the following spring for failing to keep in condition,45 and he pitched briefly for the Baltimore Orioles during the 1906 season.

In the spring of 1907, Faulkner pitched for the Wilmington Peaches of the Tri-State League, until he asked for and received his release from the team in May. He was upset over a $10 fine imposed by manager Charlie Atherton. “If you take $10 out of my salary, you can take it all,” said Faulkner.46 He was now 34 years old and his career was over. Meanwhile, a 19-year-old phenom named Walter Johnson pitched 77 consecutive scoreless innings for a Weiser, Idaho, club.

Oliver Faulkner lived out his years in Hartly, Delaware, a small town with a population of about 125. He was a lifelong bachelor, an “expert carpenter,” and a “familiar but quiet figure” known to Hartly residents as “Oll.”47 On the occasion of his 82nd birthday in 1954, the Hartly Lions Club honored him with a testimonial banquet.48 Among the attendees were former major league stars, Frank “Home Run” Baker and Bill Nicholson.49 Faulkner died in Hartly on May 13, 1956, at the age of 83.

This biography was reviewed by Rory Costello and David Lippman and checked for accuracy by SABR’s fact-checking team.

1 Many period newspapers incorrectly reported Faulkner’s streak as 76 or 77 innings.

3 Except for the 1880 US Census record, which told Faulkner’s place in his family, research did not reveal anything about him prior to 1900.