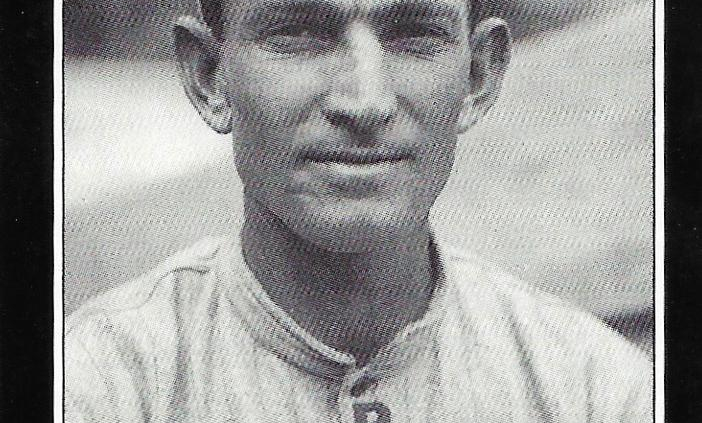 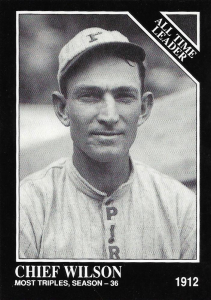 Owen Wilson is most remembered for hitting 36 triples in 1912, which is not only a major league record, but also a record for all of organized baseball. To the modern fan, that fact conjures up images of a speedy leadoff hitter racing around the bases, but that image does not square with Owen Wilson. At 6′ 2″ and 185 pounds, the left-handed hitting slugger was powerfully built and not particularly fast (his 1912 stolen base total of 16 was one shy of his career best), and he typically batted sixth or seventh in the batting order. Wilson typically blasted his triples over the heads of rival outfielders. “A three-base hit may usually be made only by driving the ball clear to the fence, particularly toward center field on most grounds,” he once said. “I made 36 triples my best year, but not a few of those long drives would probably have been homers had they not been stopped by the fence.”

John Owen Wilson was born on August 21, 1883, at his family’s ranch in Bertram, Texas, about 50 miles north of Austin. He was the strong, silent type-roommate Bobby Byrne later recalled that “he wouldn’t say two words all day.” Possessed of a rifle-like throwing arm, Owen began his career in baseball as a right-handed pitcher with various independent teams before hooking on as an outfielder with the Austin team in the Texas League in 1905. When that league folded on June 6, he joined the eventual pennant winner, Ft. Worth, playing there for two seasons. He moved up to Des Moines in the Western League for the second half 1907, where he hit .323 in 50 games.

The Western League’s best pitcher was Denver’s Babe Adams. When Adams joined the Pittsburgh Pirates at the end of the season, he apparently told Barney Dreyfuss that he couldn’t get Wilson out. As Adams told it, “I told him about this fellow playing for Des Moines who could really powder the ball … I had a lot of respect for him, not only as a hitter but as a fielder. He had a tremendous arm.” Wilson was duly signed by the Pirates, and was their starting right fielder in 1908.

The Pirates signed “Tex” Wilson and made him their right fielder in 1908. Wilson was an extremely quiet man, and he soon earned the nickname “Chief” not for having Native American blood, but for looking, to manager Fred Clarke – like a “Chief of the Texas Rangers.” At a pre-season gala at Clarke’s ranch in Winfield, Kansas, Wilson impressed Clarke with his ability to handle a lariat.

Handling a bat proved to be another matter. In his rookie year he was one of the worst offensive players in the league, as he hit .227 in 144 games, and all but 18 of his 120 hits were singles. The fans in Pittsburgh booed him regularly. The fact that this weak-hitting rookie played every day for a team that almost won the pennant is a testament to his defensive play. His fine fielding, especially his rifle arm in right field, drew comments early in his career. He hit from the left side, but he threw out enemy base runners with his right arm. He regularly recorded 20 assists per year, leading the league with 34 in 1914.

Wilson played a crucial, though unnoticed, role in the 1908 pennant race. On September 4, the Pirates hosted the Cubs, and Wilson won the game with a single in the bottom of the tenth inning. On the play, Cubs’ second baseman Johnny Evers noticed that the Pirate runner on first, Warren Gill, in keeping with the custom of the time, if not the rules, failed to touch second base once the winning run had scored. Evers failed to convince umpire Hank O’Day, who had run off the field, but O’Day resolved to watch for such a play in the future. On September 23, O’Day called New York Giant Fred Merkle out on a similar play, which ultimately helped the Cubs defeat both the Giants and the Pirates by a single game that year.

In 1909, Wilson played every game for the pennant-winning Pirates, gaining the respect of the fans by raising his average to .272 and showing some power with 22 doubles and 12 triples. In the World Series, on the other hand, he managed only four hits in 26 times up, for a .154 average. In 1910, he had about the same year: .276 with 31 extra-base hits.

The 1912 season was similar to 1911, as he hit again hit exactly .300, except that many of his doubles (dropping to 19) became triples (the record 36). He hit 11 home runs, which was good for third in the league, and his slugging percentage of .513 was second. He hit his triples in streaks. He had 11 by the end of May and then played 14 games without one. Beginning on June 17, he hit triples in five straight games. On August 27 he hit his 33rd in the 118th game, a pace that would have led to 43. He then went into a triple slump, hitting only three in the last 34 games. He was still hitting, as this comment from the Pittsburgh Post on September 14th might attest: “Wilson attempted to triple, but tapped the pellet a trifle too hard and it floated over the right field wall.” He did not just feast on the lesser pitchers either; his 1912 triple victims included Christy Mathewson, Pete Alexander, Mordecai Brown, Rube Marquard, and Ed Reulbach.

He was not hitting ground balls that rolled into the gaps, as the Sporting Life pointed out on September 7: “Few of the smashes have struck in front of fielders. They have all been over the heads or between the fields, all juicy jams.” He hit two inside-the-park home runs, and twice was thrown out at home trying to stretch triples. The second time was in the ninth inning of the Pirates’ final game on October 6. The bases were loaded, and he was out trying for his second grand slam of the season. Instead, he settled for his 36th triple.

Wilson shattered the triples record that had been set in 1886 by Dave Orr and tied in 1894 by Heinie Reitz. The new mark received little attention in the press at the time, likely because, according to a 1913 article by Ernie Lanigan, a typo in the record book had credited Napoleon Lajoie with 43 triples in 1903 instead of the 11 he actually hit.

Wilson enjoyed an advantageous context for his record: the 1912 Pirates still hold the all-time team record for triples with 129—if Wilson hadn’t hit any triples, the Pirates still would have led the league. The 685 triples hit by the 1912 National League is still the most ever for a single league season, even with expansion. Spacious Forbes Field may have been the best park ever for triples, and the Pirates led the NL in that category 30 of the 62 seasons they played there. Wilson did hit 24 of his 36 triples at home, but it is likely that many of these triples would have been home runs at other parks. Many accounts of his triples describe the ball being slugged over an outfielder’s head. Finally, a lot of great Pirates played at Forbes Field, many of them good triples hitters, and none of them approached Wilson’s feat.

Wilson’s days as a star were over. In 1913, he played every Pirate game for the third time, but fell to .266 and 14 triples (fourth in the league). After that season he was dealt to the Cardinals in an eight-player swap, with whom he finished his career by playing three years. In 1914, his 12 triples were good for second in the league, but his hitting skills faded quickly after that. After his nine-year major league career, Wilson briefly returned to the Texas League to play for San Antonio in 1917 (16 games).

Once retired, Wilson slipped into oblivion. On February 22, 1954, he died suddenly while working on his ranch near Bertram, Texas, where he had been born 70 years before. A few years later, Bobby Byrne, a former roommate with the Pirates, summed Wilson up by saying, “He was a gentleman, [and] a great ball player.”

Chief Wilson file at the National Baseball Hall of Fame.