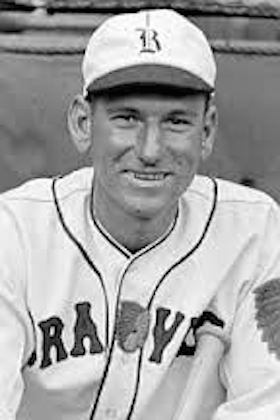 “Pinkey Whitney is the greatest third baseman in baseball,” said Grover Cleveland Alexander in 1930. During a 12-year career, Whitney played for two National League doormats, the Philadelphia Phillies and the Boston Braves. “It’s a shame he couldn’t have gotten with a winning club,” Alexander said. “That boy is a wonderful fielder and one of the most dangerous hitters in the game.”1 In eight of his 12 seasons, Whitney ranked either first or second in fielding percentage among NL third basemen. In his first five seasons, he batted .312 and averaged 107 RBIs per season. Learning to play third base is like learning to dance, said Whitney – “you stumble around for a while and then all of a sudden it comes to you!”2

Arthur Carter Whitney was born on January 2, 1905, in San Antonio, Texas. His parents were John B. Whitney (1865-1920) and Amelia (Greider) Whitney (1874-1954).3 John, a native Texan, was “a conductor on the San Antonio and Aransas Pass railway.”4 Amelia was born in Switzerland. Census records show that John and Amelia had six sons and three daughters, and that Arthur was the third youngest of the nine children.5

As a boy, Arthur was nicknamed Pinkey6 after a comic-strip character, and the name stuck throughout his life.7 He attended Brackenridge Grammar School and Brackenridge High School in San Antonio.8 Pinkey was the best athlete at his high school, captain of the baseball and football teams, and an outstanding basketball player.9 He graduated in 1924.

The Whitney family lived near League Park, home of the San Antonio Bears of the Texas League, and the spring-training site of the New York Giants from 1920 to 1923. Teenage Pinkey idolized hometown hero Ross Youngs of the Giants and hung out at the ballpark whenever the Bears or Giants were playing. Amelia was concerned that Pinkey was loafing there, so he took a job selling seat cushions at games. After John died in 1920, Amelia provided room and board to Bears players to earn extra income. Interacting with these players increased Pinkey’s desire to play professional baseball.10 (In 1922 Pinkey’s older brother Rodney began a long career as a minor-league catcher. Pinkey’s younger brother Robert had a short career as a minor league outfielder.11)

In 1924 Pinkey played shortstop for a team representing the Alamo-Peck Furniture Company of San Antonio.12 He caught the eye of Cleveland Indians scout Cy Slapnicka, who offered him a $2,500 bonus to sign with the Indians.13 Amelia needed the money to make ends meet for her large family, so Pinkey accepted the offer, forgoing a scholarship from the University of Texas.14 The Indians assigned him to the Decatur (Illinois) Commodores of the Illinois-Indiana-Iowa (Three-I) League.

Whitney played shortstop and third base for Decatur, batting .326 in 1925 and .286 in 1926.15 In 1927 he played third base and hit .336 for the New Orleans Pelicans, and helped the Pelicans win the Southern Association pennant.16 The New Orleans Times-Picayune called him the most consistent player on the Pelicans.17 Although Baseball-reference.com lists his height as 5-feet-10, Whitney may have been only 5-8.18 He weighed 165 pounds. He was a right-handed batter and thrower.

The Philadelphia Phillies drafted Whitney in October 1927, and he went to spring training with the team in 1928. In an exhibition game against the Philadelphia Athletics, the 23-year-old rookie was welcomed to the big leagues by 41-year-old Ty Cobb, who slid hard into third base and spiked him in the knee. Years later, Whitney recalled the incident:

“I’d already tagged him but when I picked myself up I slammed him in the back of the head with the ball. He just got up and ran back to his dugout but the next time he passed me on the field, he said, ‘It’s a good thing you’ve got a weak arm, kid, or you might have knocked my head off.’”19

In the season opener at Brooklyn, on April 11, 1928, Whitney singled off Jesse Petty for his first major-league hit. In the first game of a doubleheader in Brooklyn on June 30, Whitney homered off Dazzy Vance in the seventh inning and singled off him with the bases loaded in the 13th inning, as Philadelphia prevailed, 4-3.20 In the second game of the doubleheader, Whitney homered off Petty. Whitney had a 19-game hitting streak from August 4 to 22. He finished the season with a .301 average and 103 runs batted in. His .955 fielding percentage was bettered by only one NL third baseman (Freddie Lindstrom, .958). Sportswriter Thomas Holmes described the impressive rookie:

“The best all-around star of the Philadelphia infield is Arthur Whitney, called ‘Pinkie’ for the boyish mildness which he does not possess. Whitney wears his cap low over a pair of piercing black eyes and carries his underslung chin thrust outward like a light heavyweight pugilist. He is a good hitter and a bear at bat with men on bases. And there are few better third basemen anywhere than Pinkie Whitney.”21

The Phillies had another impressive rookie, Chuck Klein, who batted .360 in 1928. Whitney and Klein were roommates and became lifelong friends.22 Despite their contributions to the team, the Phillies finished in last place in 1928 with a 43-109 record, the franchise’s worst record in 46 seasons. The team improved to fifth place in 1929, as Whitney batted .327 and drove in 115 runs. On May 6, 1929, his ninth-inning single gave Philadelphia a 2-1 victory over the Chicago Cubs.23 On July 30 he went 4-for-5 with a double, two triples, and a home run, as the Phillies clobbered the Pittsburgh Pirates, 13-5. “Whitney is the kingpin of my team,” said Phillies manager Burt Shotton.24

In 1930 Whitney batted .342 with 117 RBIs and led the major leagues in putouts, assists, and double plays by a third baseman. The St. Louis Cardinals and Chicago Cubs sought him in a trade.25 In December 1930 Phillies owner William Baker died seven hours before he was to sign the paperwork that would have sent Whitney to the NL champion Cardinals, and by this quirk of fate, Whitney remained a Phillie.26 In 1931 Whitney’s 19-game hitting streak from May 16 to June 5 raised his season average to .352, but it dropped to .287 by season end as he was bothered by “a dislocation of the pelvis bone structure.”27 In the offseason, Whitney and Klein enjoyed hunting and fishing in Texas.28

Manager Shotton named Whitney the captain of the Phillies in 1932.29 On July 3 he went 3-for-5 with a home run and four runs batted in as the Phillies defeated Dazzy Vance, 4-3, in Brooklyn. Whitney also homered off Burleigh Grimes and Dizzy Dean during the season and finished the year with a .298 average. He ranked third in the league with 124 runs batted in, and he led NL third basemen in putouts, assists, double plays, and fielding percentage.

Off the field, Whitney was quiet, reserved, and soft-spoken; on the field, he was a fierce competitor. He was regarded as one of the best curveball hitters in baseball and one of the best at hitting behind the runner on a hit-and-run play.30 Cardinals’ catcher Jimmie Wilson said, “He won’t help you any by going after bad balls. And he’s twice as mean with runners on the cushions.”31 Whitney can “belt your brains out” with his “slashing drives,” said Pie Traynor.32 The Charleston (West Virginia) Daily Mail extolled Whitney’s fielding:

“He can dive full length over the bag for a drive down the foul line, bound back to his feet and throw the runner out. He can slip like a goose in front of the shortstop, spear the ball in his glove and throw in almost one motion. And he has scarcely an equal at coming in for the slow ones, taking them in his bare hands and shooting them to the bag.”33

Whitney missed the first 20 games of the 1933 season after injuring his back in spring training.34 He was hitting .264 in mid-June when the Phillies, desperate for cash, traded him and outfielder Hal Lee to the Boston Braves for two players and an undisclosed amount of cash said to be between $50,000 and $75,000.35 Reportedly, Whitney’s pal Klein “broke down and cried” upon hearing of the trade.36 After the season, Klein, too, was traded by the Phillies, to the Cubs for three players and $65,000.

In Whitney’s first games as a Brave, he went 6-for-11 in Boston’s doubleheader sweep of Philadelphia on June 17, 1933. Four days later he drove in five runs as the Braves took a doubleheader from the Pirates. Despite this strong start, Whitney batted only .246 for his new team. The next year, as the Braves’ captain,37 he hit .259 and led NL third basemen in fielding percentage. He married Audrie Leona Boyd in 1934, and their son, Arthur Jr., was born in 1935.38

After a fourth-place finish in 1934, the Braves dropped to last place in 1935 with a miserable 38-115 record. (The 1935 team had Babe Ruth in its lineup in April and May, in his final major-league season.) On August 14 Whitney went 4-for-9 with two triples and seven runs batted in as the Braves swept a doubleheader from the Cincinnati Reds. His 1935 season average was .273.

The Phillies reacquired Whitney and Klein in 1936, but the team finished in last place under manager Jimmie Wilson. Whitney went on a tear from May 18 to 22, going 9-for-16 with 4 home runs and 14 runs batted in. He played in the All-Star Game on July 7. Facing Lefty Grove, he lined out to deep center field in the second inning, and Gabby Hartnett scored on the sacrifice. In the fourth inning Whitney singled off Schoolboy Rowe. However, Whitney hurt his thumb in the game39 and missed the next 15 games of the season. He finished the year with a .284 average.

In 1937 Whitney hit .341, fifth best in the league, and led major-league third basemen with a career-high .982 fielding percentage. He credited his batting resurgence to the change he made from a 38-ounce bat to one of Klein’s 32-ounce models.40 Whitney deserved selection to the All-Star team once again, but he was snubbed by NL manager Bill Terry, who chose a shortstop, Arky Vaughan of the Pirates, as the NL third baseman. It was a controversial choice – Vaughan had never before played third base in the major leagues. Jimmie Wilson was outraged: “How could Terry overlook Whitney, who is hitting around .360 and playing the finest third base of his career?”41

The 33-year-old Whitney appeared in 102 games in 1938, including 24 games as a pinch-hitter, and batted .277. The following season, his last in the majors, he played in 34 games, batted .187, and served as a coach.42 His final major-league home run was a solo homer off Carl Hubbell on May 14, 1939. His last major-league RBI was a pinch-hit, walk-off single that gave Philadelphia a 9-8 victory over Chicago on June 6, 1939. The Phillies released him in December 1939. Whitney played for the Toledo Mud Hens and Tulsa Oilers in 1940, and then retired from professional baseball.

Whitney’s second child, daughter Audrie Suzanne, was born in 1941.43 After his wife left him, he raised his two children, and he married Harriet Sarah Sexton about 1947. On his honeymoon with Harriet, he ran into Babe Ruth in a hotel lobby in Dallas. Ruth “invited us up to his room to talk about the old days. … He was a grand, grand man,” said Whitney.44

Whitney owned a bowling alley in San Antonio in the 1940s, and he worked as a salesman for the Lone Star Brewing Company in the 1950s and 1960s.45 He was active in local baseball as a coach. Among the youngsters he mentored were future major leaguers Joel Horlen and Gary Bell.46 “I’ll do anything I can to help the kids in baseball,” said Whitney.47 He was especially proud of helping young ballplayers obtain college scholarships.48

In his old age, Whitney reminisced about his playing days in Philadelphia:

“Old Philly, lowly Philly, it had the worst water, best ice cream and most loyal fans in the game. They’d really fight for you. They’d ride the umpires and the visiting ball players. We’d get beat 14-0, 14-2 in a doubleheader, and they’d still be cheering for us.”49