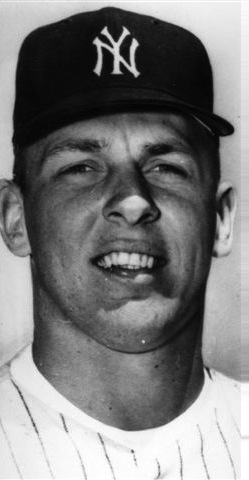 Roger Repoz’s most productive pro baseball seasons were in Japan, but his fondest pro baseball memories were “putting on the pinstripes and playing with all those great Yankee stars.”1 He hit 313 home runs with 1,002 RBIs in the major leagues, the minors, Japan, and Puerto Rico from 1960 through 1977. As a pitcher and first baseman for Western Washington University, Repoz was the Most Valuable Player in the National Association of Intercollegiate Athletics tournament in 1959. From 1967 to 1970, while with the Kansas City Athletics and the California Angels, he set a major-league record for nonpitchers of 347 games and 894 at-bats without hitting into a double play.2 The 6-foot-3 Repoz played at 195 pounds.

Roger Allen Repoz was born in Bellingham, Washington, a city 17 miles south of the U.S.-Canadian border and 50 miles southeast of Vancouver, British Columbia, on August 3, 1940. He was one of two children born to John and Joyce Repoz. John, of Yugoslavian descent, was a mill worker. Repoz’s only sibling was a sister, Linda. Roger enjoyed fishing, hunting, and playing Little League baseball during his childhood; his favorite players growing up were Mickey Mantle and Jackie Robinson. After graduating from Bellingham High School in 1958, he enrolled at Western Washington University in Bellingham. Playing first base and pitching for the WWU Vikings, who played in the regional Evergreen Conference, he had an 11-2 won-lost record with a 0.90 earned-run average in 1959. In the NAIA (National Association of Intercollegiate Athletics) national tournament in Alpine, Texas, the Vikings went 2-2, with Repoz winning both games and capturing the tournament’s MVP award.

Former major-league catcher Mickey Owen, scouting for the Chicago Cubs, was impressed by two players he saw in the tournament, Repoz and Lou Brock. “I wanted to sign both of them but (the Cubs) told me to recommend and sign one,” he told the author in an interview. “So we went with Brock, whose team (Southern University) won the championship.” Repoz drew attention from scouts again in 1960, and he was signed by Yankees scout Eddie Taylor after the Vikings’ 1960 season ended.3

At Columbus of the Southern League in 1964, Repoz hit a team-best 23 home runs and cut his strikeouts to 120. He earned a September call-up to the Yankees. Repoz told the author his first impression of Yankee Stadium was “like being in a canyon – the façade hung out over the field.” He made his major-league debut on September 11, as a pinch-hitter; Minnesota’s Jim Perry struck him out.

The next season Repoz played in 75 games for the Toledo Mud Hens and hit a team-leading 14 homers. He was hitting .287 with 38 RBIs and a .522 slugging percentage when the Yankees called him up at the end of June to replace an injured Roger Maris, and pick up the slack while Mickey Mantle, also injured, was limited to pinch-hitting duty. In his second game, on July 1, Repoz got his first major-league hit, a home run off the Orioles’ Steve Barber at Baltimore’s Memorial Stadium. He homered again the next day, off the Red Sox’ Dave Morehead in Boston. A third homer came off Joe Sparma in Detroit on July 5, then a fourth blast off Dave Boswell at Minnesota on July 9. On the 10th he was 4-for-5 against the Twins’ Mudcat Grant. Repoz ended 1965 with a .220 batting average and 12 homers.

The Yankees sent Repoz to Puerto Rico to play for the 1965-66 Ponce Lions, managed by former Yankee hurler Luis Arroyo. “It was a vacation – no pressure,” he said, and the quality of play “was much better” than Triple-A Toledo, with a lot of major leaguers and top prospects. In the playoffs, second-place Ponce toppled third-place Caguas in the semifinals before losing in the finals to the Mayag?ez Indians, featuring Detroit prospects.

In 1966, with Mantle and Maris both back in action, Repoz got limited playing time (37 games) with the Yankees but was hitting .349 when on June 10 he was traded along with pitchers Bill Stafford and Gil Blanco to the Kansas City Athletics for pitcher Fred Talbot and catcher Billy Bryan. “(Manager) Ralph Houk said they needed Fred. I wished it had never happened,” Repoz told the author. “I loved New York.” Repoz hit .216 for the A’s but led the club in homers with 11. Manager Alvin Dark played Repoz regularly against both lefties and righties.

Repoz returned to Ponce for winter ball and played in all 72 Ponce regular-season games, including a tie-breaker win over Santurce for the pennant. He played in the league all-star game, and was voted by the media to the final League All-Star Team.4

The 1967 season started splendidly for Repoz when he scored the winning run in the A’s 4-3 Opening Day win over Cleveland on April 11. He homered off Baltimore’s John Miller four days later and then slammed his second homer off Detroit’s Denny McLain on April 16. Manager Alvin Dark platooned Repoz more often; used him as a pinch-hitter; gave more playing time to Rick Monday and Jim Gosger; and kept Mike Hershberger in right field. Repoz told the author: “Dark was a good manager (but) a strange man.” Dark employed Allan Lewis, a designated pinch-runner, and would not hesitate to pinch-hit for a starting pitcher early in the game. Repoz was traded to California on June 15 for pitcher Jack Sanford and outfielder Jackie Warner. The Athletics had promoted Reggie Jackson, who was inserted into the lineup on June 9. Repoz opined to the author that his days in Kansas City were numbered after Jackson’s promotion, since the A’s would not carry that many left-handed-hitting outfielders – Rick Monday, Jim Gosger, Jackson, and himself. Repoz grounded into a double play in his final A’s at-bat, on June 6.

The Angels were a contender in July and August with good pitching, the slugging of Don Mincher, and the all-around play of team captain Jim Fregosi, who said to the author of Repoz, “What a great guy and a very talented hitter and player. (He) had great tools.” In his first game, on June 27, Repoz hit a fly ball to center off Washington’s Joe Coleman that began a major-league record streak of 347 games, 1,018 plate appearances, and 894 at-bats without grounding into a double play. He would not do so until May 24, 1970, a span of almost three seasons.5

Repoz’s first hit as an Angel was a homer off Boston’s Jim Lonborg on July 5. The Angels were in the fight for the pennant (won by the Red Sox), and Repoz wound up hitting .250 with 5 home runs and 20 RBIs for the Angels. After the season he put in his final campaign in Puerto Rico with Ponce.

Repoz had his worst season in 1969: .164, 8 homers, 19 RBIs. He lost playing time to Jay Johnstone. California’s 1970 edition was the best major-league team Repoz played on except for the 1964 Yankees. On May 19 he homered and doubled off Chicago’s Joel Horlen, and later doubled off Wilbur Wood, in a 3-0 road win. On the 24th at Minnesota he hit a two-run homer off Dave Boswell in the first inning. Then his remarkable streak ended in the seventh inning when his grounder to second baseman Rod Carew with a runner on first was turned into a 4-6-3 double play.

Repoz turned 30 on August 3, 1970, and played a final full major-league season with the 1971 Angels. The team finished in fourth place in the AL West. Repoz slumped to .199, with 13 home runs and 41 RBIs in 113 games. In 1972 he spent most of the early season with Salt Lake City and had only three at-bats with the Angels when he was traded in June to Baltimore for infielder Jerry DaVanon. The Orioles sent Repoz to Rochester; he hit .251 in 74 games but led the team with 13 home runs.6

Baltimore “had no plans for Roger” and asked him if “he was interested in going to Japan” in 1973. Repoz and Don Buford of the Orioles went to play for Taiheyo Club Lions of the Nippon Professional Baseball Pacific League. “It wasn’t easy,” Repoz told the author. “The deck is stacked and most (American) guys couldn’t take it. It’s their way or the highway.” Repoz’s first season in Japan was similar to his 1965 rookie season with the Yankees: 12 homers, .220 batting average, .312 on-base percentage, and .430 slugging average. Taiheyo finished fourth in the six-team league. Repoz made a lot more money (roughly $36,000 per season) playing in Japan from 1973 to 1977 than he did in the majors. He “was in the best shape ever” after preseason training, with a coach for running, fielding, hitting, and exercise. Repoz complimented his hosts: “They paid for everything; I had an apartment year-round; the lifestyle was good; they treated you like a star.”

After his first season with Taiheyo, Repoz’s contract was picked up by the Yakult Swallows of the Japanese Central League, and he played for the Swallows until 1977. Playing in Jingu Stadium, the Swallows’ home field, was “like playing sandlot ball in an all-sand infield,” he said. Repoz said he never drove a car in Japan, taking taxis exclusively.

The 1975 season was special for Repoz; he was the only Gaijin (foreigner) named to the Central League’s Best Nine team. That season Repoz hit .292 with 27 home runs and 70 RBIs. He followed this with another impressive one in 1976:.274, 36 homers, 81 RBIs. That year Repoz, teammate Charlie Manuel, and Clyde Wright of the Yomiuri Giants were involved in an altercation with members of the East German men’s Olympic hockey team at a Tokyo disco. Repoz said it was strictly verbal, denying reports that a fight took place.

In 1977 Repoz hit .263 with 22 home runs. He was released by the Swallows after the season, and moved to Fullerton, California, where he embarked on a 26-year career in carpet mill manufacturing. Repoz was inducted into the Western Washington University Hall of Fame in 1978, and considered it a “great honor to share it with (my) dad.” His sons, Craig and Jeff, played in the minors. Craig played in the Mets’ and Padres’ farm systems from 1985 to 1990, and Jeff played in the Phillies’ system in 1989-90. Repoz and his wife, Roberta, still lived in Fullerton as of 2013. Repoz attended a reunion of Yankees minor leaguers in 2010. He also played in three Angels Old-Timer games. Repoz maintains that his highlight in pro baseball was “putting on the pinstripes and playing with all those great [Yankee] stars.”

http://thisgreatgame.com/1965-baseball-history.html. 1965 The Fall of the Yankee Empire.

Phone conversations and e-mail correspondence with Ellis “Cot” Deal, 2011 and 2012.

1Roger Repoz written responses, June 2013. Repoz truly enjoyed his stint with the New York Yankees during the end of 1964, the second half of 1965, and the first two months of the 1966 season.“It was an honor to wear Yankee pinstripes,” he said.

5 The GIDP, although often monitored, did not become an official statistic until 1939, according to SABR’s Clem Comly.