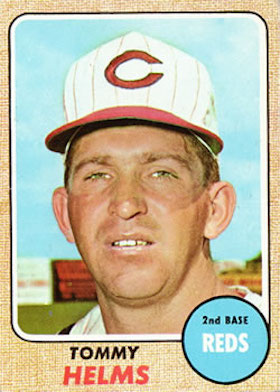 Baseball was in his blood. At a very early age Tommy Helms became involved in baseball, serving as a batboy for a semipro team managed by his father in Leaksville, North Carolina, at a time when mill-town baseball was the dominant form of entertainment in the textile region. The mill towns furnished far more than their share of major league baseball players. Whitey Lockman, Ken Wood, Pete Whisenant, and Helms all came out of the area near Leaksville in the years following World War II. Tommy played and managed in the major leagues, his two sons played in the minors, and a nephew also made “The Show.” Baseball was prominent in the lives of three generations of the Helms family.

Tommy Vann Helms was born in Charlotte, North Carolina, on May 5, 1941, the son of Laura Baker and Clyde D. Helms. He was introduced to baseball by his father in Leaksville, up near the Virginia state line. By the time Tommy reached high school the family was back in the Charlotte area. Tommy earned all-city honors in both baseball and basketball at West Mecklenburg High School. His play at shortstop attracted scouts from the Cubs, Indians, Senators, and Reds. He signed with Cincinnati a few days after his 18th birthday.

Helms started his professional career with the Palatka Redlegs, the Reds farm club in the Class D Florida State League. He spent two seasons in Florida, and then moved up a couple of steps on the ladder to the Topeka Reds in the Class B Three-I League. The next year he advanced to the Class A South Atlantic League’s Macon Peaches. Helms hit .340 for the Peaches and teamed with second baseman Pete Rose for a strong keystone combination. Both men leaped upward in 1963. Rose climbed all the way to the major leagues, while Helms made it to the Class AAA Pacific Coast League and the San Diego Padres. Helms spent 1963 with the Padres. According to baseball-refereence.com. he served in the U.S. Marine Corps, beginning in October, 1963.1 If this is correct, it must have been a short tour of duty. He played 142 games for San Diego in 1964 before being called up to the big leagues in September.

Tommy Helms made his major-league debut on September 23, 1964, at the age of 23. The right-handed, 5’10”, 165-pound shortstop made his first big league appearance against the Philadelphia Phillies. It wasn’t much of an appearance. He made it to the on-deck circle at Connie Mack Stadium and was announced as a pinch-hitter for Billy McCool, facing the starting (and ultimately losing) pitcher, lefthanded Dennis Bennett. However, he never made it to the plate. Phillies manager Gene Mauch sent righthander Ed Roebuck to pitch, so lefthander Marty Keough pinch-hit for the pinch-hitter. Keough himself was also part of a baseball family – his son Matt Keough was later a pitcher and scout for the Oakland Athletics. Marty grounded out, but the Reds, trailing 3-2, erupted that inning for four runs to win the game, 6-3.

On the last day of the season, October 4, in a game against the Phillies at Crosley Field, Helms was announced as a pinch-hitter for Joe Nuxhall. This time he actually made it to the plate. Jim Bunning struck him out.

Helms returned to San Diego for most of the 1965 season. He hit .319 in 96 games for the Padres, earning another shot at the majors. In 21 games with the Reds he hit .381. By 1966 he was ready to break into the starting lineup. Where would he play? Leo Cardenas had the shortstop position sewed up. Rose was the second baseman, but agreed to move to third in order to let Helms start the season at second base. “But Pete didn’t like third,” Helms said, “and after about two weeks we switched positions. It was unusual. I’d come up as a shortstop, then they moved me to second, and now I was playing third. I’d never played third base.”2

Helms quickly mastered his new position He was named the National League Rookie of the Year in 1966. However, he spent only one year at the hot corner. In 1967 Rose moved to the outfield, and Helms not only became the Reds second baseman, but he was selected as a second baseman for the 1967 and 1968 National League All-Star Games. He mastered the keystone sack, winning Gold Gloves at the position in 1970 and 1971. Starting in 1970, he led the National League in double plays by a second baseman three times in a row. He led the league in fielding percentage in 1970, 1971, and 1974. He led the league in putouts in 1971 and in assists in 1972. During his career he ranked among the top five in double plays eight times, in putouts six times, and in assists five times.

On June 30, 1970, the Cincinnati Reds moved into a new ball park – Riverfront Stadium. On the next day Helms hit the first home run by a Red in their new park, with a solo shot in the bottom of the 6th inning off of Atlanta Braves reliever Ron Reed, as the Reds shutout the Braves, 9-0.

Although he was not a prolific home run hitter (34 in his major-league career), over the years he homered off future Hall of Famers Jim Bunning, Steve Carlton, Ferguson Jenkins, and Phil Niekro. Helms was a major contributor when the Reds won the National League pennant in 1970. In the NCLS against the Pittsburgh Pirates, he collected three hits in 11 times at bat and fielded flawlessly. The Reds won the second NLCS ever played in three straight games and faced the Baltimore Orioles in the World Series. Helms managed four hits in 18 at bats as the Reds lost in five games. He never played in another post-season game.

On November 29, 1971, Helms was part of a blockbuster trade between the Reds and the Houston Astros. The Reds sent Helms, first baseman Lee May, and outfielder Jimmy Stewart to Houston for Ed Armbrister, Jack Billingham, Cesar Geronimo, Denis Menke, and Joe Morgan. Although Cincinnati fans were unhappy about losing the popular Helms and the slugging first sacker, the trade turned out to benefit the Reds. Helms had two good years in Houston, but his skills declined by 1975 and he lost his starting position. He never again played more than 64 games in a season.

On December 12, 1975, Helms was traded to the Pittsburgh Pirates for a player to be named later (Art Howe). With baseball’s best fielding second baseman, Bill Mazeroski in the lineup, the Pirates used Helms as a utility infielder in 1976, playing him more at third base than any other position. On November 5, Pittsburgh sold him to the Oakland Athletics, but he never played a game for Oakland. On March 15, 1977, the A’s traded him along with Chris Batton and Phil Garner back to Pittsburgh for Tony Armas, Doug Bair, Dave Giusti, Rick Langford, Doc Medich, and Mitchell Page. The Pirates soon gave up on Helms and released him on June 14, 1977. One week later he signed as a free agent with the Boston Red Sox. On October 1 he appeared in his last major-league game. Although the Sox had used him mainly as a designated hitter, he was the starting second baseman in this game, the only time he played the position all year. He went 1 for 3 as the Red Sox lost, 8-7, hitting a single off Mike Flanagan in the second inning. It was his last major-league hit. He was removed for a pinch-hitter, Bernie Carbo, in the ninth inning and his major-league career was over at the age of 36. The Red Sox released him during spring training on March 25, 1978.

In 1979 Helms was inducted into the Reds Hall of Fame. After retirement as a player, Helms and fellow North Carolinian Pete Whisenant operated a vending machine business in the Tar Heel State for a while.3 In 1981 and 1982 he coached for the Texas Rangers. In 1983 he returned to Cincinnati as a member of the Reds coaching staff. He served as infield instructor and first base coach. He took the reins as interim manager for a month in 1988 while manager Pete Rose was serving a suspension for shoving an umpire.

In August 1989 Rose accepted a plea agreement with Commissioner A. Bartlett Giamatti, which called for his lifetime ban from baseball for allegedly betting on games. On August 25 Helms was appointed interim manager and given a contract through the end of the season. He was told that he would be considered for the position in 1990.4

The Sporting News quoted several Reds players who supported Helms for the job.5 Todd Benzinger said, “They can save a lot of grief by hiring Tommy. He knows the personalities, and we all respect him. If he has done anything right, it was earning the respect of the players, and that’s half the battle.”6

Eric Davis chimed in: “Because the team was under adversity all year, Tommy never got a legitimate opportunity. He deserves a start from scratch. He had good rapport with all the players, and I was real impressed with the way he took control.”7

Paul O’Neill commented: “We all know there will be some changes, but I hope they give Tommy a chance. Tommy was thrown into the fire and expected to turn things around when they were too far gone.”8

Helms never got his chance. He was kept in suspense for six weeks until owner Marge Schott announced she would replace the manager. Helms was furious, saying she treated him like dirt. “I don’t want to be around Marge Schott no more. I’ve been kicked around enough, and I don’t want to be kicked. If the ball club is ever sold, I would like to come back as manager, but not while she’s here.”9

In 1990 Helms gained the position of manager of the Charlotte Knights, an affiliate of the Chicago Cubs in the Class AA Southern League. He resigned with 28 games remaining in the season. He told the Cubs he was leaving for personal reasons. The unraveling of his marriage may have been a factor, but it was not mentioned in the accounts of his resignation. Helms said the job in the minors had proven to be harder than he expected. He said he was especially weary of the long bus rides.10 He was replaced by Jay Loviglio on August 4.

The year 1990 was quite an eventful one for Tommy Helms. He got a minor league managing job and left it. His 18-year-old son Tommy Jr. broke into professional baseball as a second baseman for the Huntington Cubs in the Appalachian League. On October 17 he divorced Rita. On December 23 he married Cathy Ann Giannini in Charlotte.

During the 1990s Tommy Helms kept a low profile. The Sporting News carried no reports of his activities. However, other members of his family kept the Helms name in the sports pages. His son Tommy Jr. played in the minor leagues from 1990 through 1993. Another son, Ryan, played for White Sox farm clubs in 1994 and 1995. Tommy’s nephew, Wes Helms, was selected by the Atlanta Braves in the 1994 amateur draft, started his professional career that summer in the gulf League, advanced to the majors in 1998 and played in the National League for 13 seasons. Between Tommy, his sons, and his nephew, a member of the family had played in Organized Baseball every season from 1959 to 2011, a span of 53 years.

In 2000 and 2001 Tommy managed the Atlantic City Surf in the independent Atlantic League. In 2013 he was named to the North Carolina Sports Hall of Fame. As of 2015 he was living in Cincinnati, which had been his home for most of his adult life, except when his baseball activities took him elsewhere. At age 74 he was prepared for the inevitable, owning a burial plot in Rest Haven Memorial Park in Evendale, a suburb of Cincinnati.

Information about Helms’s family was accessed through www.ancestry.com. and www.beenverified.com.