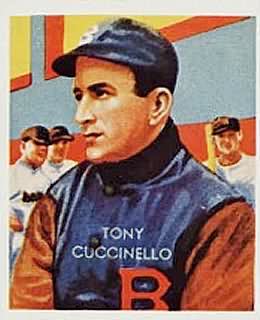 A diminutive Italian from Astoria, New York, on Long Island, who was introduced to baseball on the local sandlots, Tony Cuccinello was involved in what remains the closest batting race in major league history, when, as a member of the Chicago White Sox, he lost the 1945 American League batting title to George “Snuffy” Stirnweiss of the Yankees by a margin of .000087.

Cuccinello had a fast start in 1945, keeping his average in the .380–.390 range for the first month. The heat of the Chicago summer eventually wore Tony down, however, and at what was then the advanced age (for a ballplayer) of 37, Cuccinello did not play every day, and in fact had to play more in September to achieve sufficient at-bats to qualify for the batting title. Stirnweiss edged out Cuccinello on the final day of the season, when a White Sox doubleheader was rained out and Stirnweiss went 3-for-5 against the Boston Red Sox. One of those hits, however, was scored an error initially, and then changed to a hit by the official scorer, who just happened to be a writer for the Bronx Home News. According to Cuccinello, he was told at the time that the official scorer only changed the call after he was informed that the White Sox had been rained out and Cuccinello’s season was over. Ironically, Cuccinello later coached Stirnweiss with the Cleveland Indians, and Snuffy confirmed the shenanigans when he told Cuccinello: “He (the writer) gave it to me.”

Anthony Francis (“Tony” or “Cootch”) Cuccinello was born November 8, 1907, in Long Island City, New York. Tony played in a semipro league in New York City and eventually signed a contract to play for the Syracuse Stars of the International League in 1926, while still a teenager. After two months Cuccinello was sent to the Class B Lawrence (Massachusetts) Merry Macks, where he spent the rest of 1926 and 1927, when he hit .310. In 1928 he was assigned to the Danville Veterans of the Three I League. After another season hitting .310, Cuccinello caught the attention of Branch Rickey, who saw him play and bought him for the Columbus Senators in the American Association. Cuccinello’s performance at Columbus (.358 batting average with 20 home runs and 111 runs batted in, and a league-leading 227 hits and 56 doubles) earned him a quick promotion to the major leagues, when the Reds purchased his contract after the 1929 season. Tony made his debut on Opening Day, April 15, 1930, playing third base in a losing effort against the Pittsburgh Pirates.

Cuccinello had a solid rookie season, batting .312 with 10 home runs and 78 RBIs. In 1931 the Reds shifted Tony to second base and he responded with a .315 average and 93 RBIs, a club record for second basemen until broken by Joe Morgan in 1975. In his best offensive performance that year he got hits in six consecutive at-bats, including two doubles and a triple. He led the league’s second basemen in putouts, assists, errors, and double plays.

Despite Cuccinello’s performances on the field, he refused to sign the contract the Reds tendered to him and found himself shipped to the Brooklyn Dodgers to begin the 1932 season. Tony played in all 154 games that year, turning in respectable offensive numbers for a second baseman (.281, 12 homers, 32 doubles, and 77 RBIs) but, more importantly, becoming a teammate of future Hall of Fame manager Al Lopez, with whom he would begin a lifelong friendship. That same year Cuccinello married Clara Caroselli (after the season, on October 29), and they produced three children: Anthony Jr. in 1936, Darlene Ann in 1938, and Alan Joseph on their 13th wedding anniversary in 1945. Cuccinello’s performance in ’32 earned him a spot on the roster of first All-Star Game in 1933 (the so-called “Game of the Century”), where he had the dubious distinction of pinch-hitting for Carl Hubbell in the top of the ninth and striking out to end the game.

In 1935, Cuccinello’s younger brother, Al, made his major league debut and played in 54 games with the New York Giants, the only major league experience Al would have. The brothers played against each other several times that year and both homered in the same game on July 5. Tony’s homer was a solo shot in the top of the eighth and Al’s a two-run blast in the bottom of the ninth inning of a game Brooklyn won 14–4. After four years with the Dodgers, Cuccinello was on the move again when Brooklyn traded him to the Boston Braves. In Boston in 1936, Cuccinello had one of his best offensive seasons, batting .308 and driving in 86 runs. Tony’s excellent defensive performances continued in Boston, as well, and he teamed with a player he later described as the finest of the shortstops he played with in his career, Eddie Miller.

In 1939 Cuccinello suffered a knee injury after Dick Bartell of the Chicago Cubs slid into him at second base, and surgery sidelined him for two months. His first game back after the surgery Cuccinello had 10 assists in a 22-inning game while playing second base. The knee never really improved despite the surgery, and Cuccinello was traded to the Giants midway through the 1940 season. At the end of that season Cuccinello retired for the first time, so that he could manage the Jersey City Giants in the International League. Jersey City finished fifth in the eight-team league in 1941, and Cuccinello was prepared to manage again in 1942, but instead was called by his former Brooklyn manager Casey Stengel, then with the Braves, who asked Cuccinello to join his staff as a player-coach. In 1942 Cuccinello threw batting practice, coached third base, and pinch-hit for Stengel, and in mid-season 1943 was released so that he could sign with the Chicago White Sox, a team desperately in need of players to replace those who enlisted in the military. Cuccinello, who suffered from chronic laryngitis, was not drafted into military service, and therefore was able to continue his career.

From mid-1943 through the 1944 season Cuccinello was a reserve infielder who appeared in fewer than 50 games each year, and he later said that but for the war he likely would have retired before the 1945 season. But in 1945 Cuccinello went to a northern spring training in French Lick, Indiana (later made famous by native son Larry Bird), where he had a mineral bath every day, followed by a rubdown and a nap, and entered the season feeling the best he had ever felt. Perhaps it was the mineral baths or the naps, but nevertheless after the Indiana spring training Cuccinello embarked on his near-title-winning year, and retired from playing for good at the end of that campaign.

Cuccinello was out of baseball in 1946, but managed the Tampa Smokers in the Florida International League to 104 wins and a second-place finish in 1947. The following year he reunited with Al Lopez in Indianapolis, where they coached the Indianapolis Indians of the American Association to a 100-win season and a online ranking among the 100 best minor league teams of the 20th century. In 1949 Cuccinello began a three-year stint as a coach with his first major league team, the Reds, and in 1952 he joined Al Lopez’s coaching staff on the Cleveland Indians, the first of several such positions he would hold. Coincidentally, 1952 was also the last year of former nemesis Snuffy Stirnweiss’s career, also with the Indians.

Cuccinello’s first postseason experience came as a coach with the Indians in the 1954 World Series, which the heavily favored Indians lost to the New York Giants. In 1957, Cuccinello followed Lopez to the Chicago White Sox, and in 1959, as third base coach, was involved in a controversial play that some said at the time led to the White Sox’ demise at the hands of the Los Angeles Dodgers in the 1959 World Series. In Game 2 of the Series, Sherm Lollar, the White Sox catcher, was on first base in the bottom of the eighth with nobody out, a man on second, and the score 4–2 in favor of the Dodgers. The next batter, Al Smith, doubled to left-center. The runner at second (Earl Torgeson, running for Ted Kluszewski) scored easily. Cuccinello waved Lollar home, where he was thrown out—by a good margin, by all accounts. When the Sox went on to lose the Series four games to two, Cuccinello immediately was awarded goat horns and tagged with the blame for the Series loss.

Lopez defended his friend and fellow coach, telling a Chicago Daily News reporter first, that in his opinion the play itself was fine, and more importantly, that the play was not the turning point of the Series, that the Sox’ inability to run in the Coliseum was what led to their demise.

Lopez repeated that opinion in an interview with The Sporting News, noting that it took a perfect play by the Dodgers’ defense to nail Lollar at the plate. One of the Dodgers involved in the play, outfielder Wally Moon, expressed the same opinion during the off-season after the World Series when he said that he also might have sent Lollar if he were in Cuccinello’s shoes, because the odds were against the Dodgers making the play.

In any event, Cuccinello survived the controversy and continued coaching in Chicago into Eddie Stanky’s managerial tenure, which started in 1966. In 1967 Cuccinello joined the staff of new Tigers manager Mayo Smith, and at the beginning of the season Cuccinello took on Dick McAuliffe as a private project, to help McAuliffe make the switch from shortstop to second base. At the time Cuccinello said McAuliffe had to work on slowing himself down, and in 1968 the work seemed to bear fruit, as McAuliffe’s defensive improvement was cited by both opposing manager Alvin Dark of the Cleveland Indians and Tigers coach Hal Naragon as a key factor in the Tigers’ success. Cuccinello enjoyed his first and only World Series championship in 1968 when the Tigers defeated the St. Louis Cardinals in seven games

Cuccinello left the Tigers in 1969 to reunite with Al Lopez, who managed the White Sox for 17 games that season. Cuccinello then retired to Tampa, Florida, where he worked as a Yankees scout in the area until retiring from baseball completely in 1985. Cuccinello passed away of congestive heart failure September 21, 1995, at a hospital in Tampa.

An updated version of this biography is included in the book “Pitching to the Pennant: The 1954 Cleveland Indians” (University of Nebraska Press, 2014), edited by Joseph Wancho. It first appeared in “Sock It To ‘Em Tigers–The Incredible Story of the 1968 Tigers” (Maple Street Press, 2008), edited by Mark Pattison and David Raglin, and later in “Go-Go To Glory—The 1959 Chicago White Sox” (Acta, 2009), edited by Don Zminda.

The Sporting News, October 21, 1959, p. 12. The play was also included in a summary of the worst coaching blunders in The Baseball Hall of Shame, written by Bruce Nash and Allan Zullo and published in 1985 by Pocket Books, New York.