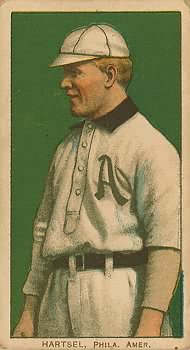 Standing just 5’5″ and a stocky 169 pounds, Topsy Hartsel used his small size to become the most effective leadoff batter of the Deadball Era. During his 10 seasons with the Athletics, Hartsel led the American League in walks five times, on base percentage twice, and runs scored once. His 121 free passes in 1905 remained the American League record until Babe Ruth shattered it in 1920. Batting at the top of Connie Mack‘s order and playing a solid left field, he set the table for some of the era’s best teams as his Philadelphia Athletics won four pennants during his ten year tenure with the club. The Sporting News said on reporting his death in 1944, “Though never an outstanding batsman, Hartsel, who was only five feet five inches tall, was one of the game’s greatest leadoff men. He was a lefthanded hitter, very fast, with an uncanny eye at the bat. And once he got on base he was a difficult man to stop.”

Tully Frederick Hartsel was born on June 26, 1874 in Polk, Ashland County, in north central Ohio. He was the fifth of twelve children (ten surviving) born to Henry Hartsel, a laborer, and his wife Harriet Switzer Hartsel. When he was 12 years old, his family moved to Wellington, Ohio. It was there that he went to school and got his start in athletic competition. He was good enough to make his high school’s varsity football and baseball teams while still in the eighth grade. He was a halfback and middle infielder and played both sports for five years. After graduating, he had an opportunity to play college football, but opted for baseball instead. In 1895 he played semi-professional baseball in New London, Ohio and in 1896 continued as an infielder for several northwestern Ohio teams.

Hartsel made his professional debut in 1897 with Burlington (Iowa) of the Western Association. He was moved to the outfield because of his left-handedness and also played with the independent Lima, Ohio club that same season. The following year he started with Montgomery (Alabama) of the Southern League. When that league folded he went to Salem in the Ohio State League. That circuit folded as well and he made his way to Grand Rapids of the Inter-State League and was sold late in the season to the Louisville Colonels of the National League. He continued with Louisville to begin the 1899 season but was sold Indianapolis of the Western League on June 25. Hartsel was still with the club when the league changed its name to the American League in 1900.

It was at Indianapolis that Tully Frederick Hartsel acquired the nickname Topsy. Hal Reid, an Indianapolis sportswriter, noted the young Hartsel’s white hair, eyebrows and lashes, pink complexion and light blue eyes and remarked, “Say, boy, you’re as light as Topsy of Uncle Tom’s Cabin is black.” He was known as Topsy for the rest of his life, and still is to this day. One observer later remarked that Hartsel was “generally known by the fans when he steps to the plate by his shock of white hair.”

In 1900, a squabble over Hartsel’s services broke out between the Cincinnati Reds and Chicago Orphans of the National League, both of whom claimed to have acquired his contract from Indianapolis. Joining Cincinnati in mid-September 1900 with the dispute still raging, Hartsel batted .318 in 18 games for the lowly Reds. After the season, Chicago president James Hart tried to have all Reds games in which Hartsel played forfeited. This effort was unsuccessful, but Hart did succeed in having Hartsel’s contract assigned to the Orphans for 1901.

The 1901 season was Topsy Hartsel’s breakout year. Playing the outfield, primarily in left, the little left-hander hit a solid .335 and was among the league leaders in almost all offensive categories. He placed second with 74 bases on balls and 41 stolen bases, and ranked in the top seven in the league in games, at bats, runs, hits, total bases, triples, home runs, on base percentage and slugging. Two of his seven home runs came on the same day at Cincinnati and both were of the inside-the-park variety. Having made his mark, he was induced by Connie Mack to jump to his American League Philadelphia Athletics for the 1902 season.

Mack immediately installed Hartsel at the top of his batting order and in left field. Hartsel did his job, leading all league batsmen in bases on balls (87), stolen bases (47) and runs scored (109, tied) as the A’s led the majors in scoring and won Mack’s first pennant. Hartsel and the A’s played solid, winning baseball the next two seasons and Topsy established himself as the best leadoff hitter in the game. In 1903, Hartsel batted .311 with five home runs as injuries limited him to 98 games. The following year, Hartsel remained healthy but saw his average slip to .253, though he remained an effective leadoff hitter thanks to his ability to draw walks, as his 75 free passes ranked third in the league.

The A’s returned to the top of the American League in 1905. Now 31 years old, Hartsel was on top of his game, too. He led the league in on base percentage (.409) and bases on balls (121) while swiping 37 bases. The A’s again led the league in scoring and won the pennant narrowly over Chicago. In a pivotal September series with the White Sox Hartsel was involved in a very rare play. Until 1954 players left their gloves on the field when they came in to bat. Seldom did these ever come into play, but such was not the case for a game in Philadelphia on September 28, 1905. Hartsel scored from second base on a single to left by Harry Davis when the batted ball struck Hartsel’s own glove, providing just enough delay for Hartsel to score the winning run on a very close play at the plate. The A’s went on to finish just two games ahead of the Sox. In that year’s World Series against the New York Giants, Topsy tied for the team lead with four hits and had two walks, a pair of steals and scored a run–one third of the A’s series total (all three runs were unearned) as they were shut down by Christy Mathewson and Joe McGinnity.

Hartsel continued to work his magic from the leadoff spot, as the A’s finished a close second to the Tigers twice over the next four years. Though his batting average never again topped .300, he continued to lead the league in walks every year through 1908, and his .405 on base percentage topped the league in 1907. By 1909, however, the 35-year-old Hartsel was no longer playing every day. Still, he was effective as a part-time player and had a lot to do with the A’s successes in 1910 and 1911 as he was greatly relied upon by Connie Mack to assist in coaching duties. Hartsel appeared in just one World Series game in 1910 but was on the coaching lines in 1911. He had been involved in several sign stealing schemes and was credited with stealing the Giants’ signals during that Series. Long regarded by Mack as a smart player and a student of the game, Hartsel, along with fellow A’s player/coach Harry Davis, developed the pre-game scouting report and was instrumental in directing the A’s play.

Topsy Hartsel was purchased by Toledo of the American Association in December of 1911 with the hope that he would play regularly for the Mud Hens for four or five seasons. That did not come to pass. Cleveland and Toledo owner Charles Somers announced in January that Hartsel would manage Toledo for the coming season. In his first season at a helm, Hartsel led the Mud Hens to a solid second place in the American Association. The following season he was not as effective. At the end of July, his Mud Hens were in seventh place with a record of 48-59. He had played little himself, hitting .303 in just 12 games. Somers became dissatisfied with Hartsel’s lack of success and Topsy resigned on August 3.

To discourage the Federal League from placing a team in Cleveland, Somers moved his Toledo team there beginning in 1914 so that he would always have a game in town. Filling the void in Toledo was an entry in the Class C Southern Michigan Association, where Hartsel reappeared as part time player and manager. Now 38, he hit .325 and played flawless outfield. The Soumichers, as they were sometimes called, finished third in the ten-team circuit in the first half pennant race, but dead last in the second half. They were not supported by the Toledo fans, and did not return for another season.

Topsy Hartsel (who usually went by the name Fred in private life) had married Angie Mae Goodwin on October 13, 1903, and the childless couple spent the post baseball portion of their lives in Toledo. After his professional baseball days were finally over, Hartsel stayed in Toledo and tried his hand as a machinist, and, for a short time, entered into business. He and another ex-Mud Hen, Harry S. Hinchman, opened a downtown Toledo business that dealt in “automatic baseball.” Then he went to work as a cashier for the Community Traction Company in 1918. He continued with the public transportation company as a transfer clerk until he retired in 1941. He stayed away from baseball until 1929 when he took over the Community Traction team and managed it. He then became a strong supporter of amateur baseball in Toledo, managed several junior teams and was a member of the Toledo Old Timers’ Baseball Association. Hartsel never lost his interest in the game and followed the 1944 World Series from his deathbed. He died on October 14, 1944 after being ill for several months and is buried in Historic Woodlawn Cemetery in Toledo.