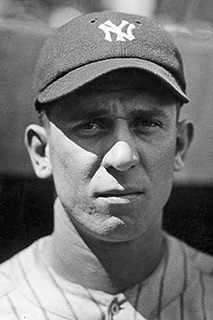 The best curve ball that Babe Ruth ever saw came not from Walter Johnson, Dazzy Vance, or Firpo Marberry. It was from Walter Beall, a DC sandlot baseball legend who was a teammate and hunting buddy of Ruth’s — the pair used a West Virginia cabin owned by Beall’s paternal grandfather.1 “His curve broke down, and I’ll swear he could break it three or four inches,” wrote the Sultan of Swat in Babe Ruth’s Own Book of Baseball.2

Beall pitched one inning for the 1927 New York Yankees, regarded by many metrics — mathematical and anecdotal alike — as the greatest baseball team ever. But his Achilles heel was control. Or lack of it. The problem plagued him throughout his career.

Born in Washington, D.C., to Benjamin — a Navy Yard machinist — and Lillie Beall on July 29, 1899, the future pitcher was christened Walter Esau.3 At 14, Beall played for the Friends School — a 1914 box score has him playing left field4 — then ascended the following year to the pros. But the 15-year-old phenom got kicked off the Frederick Hustlers in the Blue Ridge League once the manager discovered his age. Beall also pitched in the amateur ranks in 1915 for the Rosedale club in the Washington-area Rosedale League postseason5 after playing for the Crescent team in Baltimore.6 On July 9, he set an amateur strikeout record — 21 in eight innings against Eastern Rotary.7

In 1916, Beall was with the Mohawk club, an independent amateur team.8 He played for the Mohawk and Rex clubs in 19179 and went professional the following year for the Martinsburg Mountaineers in the Class-D Blue Ridge League, where he compiled an 0-4 record and led the league in walks but struck out 27 in 39 innings. The BRL lasted three weeks.10

Beall registered for military service at the tail end of World War I, assigned as a supply clerk in the War Risk Insurance division,11 which had a team in the District Baseball Association along with other government nines.12 Naval Operations beat Beall and his cohorts, 8-1, in the third and deciding game for the DBA championship.13

In 1919, Beall pitched for the sandlot team Southern Railway14 and Zone Finance in the Government League.15 He also made two appearances for Portsmouth in the Virginia League, resulting in an 0-1 record.16 Beall stayed in the Old Dominion State in 1920 — he went 6-7 for the Norfolk Mary Janes in the Virginia League with a 3.20 ERA in 15 games and 118 innings pitched..

In 1921, Beall’s reputation grew in the DC-area amateur circuit as he played for the Quentin Athletic club,17 Bearcats,18 and Quincy.19 He racked up two no-hitters and a 23-strikeout game.20 His 1922 endeavors consisted of pitching for Mohawk21 and returning to Martinsburg, where he played in two games for an 0-1 record.22

Beall’s fortunes changed when he played for Greenville in the East Carolina Baseball League, an “outlaw” enterprise that was neither associated with nor recognized by Major League Baseball; Gene Stallings, the manager of the Double-A Rochester Tribe in the International League, spotted his talent and forked over $2,000 to Greenville for Beall’s “reinstatement” in professional ranks.23

Beall’s promise was tempered. Still maturing as a pitcher, he was described as “a youngster of marked natural ability, but he has turned in some erratic performances, chiefly because of lack of knowledge of the way to obtain results from his ‘stuff.’”25

An exemplary performance occurred on June 30 — a two-hitter in the first game of doubleheader against the Buffalo Bisons. Beall got more than enough run support in the 8-0 victory.26 Beall went 15-9 in 1923 — including a game where he pitched all 14 innings in a win against Newark27 — and ended the season with a 2.81 ERA,28 the second lowest in the International League.29

In June 1924, Beall struck out 16 batters in the first game of a doubleheader against the Bears; Rochester won 5-2 and lost the second game 3-1.30 The Yankees purchased Beall’s contract in August, reportedly for $50,000,31 though an article three weeks later in Binghamton’s Press and Sun-Bulletin claimed the cost was uncertain.32 Beall finished his 1924 tenure in Rochester with a 25-8 record.33

His maiden major-league voyage yielded four games, a 2-0 record, 18 innings pitched, 18 strikeouts, and a 3.52 ERA. “Yes. Beall has a fine curve ball and he is just wild enough to be effective,” said Yankees skipper Miller Huggins. “You don’t see many batters taking toe holds against his style of pitching.”34

Huggins used Beall primarily as a reliever in 1925 — eight appearances, 12.71 ERA, 111/3 innings pitched — before sending him to the St. Paul Saints in the American Association on July 3 while fellow hurler Elmer Duggan, who was also under option, got his walking papers to Hartford. Whitey Witt was “released unconditionally.”35 The highlight of Beall’s St. Paul tenure was a one-hitter against the Triple-A Milwaukee Brewers, missing the milestone of blanking 27 consecutive batters when pitcher Johnny Stuart knocked a single.36 Beall went 7-8 for the Saints, then returned to the Yankees in 1926 — started nine games; appeared in 20; compiled a 2-4 record; and brought his ERA down to 3.53.

Beall’s one inning for the lauded Yankees of 1927 took place in the first game of a doubleheader against Philadelphia on May 30. He relieved Joe Giard, in the bottom of the eighth and got the legendary Ty Cobb out on an F-7 fly. Then, Al Simmons doubled, stole third, and scored on Jimmy Dykes’s sacrifice fly. Mickey Cochrane grounded out.

Two weeks later, Beall got released back to St. Paul “under an optional agreement.”37 In his return, Beall walked 10 and struck out 10 in a complete-game, 2-2 tie.38 The second St. Paul tenure lasted seven weeks, ending with a 2-2 record, nine appearances, and 4.68 ERA. On July 29, a hint of his exodus appeared in the Star;39 he was gone a little more than a week later to the Toronto Maple Leafs in exchange for Joe Maley, a minor-league pitcher from 1924-1931 who was 5-14 before the trade.40 The Toronto press described Beall as “brilliant but erratic”41 and “[having] a world of stuff but on his record he does not know what to do with it.”42

You didn’t need to be Nostradamus to predict what happened next.

Beall’s pitching against the Reading Keystones resulted in the headline “Beall At Old Tricks Wilder’N Two Hawks.” The 6-5 loss was Beall’s only start for Toronto,43 which, too, had “an optional agreement”44 that was exercised. He went to the Hartford Senators in mid-August with great expectations.45 Beall’s record in Hartford was 3-6 in 12 games.

Returning to Canada for part of 1928, Beall pitched himself to a 1-5 record and 3.73 ERA in 10 games for the Montreal Royals, which released Beall to the Chattanooga Lookouts of the Southern Association in early July.46 It was classified as a loan from the Yankees, who “refused time and again to sell him.”47 Beall’s reputation preceded him, inducing the Chattanooga Daily Times to report on the wildness.48 It manifested twice in a complete-game, 8-3 victory against the Mobile Bears.49 Wildness caused a loss against the Memphis Chicks in his next opportunity.50

Beall’s last appearance for Chattanooga appears to be on August 17, when he was replaced after the Birmingham Barons knocked him for four runs; the Lookouts lost 9-5.51 He began 1929 with the semipro St. Mary’s Celtics from Alexandria, Virginia and struck out 11 in a 4-3 victory against Wilkes-Barre in the New York-Pennsylvania League.52 But he went back to the pros for his hometown Washington Nationals at the end of May.53 Once again, the imbalance between Beall’s talent and control was described by local press.54

The Nationals released Beall at the end of June for space reasons.55 He went back to semipro ball and played with the Bloomingdale Club.56 In late April, 1930, he joined the Bugle Club57 and returned to professional ranks with the 1931 Norfolk Tars in the Eastern League. It was a brief stint — three games, 0-1 record. Beall was reported as being “far overweight and far from being in condition” with the Tars.58 Norfolk released him in late May.59

Less than a week later, Beall journeyed to the Keystone State to take a job with the semipro Penn Central Light and Power Company Lightmen in Altoona and made his first appearance on May 26. Beall pitched in 15 games; his record was 7-7 and summarized as “wildness in streaks.”60

In 1932, Beall went to the Shreveport Sports, managed by George Sisler, in the Texas League. Wildness reared in his first official game for Shreveport. Though he allowed five hits, his control issues let three runs score in an exhibition game against the bearded House of David squad. The Sports won 8-4; Beall lasted seven innings and had “a nice curve ball.”61

He pitched at least one game for the Knoxville Smokies in May, giving up four hits and a walk in the first inning against the Nashville Volunteers, which won 15-6.62 Beall went to the Youngstown Buckeyes in the Central League in mid-May63 and pitched in a handful of games.64 A 5-4 loss against the Erie Sailors was apparently his last professional game;65 Youngstown released Beall along with Eddie Boland in mid-July.66

His passion for baseball continued in the semiprofessional rosters, where he played for different teams, sometimes in the same years. In 1933, Beall pitched for the Bloomingdale Club based in Baltimore’s West End in the city’s Semi-Pro League.67 In 1934, Beall not only hurled for Bloomingdale68 again, but for Culpeper in the Valley League69 and the semipro champion Cloverland Farms Dairy Team,70 showing his old form where he struck out 10 in one game.71

He headed to Virginia to play for Culpeper again in 1935,72 where he notched a 7-1 record.73 Beall also pitched for the Resettlement Greenbelts in the Industrial League74 in 1936, as well as the Green Belt of Berwyn.75

Beall’s personal life was fraught with tragedy. His wife Alma (née Mitchell) died at the age of 38 in 1939 from an ectopic pregnancy.77 She had two additional miscarriages and delivered three children — Alma Lorraine, Deanna Joan, and Walter, Jr., who died at nearly 18 months old on August 31, 1933 after his tricycle overturned and the handlebar “pierced his mouth.” Although the wound was treated and not believed to be a serious injury, it got infected.78

Given Beall’s gregarious nature, it’s logical that he paired with Babe Ruth but conflicted somewhat with his travel roommate, the rather taciturn Lou Gehrig.79 Walter and Alma would often go dancing with the Babe and his wife in Washington and Baltimore. One of Beall’s hidden talents was playing the piano by ear.80

This biography was reviewed by Bill Nowlin and David Lippman and fact-checked by Kevin Larkin.

5 “Baltimore Is Anxious to Get in the Intercity Baseball Series, But Local Authorities Are Not Sure Requirements Can Be Met,” Washington Post, July 18, 1915: SP4.

12 Bryan Morse, “Fans Favor Operators To Land Title Series,” Washington Times, September 26, 1918: 14. The other teams in the DBA were along with Naval Operations, Navy Yard, Quantico Marines, Cappub, Clarendon, Rex A.C., and Army Medicos. The Times article described, “Walter Beall is a strong youngster who is a clouter as well as a pitcher.”

33 “Beall Says Adieu With Twenty-Fifth Win For Tribe,” Democrat and Chronicle, August 31, 1924: 32. Beall’s 25th victory came after he agreed to go to the Yankees. He won his 25th game against the Bears in the first half of a doubleheader.

36 Charles Johnson, “Kelley To Gamble On Draft, Refuses To ‘Cover Up:’ Any One of Half Dozen Millers May Be Lost in ‘Lottery’ — George Fisher Becomes Leading Hitter of Club as Others Fall Into Slumps,” Minneapolis Star, September 15, 1925: 8.

45 “Calling ’Em Right,” Hartford Courant, August 19, 1927: 17. The article praised Beall but also warned of the control issue. “In fact, Beall is said to throw up a ball which does not curve — just explodes as it reaches the batter.”

64 The Youngstown Vindicator and other Ohio newspapers consulted by the author do not have box scores, so it’s difficult to discern the credits for wins and losses.