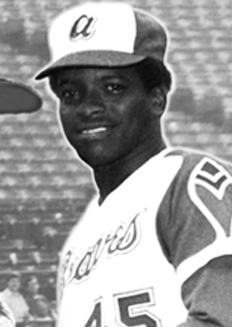 One might expect to find “Sir” before the ever-so-posh name of Percival Edmund Wentworth Ford. If not knighthood, then perhaps an OBE would be in order. The reality was humbler, though — Wenty Ford was a soft-tossing little pitcher from the Bahamas who took the mound for just four games in the majors in 1973. Two years later, he was out of pro ball; five years after that, his life was cut short in an auto accident. Yet 30 years further on, this amiable man is still fondly remembered at home — and in America too, by people like his Atlanta Braves teammate, the great Hank Aaron.

Ford was the fourth of six Bahamians in big-league history (there was a gap from May 1983 to September 2011). He was born on November 25, 1946 in Nassau. Wenty’s father, Percival Edmund Wentworth Ford, Sr., was a printer for the Nassau Guardian newspaper. He and his wife Florence Coleby Ford, who was a homemaker, had eight boys and three girls (though one of the daughters died when she was very small). Wenty was their first child.

“Wenty was an all-around sportsman,” says his wife, Evangeline “Vangy” Williams Ford. “He represented the Bahamas in cricket in London, Bermuda and the Caribbean. He also managed the Kentucky Colonels basketball team here in Nassau. He played tennis, volleyball, and golf.”

Given the long British influence in the Bahamas, cricket was the traditional sport there, but baseball took off in the mid- to late 1950s thanks to the first two Bahamian major-leaguers, André Rodgers and Tony Curry. Young Wenty knew them as well as future Cincinnati Red Ed Armbrister, who was born about a year and half after him. Although he played cricket and basketball as a youth, he enjoyed baseball too.

In the early ’60s, Ford played both baseball and cricket at places such as Southern Prep Park (now Columbus Primary School) and Windsor Park (which was near the family’s home). Joining him were comrades with colorful Caribbean names like Louford “Dog” Turner and Hugh “Meatman” Bethel.1 Bethel, who played in the Florida Rookie League in 1965, was also part of the wellspring of Bahamian players who made it to U.S. pro ball that decade. The other men who came closest to the majors were Vince Ferguson and Edmundo Moxey, but Wenty’s younger brother Eddie Ford played in the low minors for the Astros in 1967-68.

Ford attended two high schools in Nassau, St. Augustine’s and St. John’s. After he graduated, he continued as a baseball pitcher and cricket bowler at home and elsewhere. For example, in 1965 he played baseball in a place rarely associated with the game: Jamaica. The visiting Bahamian team was a combination of cricketers and volleyballers. The Daily Gleaner observed that “Ford’s pitching left the losers wondering at his sharp in and out curves.”2 Wenty and Eddie would return for a series in September 19673 and another set in September 1969.4

Although the Bahamas sent teams to the National Baseball Congress (NBC) tournaments in 1964 and 1965, Wenty was not on those squads. In February 1966, the Atlanta Braves signed him. The scout of record is John Mullen, who was then the Braves’ farm director. Nassau neighbor Vince Ferguson, who was about to jump to the chain’s Triple-A farm club in Richmond, recommended Ford. “Mr. Mullen invited me to a camp in Waycross, Georgia,” Wenty remembered in 1967. “After I had been there about three weeks, they saw how bad I wanted to play ball. I’d been dreaming about it ever since I was 10 years old.”5

Ford’s first assignment was to Sarasota in the Gulf Coast rookie league. He started just four times in 13 appearances but tied for the league lead in wins with six, against just two losses. His ERA was a sharp 2.08.

The Braves promoted Wenty to Class A for 1967, and he pitched very well again. He won 12 and lost 10 for a West Palm Beach team that was 51-81. He put up another fine ERA of 2.49. The clear highlight came on June 1. In front of just 194 fans at home, Ford threw a perfect game against the Fort Lauderdale Yankees, a team that included future big-leaguers Tony Solaita and Johnny Ellis. He “displayed a sharp-breaking curve, a good slider and an effective change as he fanned eight Yankees. He threw only 84 pitches and no batter got as much as a ball three count.”6 He even drove in the game’s only run with an infield out.

Although he was an effective pitcher, it took nearly all of the next six seasons (1968-73) before Ford finally got his cup of coffee in the majors. The Atlanta brass didn’t rate him highly because he didn’t “pop the mitt” — in his own words, he had three speeds: “slow, slower, and stop.”7 He was used out of the bullpen and as a swingman, seldom as a regular starter. Wenty’s only bad year came at Shreveport in the Texas League in 1970, but he found a backer in manager Clint “Scrap Iron” Courtney. “They wanted to release him,” said Courtney. “I just said, ‘send him to me.’”8

Wenty never played winter ball. After the baseball season ended, he would play basketball and cricket back at home. In September 1970, for example, a Jamaican cricket club called the St. George’s Old Boys came to Nassau. “In the feature match played at Windsor Park, a large crowd of over 2,000 spectators saw their paceman Wenty Ford wreck the Jamaican batting, bagging six for 22.”9

Ford returned to form as a reliever at Savannah in 1971. Clint Courtney became manager there in 1972; once more Wenty posted an ERA below 3.00 coming out of the pen. It was little surprise that when Courtney took over as skipper at Triple-A Richmond in June 1973, Ford went up with him. The difference was that he had become a starter again — and he was pitching better than he ever had.

“He seems to throw junk, but it’s obviously good junk,” said one story from August 1973 that also called him “mysteriously successful.” There were a lot of clear keys, though: Wenty changed speeds, worked fast, and had good control. “He knows how to pitch,” said Bobby Cox, then managing the Syracuse Chiefs.10 Courtney said the same thing, also noting, “He’s even better now because he’s smarter. He has batters in this league cussing at themselves. And you won’t find a better fielding pitcher.”11

Topps named Ford its International League Player of the Month for August. He had a combined record of 17-7, 2.46 when the Braves called him up in September 1973. He made his big-league debut on September 10, just 10 days after countryman Ed Armbrister saw his first action for the Cincinnati Reds. His opponent was the veteran Juan Marichal, who got knocked out of the box in the first inning. Given a big early lead, Wenty — “befuddling the Giants with slow curves”12 — cruised to a complete-game 10-4 win. He did walk six men, though, which was unusual for him.

“That guy threw softer than Stu Miller,” fumed [San Francisco manager] Charlie Fox after the game. In his usual modest way, Ford added, “I throw breaking pitches mostly, then come in with my fastball — if you want to call it that.”13 Writers also asked Wenty — who himself covered sports for the Nassau Guardian in the offseason — how he would file his story. The good-humored rookie said, “You gotta lead with Aaron.” Hank, who was closing in on Babe Ruth, had hit his 710th homer.

In his next outing, Ford lost a tough one. The game was tied 2-2 with two outs in the 10th, his fourth inning in relief of Phil Niekro. Tony Pérez ended it with a homer. He made one more relief appearance and lost a bad start, and that was all for Wenty Ford in the majors: 1 win, 2 losses, 5.51 ERA.

Wenty was a non-roster player in spring training 1974. The Braves returned him to Richmond in March, and it was not a successful season. He appeared in only 18 games, starting 10, and posted a 3-7, 6.10 record. He still had some fine performances, including a two-hit shutout over Pawtucket in late June, but in July the Charleston Gazette called him a “nothing ball” pitcher. Ford’s youngest brother, Mario, recalls that Wenty was suffering from tendinitis and that he was also discouraged to be back in the minors. Yet even while things weren’t going well, he kept his sense of humor, as this July 1974 anecdote shows.

“The other day, [Clint] Courtney sat on the bench while his pitcher, Wenty Ford, came out of the runway from the club house. ‘Hey Wenty, do you think you might be able to pitch for us tomorrow?’ Ford replied: ‘Well, I guess so.’ ‘Guess so?’ Scraps retorted, ‘aren’t you sure?’ ‘Well, yes,’ Wenty explained, ‘but you didn’t talk like you’re very sure you want me to pitch.’ Then both broke out in laughter.”14

Ford was sent back to Savannah for the 1975 season, but he pitched just five games (1-0, 4.20). His brother Mario recalls a trade to the Yankees organization, but instead Wenty decided to come home to the Bahamas for good.

On November 23, 1974, he had married Vangy. They had two daughters, Wentia and Vanda. Wenty worked as a manager for the Playboy Casino at Sonesta Beach. During his leisure time, he was player-manager of the most successful local baseball team, the St. Pauli Girl Barons. He also worked on behalf of children’s baseball programs.

On July 8, 1980, Ford was driving home alone at around 2 or 3 A.M. from his shift at the casino, which had started the previous afternoon. He fell asleep at the wheel and ran into a utility pole on Prince Charles Drive. He suffered a broken neck and died immediately.

The day before Wenty’s funeral at St. Agnes Church, Blue Hill Road, a huge tent was erected on Windsor Park. There his body was laid out for viewing to the public; thousands turned out to pay their respects. Wenty was buried — in his baseball uniform, #33 — at Woodlawn Gardens Cemetery in Nassau.

On October 8, 2005, Wenty Ford’s picture was added to the Wall of Fame at Lynden Pindling International Airport. Vangy received the honor, given to the top sporting figures in the Bahamas, on his behalf. Also attending the ceremony were Ford’s sister Linda and his brothers Eddie and Mario (who played at Tuskegee and had pro potential too). Mario said, “It was a privilege for Wenty to be honoured seeing that he pitched in the major and minor leagues of baseball. It is a high accolade for him and we are proud that it has happened. . .It is a great feeling.”15

A little over four years later, on October 31, 2009, Ford posthumously entered the National Hall of Fame of the Bahamas. The Minister of Sports, Desmond Bannister, presented the awardees with a framed picture and record of their achievements. Vangy again accepted on her husband’s behalf. A ceremony at Government House followed when the busts of the 15 new members were completed.

Yet along with these higher-profile honors, Wenty’s memory also lives on in a subtle and equally significant way. His Hall of Fame teammate, Hank Aaron, visits the Bahamas every now and then. For example, he returned for Independence Day 2008 as the guest of the U.S. Ambassador. The next day, July 5, he addressed a group of aspiring young baseball players. Hank and Wenty weren’t that close, because the pitcher was with Atlanta for such a short time. Still, nearly 35 years later, he mentioned Ford by name to the children. He also emphasized staying in school and getting a good education — a message that Wenty Ford would no doubt have endorsed wholeheartedly.

Grateful acknowledgment to Mrs. Evangeline Ford, Mario Ford, and Wentia Ford for their assistance. Additional thanks to Susan Bailey and Chris Younes (Atlanta Braves organization) for getting Hank Aaron’s input.