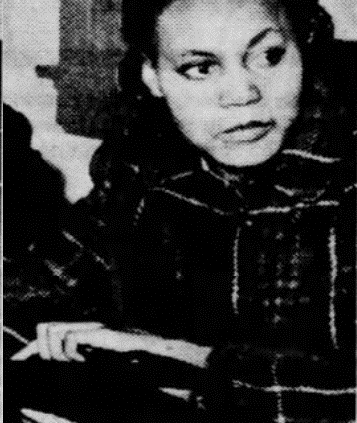 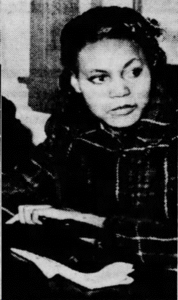 During the 1942 baseball season, many of the articles about the Kansas City Monarchs were written by Sam McKibben, the Kansas City Call’s sports editor. McKibben not only covered sports but was sometimes also asked to cover a breaking news story. And for the Black press, one of the biggest stories in early 1942 was the lynching of a Black man named Cleo Wright by a White mob in Sikeston, Missouri, about six hours from Kansas City. In addition to McKibben,1 among the other Black reporters who made the trip to cover that story was a young woman who had only recently graduated from college. Her name was Willie Bea Harmon, and she was working for the St. Louis Argus.2 However, her goal was to work in her hometown of Kansas City, preferably for the Call.

The 1941 City Directory for Kansas City already listed Harmon as an employee of the Call, but there is little evidence that she worked full time  for the newspaper until late in 1942. On the other hand, she had been hanging around the Call’s newsroom since she was in high school. As she told sportswriter Dan Burley in a 1944 interview, she first became interested in working there when a guest speaker, Frank “Fay” Young, the “Dean of the Black Sportswriters,” came to talk to her newswriting  class at Lincoln High School. While Young was best known for his work with the Chicago Defender, he spent several years working as the managing editor of the Call, and young Willie Bea was so inspired by him that she decided she wanted a job.3 She began as a “gofer,” but gradually she was given a chance to do some copyediting and then some occasional reporting. After high school, she went off to college to study journalism, and once she graduated, she went to work for the Argus until the Call had an opening. But it wasn’t for a news reporter – the Call needed an entertainment writer. By December 1942, she was writing a bylined column called the “Gossipel Truth.”

She was also experimenting with her name, alternately writing as Bea Harmon, W. Bea Harmon or Willie Bea Harmon. It seems to have been Dan Burley who began referring to her as Willa Bea Harmon, circa 1944; gradually, she started using “Willa” in her byline. As for her entertainment column, it was a blend of movie and concert reviews, as well as the latest information about local and national artists coming to town. It often ventured into social commentary, as she lamented how nearly every venue in Kansas City was segregated or remarked upon how White businesses were happy to take the money of Black patrons yet felt no obligation to treat those Black patrons with respect.

During 1942, Harmon was not covering sports at the Argus, nor did that seem to be a goal for her. She had been trained as a news reporter, and her focus was on current issues. Of course, given that her entire family was from Kansas City, she was undoubtedly aware of how well the Monarchs were doing; in addition, the Argus had a sports page, and the Monarchs were frequently covered, along with some of the other Negro League teams.4 When Harmon returned to Kansas City sometime in late 1942, she did get an opportunity to cover some hard news: Her duties included reporting on the courts and the police, in addition to working as the entertainment columnist.

Within a short time, everything changed. Throughout 1942 and 1943, a growing number of men were getting drafted and sent overseas to fight in World War II. Other men supported the war effort by working in the defense industry, and that is what Sam McKibben decided to do. He left the Call to work at a defense plant, and he didn’t return; in fact, he subsequently left journalism to dedicate his life to being a Baptist minister.5 Suddenly, in early 1943, there was an opening for a sports editor, and Harmon offered to give it a try.

She had always enjoyed participating in sports – mainly swimming and tennis – but by her own admission she was not very knowledgeable about professional baseball, and covering the Monarchs was a large part of being the sports editor. Fortunately, she had two excellent mentors, who taught her what she needed to know:  the Monarchs’ business manager (and former pitching star), Dizzy Dismukes, and the team’s co-owner, Tom Baird.6 She learned quickly, and by the start of the 1943 season, she was covering the Monarchs as well as reporting on college track and field, boxing, and other local sports. By April, she was bylined as the Call’s sports editor.7 (Harmon was not the first Black female sports editor. Nell Dodson, later Nell Dodson Russell, held that position at the Baltimore Afro-American in the late 1930s. By most accounts, these two women were unique for their era. When Harmon left the Call in late 1945, she was described by reporters as “the only woman sports editor in the country.”8)

In early 1943, a controversy arose that affected the Negro Leagues: the US Office of Defense Transportation, whose mission was to encourage Americans to conserve transportation resources (including gasoline and tires) by reducing unnecessary travel,9 decided to ban the use of privately owned buses by the 12 Negro Leagues teams that relied upon them.10 The Call noted that the owners had pleaded with ODT Director Joseph B. Eastman to reconsider, but Eastman refused to make an exception, thus putting Negro Leagues players in a nearly impossible situation.11 Harmon wrote about this issue on several occasions. For example, in her April 2, 1943, sports column, she took Eastman to task, accusing him of being willfully ignorant of the unique problems Black athletes faced in a segregated country. She dismissed his suggestion that the trains would be an acceptable alternative, and she invited him to see for himself why traveling through the Deep South by train would work much better for him and other White people than it would for Black people. She also criticized the Negro Leagues owners for having no real plan of their own and simply hoping for a miracle (which thus far had not arrived).12 Meanwhile, in her entertainment columns, she continued to speak out about racism, chastising Hollywood for stereotyping Black actors and actresses,13 and criticizing Kansas City theater and club owners for their patronizing treatment of Black customers – including her. Even though she was the theater critic for a widely-read newspaper, most White-owned venues refused to let her use the same door as the White reporters.14

Throughout the 1943 season, Harmon kept the Call’s readers informed about the latest Monarchs news. For someone who had never been a baseball reporter, she proved to have good instincts, and adapted well to her new duties. Known for being a talented writer, she was able to put those skills to use when reporting on the Monarchs’ games. One good example was her report from the East-West “Dream Classic” in Chicago. It was a game witnessed by more than 50,000 fans and featured a masterful performance by Satchel Paige.15 She not only noted the exciting plays; her thorough descriptions made readers feel as if they were there. Harmon also gained a reputation for truthfulness. She had learned from “Fay” Young that, even when covering the hometown team, it was important to be fair and factual. That year, due to a combination of injuries and the loss of key players to the military, the Monarchs did not get to the World Series. Harmon was sympathetic, but she was also accurate when describing how the team played throughout the season. When they played well, she praised them; but when they didn’t, she avoided making excuses. In addition, she offered readers deeper insights into what the players were like as people. For example, when Monarchs first baseman Buck O’Neil joined the Navy, she explained that he was more than just another skillful athlete. O’Neil, she said, was the kind of person who kept his teammates motivated, win or lose, and who played hard every game and never gave up. Of course, such a man was a major asset to the armed forces but, unfortunately for the Monarchs, it was a big loss for the team.16

From early 1943 until late 1945, Willa Bea Harmon earned the respect of her peers for her work on the baseball beat. When she decided to pursue a master’s degree in journalism, many of her colleagues, and many of her readers, expressed their disappointment that she was leaving. They all hoped she would return to the Call one day, but she never did. After getting her degree, she wrote for the Associated Negro Press and for Black magazines like Ebony, before marrying and moving to the West Coast. It is unfortunate that, thus far, the newspapers for which she wrote have not been digitized, limiting the number of people who can read her work. Whether writing about the entertainment industry or covering the world of sports, Harmon was unique – in a country that was segregated, and where women’s opportunities in journalism were often limited, she did not let anything stop her. She was a true pioneer in sports reporting.