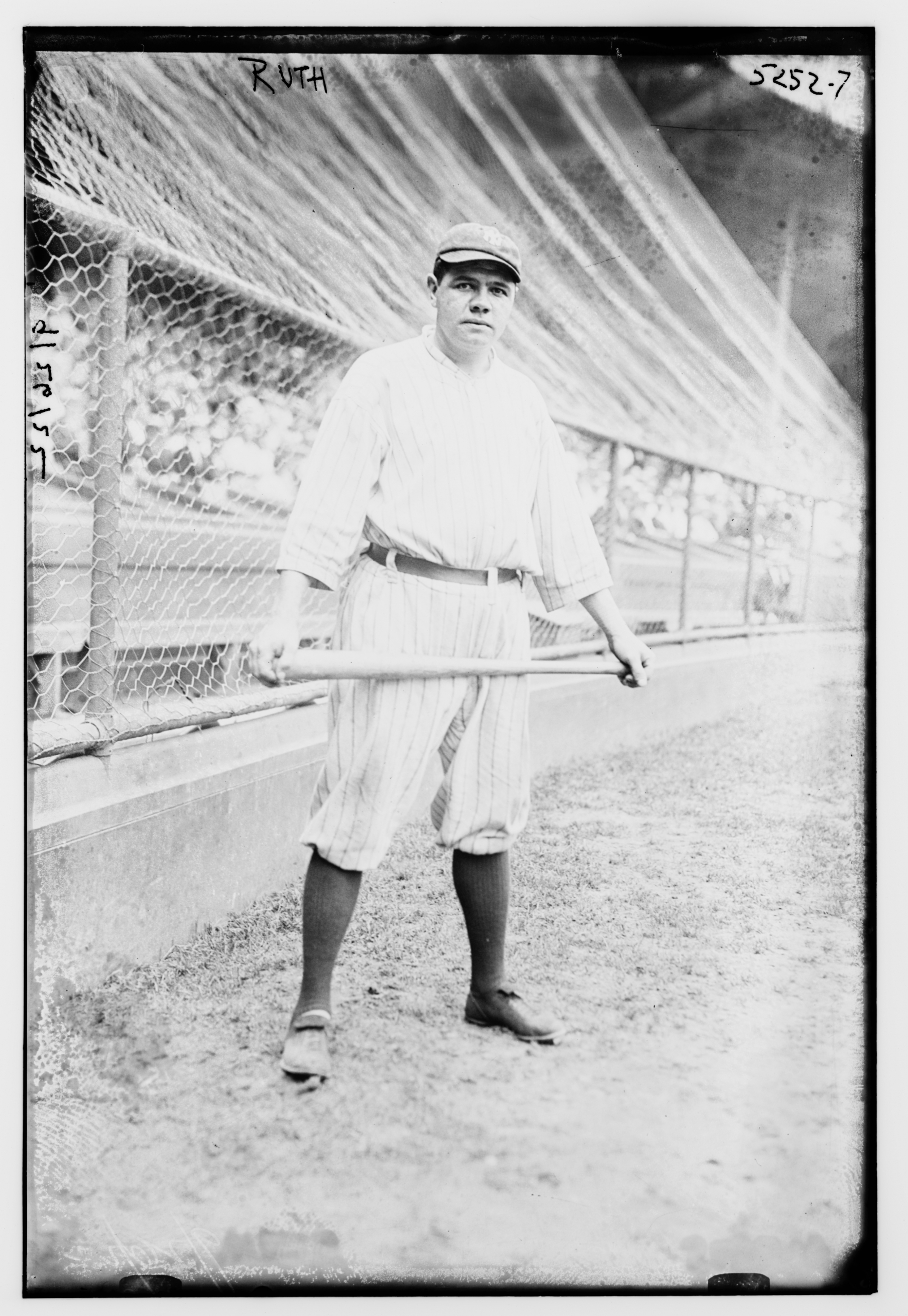 Babe Ruth opened the New York Yankees’ 1921 season by hitting safely in every at-bat. In five turns at the plate, Ruth came away with two doubles and three singles, leading the Yankees to an 11-1 victory over the Philadelphia Athletics before 37,000 fans at the Polo Grounds. According to the New York Herald, this was “the biggest opening day New York has had.”1

Carl Mays was the starting pitcher for New York. He had started on Opening Day in 1919 as well, earning a blowout victory (10-0) over the Boston Red Sox (and Babe Ruth).2 Opposing Mays on the mound in this game was fellow right-hander Scott Perry. This was Perry’s third consecutive season as the Athletics’ Opening Day starter.3

The game didn’t begin until after 3:30 P.M., due to all the fanfare. Dignitaries had to be seated and flowers were presented, with “all the mélange being drenched pleasingly in the strains of music from a band.”4 New York City’s Mayor John Hylan, from a box opposite the first-base line, “arose with due dignity and launched, with a slight loss of dignity, out in the general direction of Catcher Wally Schang the ball that meant the opening of New York’s baseball season.”5 Finally, it was time to Play Ball!

According to most accounts, it was a “close and sharply played contest for six and a half innings.”6 Ruth started his big day by singling with two down in the first and moving to third on Wally Pipp’s double to left, but both runners were stranded. The Yankees did break through in the second. After Ping Bodie led off with a double, it was Aaron Ward, not Ruth, who “made the first voyage to home run land.”7 Ward sent the ball well beyond the fence into the left-field seats for a two-run home run.

Ruth, the reigning home-run champion, kept his hits in the ballpark. He lined a double into right field to start the bottom of the third, and in the fifth inning, his double “struck the [center-field] fence on the first bound and was longer than many home runs he has hit.”8 Ruth tried to stretch the double into a triple and a splendid relay from center fielder Frank Welch to second baseman Jimmy Dykes to Dugan caught him at third base. So, through the first six innings of play, despite getting eight hits, New York managed just two runs.

Philadelphia had trouble mounting any offense. Tillie Walker singled into left field with two outs in the top of the first, but then Mays retired the next 17 batters in order, until Walker singled again with one out in the seventh. One out later, Joe Dugan launched a triple to left, driving Walker home with the Athletics’ sole run. Ruth tried to make a shoestring catch on Dugan’s sinking liner but missed, allowing the ball to bounce by him and permitting Dugan to get credit for a three-bagger. Mays retired Cy Perkins on a popup to strand Dugan on third, but New York clung to a 2-1 lead as its half of the seventh inning began.

The Yankees then turned the close contest into a rout. Schang led off the seventh by drawing a free pass and Mays reached on a bunt single. Chick Fewster sacrificed both runners up a base. Roger Peckinpaugh grounded an infield single to third baseman Dugan, and Schang scored. Ruth then “punched a one-bagger over short,”9 driving in Mays and sending Peckinpaugh to third. Pipp rolled a ground ball down the first base line for another single, and Peckinpaugh scored. Perry retired Bob Meusel and Perkins to end the inning, but New York had increased its lead to 5-1.

In the eighth, Bob Hasty took over the pitching for the A’s. Ward “opened hostilities”10 with a line-drive base hit over first. Hasty couldn’t handle Schang’s comebacker, and both runners advanced another base when Hasty did field Mays’ grounder cleanly for the first out. Fewster’s single brought Ward and Schang home for a 7-1 Yankees lead.

Peckinpaugh doubled into the left-center gap, bringing up Ruth. The slugger rolled a wobbler toward first base for a single, his fifth safety of the game. Fewster scored on the hit and Peckinpaugh reached third.

Pipp became the third Yankee of the inning to hit one back toward the mound. Hasty fielded it cleanly and threw home in time to get Peckinpaugh for the second out. Meusel, who had struck out twice in his previous four trips to the plate, was hit by a pitch, and the bases were loaded. Bodie tripled to the right field wall, and “in flocked Ruth, Pipp and Meusel”11 with three more runs. The Yankees had batted around. Ward grounded out to short for the third out, but New York had “sufficed to produce six runs and to make most everybody glad the game was almost over.”12 In their final two turns at bat, the home team had sent 18 batters to face Philly pitching, scoring nine times.

Mays retired the Athletics in order in the ninth to close out the win. With his “underhand, grass-clipping delivery,”13 he limited the A’s to one run on three hits in the complete-game victory. The New York Herald informed its readers that Mays “whirled his submarine ball past the knees of the batters, controlled it to a hair’s breadth, and the Athletics went at it with an upchopping motion which sent many a ball bouncing weakly along the infield grass.”14 He had faced only 31 batters.

Every one of the nine Yankees players scored at least one run. They tagged the Philadelphia hurlers for 17 hits, almost half of which came from Ruth (5) and Mays (3). The Philadelphia Inquirer explained to its readers the “reason for the small denominations of Babe’s hits this afternoon. He was in there batting with virtually one hand.”15 Ruth had injured his right wrist in spring-training camp and it was “still encased in lathers of adhesive tape.”16 Despite favoring the wrist, Ruth still managed to bounce a couple of doubles off the outfield fence.

This marked the third time in his career that Ruth collected five hits in a game. On May 9, 1918, in a game against the Washington Senators, Ruth (playing for the Red Sox) “poled out three doubles, one triple and a single,”17 off Doc Ayres and Walter Johnson. A season later, on September 5, 1919, playing in his final season with the Red Sox, Ruth was 5-for-6 in a game against the Athletics.

Batting third in the lineup, Ruth added to his regular season hitting streak; he had finished the 1920 campaign by hitting safely in his final nine games, going 17-for-35 (.486 in that stretch). Now, in 1921, after only one game, his line read:

(which equates to an OPS of 2.400). Ruth had scored a run and batted in two others. His first home run of the season came two games later (still against the Athletics), but by then his batting average had dropped to .500.

Throughout his career, Ruth had success as an Opening Day batter.18 In four Opening Day starts for the Red Sox, Ruth was 4-for-13 at the plate and earned three victories as a pitcher (with complete games in both 1917 and 1918). For the Yankees, Ruth played in 14 Opening Day contests, all as an outfielder, batting .451 (23-for-51).

2 In the April 23, 1919, Opening Day game, Ruth was 2-for-4 with two runs scored and three runs batted in. He hit his first home run of the season in that game off Mays. It was an inside-the-park home run at the Polo Grounds.

3 Perry had defeated the Yankees on April 14, 1920, in a complete-game, 3-1 win at Shibe Park. On April 23, 1919, he battled Washington’s Walter Johnson into extra innings at Griffith Stadium, as both hurlers tossed 12 frames of shutout baseball. Johnson blanked Philadelphia in the top of the 13th, and then the Senators put together three singles in the bottom half to beat Perry and the A’s, 1-0.

17 “Second Time Ruth Has Poled Out Five Hits,” New York Herald, April 14, 1921: 12. In his first 5-for-5 performance, Ruth pitched but batted fourth in the lineup. He lost the game in the bottom of the 10th inning. Ruth had played first base (his first game as a position player) just three days before, on May 6.