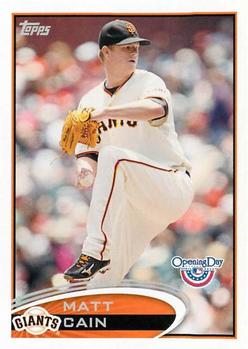 Opening Day is always a time for ceremonies and celebrations. For the 41,138 fans at the Giants’ home opener in 2012, this one was memorable even before the first pitch. The Giants were celebrating the 50th anniversary of their 1962 World Series appearance. Although they lost the Series in seven games to the Yankees, the first NL pennant for San Francisco was still worth celebrating. Willie Mays, Willie McCovey, Orlando Cepeda, Don Larsen, Alvin Dark, and Gaylord Perrywere among the 1962 Giants in attendance.1 Maybe all the applauding helped keep the fans warm: It was 53 degrees with a 12 MPH breeze (in other words, a typical San Francisco spring day).

The Giants had started the year on the road, and entered their home opener with a 2-4 record. They were tied for third in the NL West with the Rockies, 3½ games back of the Dodgers. The Giants’ starting pitcher, Matt Cain, wasn’t off to a great start either: He had a 7.50 ERA “earned” in a no-decision, pitching six innings in a loss on April 8.

Pirates pitcher James McDonald had also pitched six innings on April 8 in a no-decision, but his ERA was 3.00. Coincidentally, the Pirates were also 2-4, 2½ games back of St. Louis, but that put them in fifth place in the NL Central.

Cain’s top of the first was typical for this game: first-pitch strikes to all three hitters, no full counts, two swinging strikeouts, and an Andrew McCutchen popout for a quick inning. McDonald threw only two more pitches in the first than Cain did, but the results were quite different. He threw first-pitch balls to three of the five hitters he faced. After Melky Cabrera singled, Buster Posey came to the plate to a standing ovation. He was returning to the diamond nearly a year after a season-ending injury sustained in a home-plate collision.2 He hit a two-out double to score Cabrera. Aubrey Huff then singled, scoring Posey. Huff tried to take second but was caught in a rundown to end the inning with the score 2-0, Giants.

Cain continued his dominance of the Pirates in the second. Casey McGehee came close to an extra-base hit into center but Ángel Pagán tracked the ball through the wind, making a running catch and then bouncing off the padded wall. A strikeout and a groundout allowed Cain to finish the inning on only nine pitches. McDonald was almost as efficient in the bottom of the frame: Nate Schierholtz singled to start the inning but was caught stealing almost immediately. McDonald got out of the inning on two quick fly outs.

Cain had no trouble with the bottom of the Pirates’ order in the third: Pedro Álvarez struck out, Josh Harrison grounded out. McDonald swung at the first pitch, giving the ball a ride to deep center field, but Pagán caught it in Triples Alley. All the Giants accomplished in the bottom of the third was Cabrera’s walk.

There were no strikeouts for Cain in the fourth, just three groundouts. The last one was a close call at first on McCutchen’s roller over the mound: It took a great barehand throw by shortstop Brandon Crawford to get the out. McDonald opened by walking Posey, but he was left at first after three fly outs.

In the fifth, Cain struck out McGehee and Garrett Jones swinging (for the second time). Rod Barajas grounded out. Nothing doing for the Giants in the home half of the fifth.

The Pirates got their only hit of the game in the top of the sixth. After Álvarez struck out again (swinging at another changeup) and Harrison flied out, McDonald came to the plate. He singled cleanly into left field for his first of seven hits of 2012.3 That ended Cain’s bid for a perfect game, but earned him a standing ovation. McDonald was left on first when Alex Presley struck out swinging.

In the bottom of the sixth, Cabrera grounded out on the first pitch. Pablo “Panda” Sandoval hit one off the brick wall in right-center and rounded second, but put on the brakes when he saw how quickly the ball was fielded. Posey waited at the plate while pitching coach Ray Searage visited the mound to stall for time while lefty Tony Watson warmed up in the on-field bullpen. Posey popped out to right so Panda held at second. The Pirates intentionally walked Huff. Schierholtz looped one into center that fell just in front of McCutchen. (Perhaps he misjudged the effect of the wind since he took an unusual route to the ball.) Panda scored. Watson replaced McDonald, who had not been able to throw his curveball for strikes (partially explaining throwing only 43 of his 88 pitches for strikes). Watson got Crawford to ground out to end the inning with the score 3-0, Giants.

Neil Walker was Cain’s ninth strikeout victim in the top of the seventh. A groundout and a flyout finished his 1-2-3 inning. Evan Meek pitched a 1-2-3 bottom of the seventh for Pittsburgh.

Cain collected his 10th and 11th strikeouts in the top of the eighth, Jones swinging for the third time and Álvarez looking at yet another changeup. Cain left the mound to a standing ovation.

Pirates manager Clint Hurdle called on his closer, Joel Hanrahan, to pitch the eighth. Cabrera singled past the diving third baseman Álvarez. Panda flied out. With Posey at the plate Cabrera successfully stole second after a few false starts. Posey fouled off several pitches, one of which Pirates first baseman McGehee chased almost into the Giants’ dugout: he ended up falling down on the steps. Posey finally struck out. The first pitch to Huff went to the backstop, allowing Cabrera to take third. He could as well have stayed put: Huff hit his first home run of the year into McCovey Cove, triggering the usual kayak scramble for the ball in the water. Schierholtz flied out on the next pitch, ending the inning with the score 5-0, Giants.

Cain returned to pitch the top of the ninth with the crowd cheering each pitch. A fly out and two groundouts on 10 pitches wrapped up his dominant outing. Hugs and high-fives ensued as the Giants got their first 2012 homestand off to a memorable start.

The Giants went on to win their division and the World Series, although they didn’t take over the division lead for good until late August. The Pirates were tied for their division lead as late as July 18, but had a terrible August and September (18-38) and finished fourth, 18 games back of Cincinnati.

Cain lowered his ERA to a respectable 3.00 by the end of the game on his way to a 2.79 ERA at year-end. His game score was 96, the best to that point in his career. Amazingly, that wasn’t his best game of the year: He earned a 101 in his perfect game on June 13 against Houston. He was the National League starting pitcher in the All-Star Game and was sixth in the Cy Young Award voting. McDonald’s fortunes tracked that of his team: On July 18 his ERA was 2.93 with a 10-3 record, but he finished the year at 4.21 and 12-8.

2 The collision was with the Marlins’ Scott Cousins. The incident led Major League Baseball to adopt rule 7.13, informally known as the Buster Posey Rule, which states that “a runner attempting to score may not deviate from his direct pathway to the plate in order to initiate contact with the catcher (or other player covering home plate).” A runner violating the rule will be declared out, even if the fielder drops the ball.