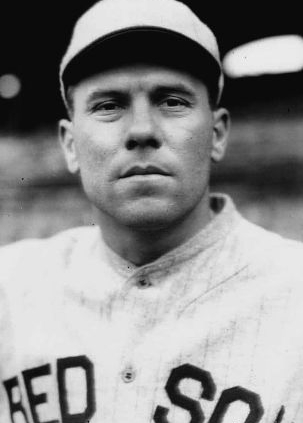 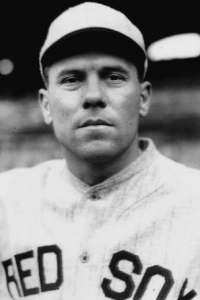 The game was the shortest official game in Boston Red Sox history, albeit a scoreless tie. It lasted only 50 minutes, called after five innings because of rain.

It was just the fourth game of the new season. Fans probably weren’t expecting much; the Red Sox had finished in last place five of the previous six seasons, escaping the cellar by only a half-game in 1924. In 1927 their eighth-place finish left them 59 games behind the first-place New York Yankees.

After winning the American League pennant back-to-back in 1924 and 1925, the Washington Senators had finished third in 1927.

The two teams were opening the season with five games, divided between Washington and Boston – an arrangement that allowed the AL to open its schedule in the nation’s capital, while also accommodating Massachusetts’ prohibition of Sunday baseball. After President Calvin Coolidge threw out the ceremonial first pitch at Griffith Stadium, the Red Sox won the opener, 7-5, on April 10. The Senators then won the first two games in Boston, 8-4 and 6-4. A Sunday date in Washington was to follow on April 15.

Herb Bradley was the starter for Boston and Milt Gaston started for the Senators.1 Both were right-handers. Gaston had amassed a record of 9 wins in 15 games against Boston in previous play, one of the losses coming four days earlier, on Opening Day.

Rain seemed to be in the offing before the game. It started right after the game got underway.

Neither team got the ball out of the infield in the first inning; the first two Boston batters grounded the ball back to Gaston and the third hit a roller to shortstop.

Bradley retired the Senators in the second, again without the ball leaving the infield, on three pop flies, two of them foul. Red Sox left fielder Ken Williams walked to lead off the bottom of the second. Buddy Myer bunted to sacrifice Williams to second, but he reached, too, when the ball was juggled by Washington shortstop Grant Gillis.2 Second baseman Bill Regan failed to lay down a bunt and instead popped up foul. Right fielder Doug Taitt hit a ball to left, and Williams tagged and took third, but catcher Charlie Berry grounded to third baseman Ossie Bluege for a force out at second.

First up in the third inning, Gillis singled into center field off Bradley, but the next three batters all flied out, to center, left, and center. After Bradley grounded out in the Red Sox third, shortstop Jack Rothrock hit a roller to first base and reached on a single when Gaston failed to cover the bag.3 First baseman Phil Todt popped up to his counterpart at first, Joe Judge. With center fielder Ira Flagstead at the plate, Rothrock was caught stealing, catcher Bennie Tate throwing to Bucky Harris at second base.

The 31-year-old Harris was the Senators’ manager as well as their second baseman. The Red Sox were managed by Bill Carrigan.

Both sides were set down in order in the fourth, only one of the balls reaching an outfielder.

The fifth inning was an eventful one, with both teams leaving two men on base.

Bennie Tate led off for the Senators and he doubled to right-center field. It was only the second hit of the game off Bradley, the other being the Gillis single in the top of the third. Bluege hit the ball to Rothrock at shortstop, a fielder’s choice – his choice being to throw to third baseman Myer. Myer dropped the ball, and Tate scampered back to second base, Bluege reaching safely at first base. Gillis popped up to second base for the first out. Bucky Harris came to the plate. As manager, he conferred with his baserunners and then stepped into the batter’s box.

The rain had picked up by this time and one run might have made all the difference in the game. The squeeze was on, but Harris crafted a decoy to try to fool the opposition. He “took a vicious swing at a high one, indicating that he was going to try to score the run with a single or a long fly.”4 The deception didn’t work, wrote the Boston Globe’s James C. O’Leary: “This gesture didn’t fool the Red Sox.”5

First there was a pitchout. Then Bradley threw his third pitch up and in, so close to Harris’s head that he “dropped his bat and backed away.” Berry caught the ball and Tate was something of a dead duck as he charged toward the plate. After the runner reversed direction, Berry threw to Myer at third, who threw the ball to Bradley, and after some back and forth, Bradley tagged out Tate. While the rundown was going on, Bluege had rounded second and taken third base. Harris walked, but Bradley stuck out Gaston – his first strikeout of the game, and the final out of the inning.

For the Red Sox, Regan grounded out, third to first and Doug Taitt flied out to left field. Charlie Berry walked. That brought up Bradley, who hit another slow roller to Judge at first base and sprinted to easily beat Judge to the bag. The Washington Evening Star suggested that both of Boston’s hits could have been outs save for Gaston’s “slowness at covering first base.”6 The Red Sox thus had runners on first and second, but Rothrock grounded out, second to first.

The Red Sox took the field for the top of the sixth, but before the inning commenced, play was halted by a “steady downpour” that caused the players to take cover.7 After about 30 minutes, plate umpire Brick Owens called the game. It had been, read a Globe headline, a “brief, but snappy game.”

Each pitcher had given up just two base hits, despite the conditions. Bradley walked one and Gaston walked two. The game had two errors, one by each side. The line score for both teams read 0-2-1.

Some 3,000 fans left the park. They had seen both pitchers throw a shutout, but the Post correspondent said it was with considerable “disgust.”8 The whole contest lasted 50 minutes – as of 2021, no “official” Red Sox game has been shorter. The Senators appear to have played two other games that were even briefer – a 40-minute game on July 24, 1920, against the St. Louis Browns that ended in a 1-1 tie and a 45-minute game on October 3, 1911, against the Philadelphia Athletics, a 2-0 win.

The scheduling was strange. Both teams left the ballpark to take the train to Washington, where they played each other the next day – a Sunday, when baseball could not be played in Boston. Washington won, 6-5, and the Red Sox got on a northbound train back to Boston to host the Yankees on Monday. Carrigan took 17 only players with him to the District, letting the others stay in Boston.

Five days later, on April 19, the Red Sox and Yankees played another quick game – the second game of a Patriots Day doubleheader, shortened by rain and called after six innings. That game lasted 66 minutes, with New York winning 7-2. Boston had won the first game, 7-6.

4 James C. O’Leary, “New Red Sox Battery Shows How to Wreck Squeeze Play,” Boston Globe, April 15, 1928: A20. Young of the Washington Post explained that Harris was playing on a hurt ankle and while a fly ball might have worked to bring home Tate, Harris might not have been able to run out an infield grounder and could have hit into a double play.