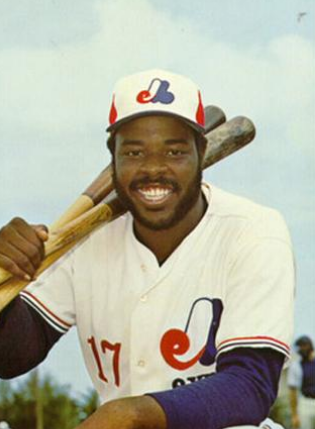 An estimated 350,000 fans greeted the Expos as they paraded through downtown Montreal in open-air vehicles on a chilly Thursday afternoon on the eve of their 1977 home opener.1 Baseball had captured the imagination of Montrealers even though the NHL’s Canadiens had just begun a playoff run for their second consecutive Stanley Cup. Buried under the wall-to-wall Expos coverage, the Canadiens were a mere afterthought in the sports section of that day’s Montreal Gazette.

Fans were eager to catch a glimpse of their much improved ballclub. They had suffered through a miserable 1976 campaign that saw their team lose 107 games, the most since their inaugural year of 1969. In a busy offseason, the Expos signed their first-ever free agent by luring second baseman Dave Cash away from the Philadelphia Phillies, and then they acquired slugger Tony Pérez from the Cincinnati Reds. The veterans bolstered an impressive group of youngsters who had come up through the team’s prolific farm system. Emerging Expos stars included Gary Carter, Andre Dawson, Ellis Valentine, Warren Cromartie, and Larry Parrish, all of whom were either 22 or 23 years old.

The Expos also featured a new manager, the irascible Dick Williams, who led the Red Sox to the pennant in 1967 and the Oakland A’s to consecutive World Series titles in 1972-73. He was, however, coming off a less-than-stellar stint with the California Angels, a team that did not respond well to his authoritarian ways.

Perhaps the biggest change for the Expos was the team’s move from quaint Jarry Park to the monolithic Olympic Stadium, the main venue of the 1976 Summer Olympics. To help secure Montreal’s MLB franchise in 1968, Mayor Jean Drapeau had promised the National League a domed stadium for the Expos in time for the start of the 1971 season.2 The stadium, with an unfinished tower still unable to suspend the roof, may have been six years late, but the Expos finally had their new home.3

It could have been worse. Olympic Stadium was on the verge of being seven years late, as contentious lease negotiations between the Expos and the Olympic Installations Board (OIB) dragged on into February of 1977, forcing the Expos to come up with contingency plans for playing yet another season in Jarry Park. An agreement was eventually signed a mere 44 days before the home opener, leaving little time for the OIB to transform Olympic Stadium into a major-league ballpark.4 In true Montreal fashion, a last-minute construction frenzy ensued, with workers onsite until just a couple of hours before the first pitch.5

Montreal’s opponent in the home opener was the defending NL East champs, the Philadelphia Phillies. The matchup was fitting, considering that the two teams had played the final five games at Jarry Park the previous season, with the Phils clinching the division in the next to last game of that series. Philadelphia sent its ace, Steve Carlton, to the mound for his second start of 1977. Lefty was coming off a season in which he had won 20 games for the third time in his career, although he was looking to redeem himself for an Opening Day loss to the Expos that saw him surrender home runs to Valentine, Pérez, and Carter at Veterans Stadium.

The Montreal starter was 26-year-old right-hander Don Stanhouse, who had joined the Expos’ struggling starting rotation in late May of 1976 and posted a 3.77 season ERA. Stanhouse was one of those rare pitchers who walked more batters than he struck out, yet he usually managed to get the job done.6 That wasn’t the case in his first start of 1977, however, as Stanhouse walked four Phillies and surrendered five earned runs in five innings in the second game of the season.

Stanhouse kicked off Olympic Stadium’s inaugural game in style by retiring the Phillies in order in the top of the first inning. In the bottom of the frame, Cash, Montreal’s new leadoff man, recorded the ballpark’s first hit by bouncing a ball up the middle and beating out the throw from second baseman Ted Sizemore. To the chagrin of Expos fans, Carlton promptly picked Cash off. With two outs in the inning, Valentine reached on another infield single, and he moved into scoring position on Greg Luzinski’s error, only to be stranded on a hard lineout by Pérez.

The dangerous Luzinski led off the bottom of the second inning with a walk off Stanhouse. After a one-out single by Tim McCarver moved Luzinski up to second, Expo-killer Dane Iorg doubled into left-center field to score Luzinski, although Tim Foli’s relay throw from Dawson nailed the 35-year-old McCarver at the plate to keep the score at 1-0.7 After a passed ball by Carter moved Iorg to third, Sizemore was walked intentionally to bring up the pitcher, Carlton. The move backfired when Stanhouse hit Carlton with a pitch, and then Jay Johnstone doubled home Iorg and Sizemore to put the Phillies up 3-0.

The Expos had runners on first and second with two out in the bottom of the second inning when Stanhouse, a .212 hitter the previous season, was given the quick hook by Williams in favor of a pinch-hitter. Up to the plate stepped the weak-hitting Pete Mackanin, who possessed a .212 batting average up to that point in his career. Mackanin struck out to end the inning. After the game, Williams was asked about the move. “I don’t think I took him out too quickly,” he said. “He was behind all of the hitters in that second inning and that’s when you get hurt. We had two men on base and I needed some runs. I don’t know how they did it before around here and I don’t care. That’s the way I operate and I’ve had success.”8

In the bottom of the third inning, Valentine hit Olympic Stadium’s first home run, a solo shot deep into the left-field bleachers, to cut lead to 3-1. “It was an inside fastball,” recalled Valentine. “He (Carlton) tried to jam me.”9

With one out and runners on second and third in the top of the fourth inning, Carlton hit a bloop single to left field to score McCarver. After Johnstone flied out, Expos second baseman Cash made a costly two-out error on a groundball off the bat of Larry Bowa to allow another run to score and put the Phillies up 5-1.

Philadelphia put the game out of reach in the top of the seventh inning with a two-run home run by Luzinski that extended the lead to 7-1. Valentine added an RBI groundout in the bottom of the eighth inning to make the score 7-2, but that was as close as the Expos could get. Carlton scattered 10 hits, three of which were of the infield variety, on his way to the complete-game victory.

The 57,592 fans in attendance, most of whom were playing hooky from work or school, smashed the record for the largest crowd to ever watch a baseball game in Canada.10 Given the size of the crowd and the limited preparation time, it wasn’t surprising that stadium operations were far from perfect. The gates didn’t open on time, concessions were chaotic, and there were excessively long washroom lineups, yet the fans still went home smiling after the loss.11

Expos beat writer Ian MacDonald put an optimistic spin on the fan experience at the cavernous new ballpark. “The fans who loved the comfy confines of Parc Jarry, the closeness and intimacy with the players, will take time to adjust,” he predicted.12 Sadly, they never really did. While the fans endured Olympic Stadium’s many weaknesses when the Expos were competitive, relatively few were willing to make the sacrifice when the team had no realistic chance of making the playoffs.13

Unlike the fans, the players almost universally despised the Expos’ original home, with its cramped quarters and poor playing surface, although they usually didn’t air those opinions in public when there was no alternative. National League teams, perhaps with Jarry Park still fresh in their minds, initially gave Olympic Stadium mostly positive reviews. “The field is perfect,” raved Carlton. “Montreal is finally in the big leagues.”14 Philadelphia manager Danny Ozark was also impressed with the support shown by Expos fans. “I have always known that Montreal was a great baseball town,” he said. “Just look at this crowd today. … When 57,000 come to a baseball game in the middle of the Stanley Cup playoffs you know you’ve got something going.”15

2 Jean Drapeau’s letter to the National League in 1968 promising a domed stadium by 1971 was written without the authorization of the city council, and so it wasn’t worth the paper it was printed on. To get authorization for the ballpark, Drapeau first needed to win Montreal’s bid for the 1976 Summer Olympics, which didn’t happen until May of 1970. Jonah Keri, Up, Up & Away: The Kid, The Hawk, Rock, Vladi, Pedro, Le Grand Orange, Youppi!, The Crazy Business of Baseball, & the Ill-fated but Unforgettable Montreal Expos (Toronto: Random House Canada, 2014), 10-11.

3 The Expos didn’t play their first game under the Olympic Stadium roof until April 20, 1987 — more than a decade after the inaugural game there.

5 A similar scene of hurried, down-to-the-wire construction had occurred at the leadup to the World’s Fair in 1967 (Expo 67) and the 1976 Summer Olympics.

6 Shortly after Don Stanhouse joined the Orioles in 1978, Baltimore manager Earl Weaver gave him the nickname Full Pack in honor of the number of cigarettes Weaver would smoke to calm his nerves during a Stanhouse outing.

10 The attendance record set in the 1977 home opener was broken twice during the 1979 season. The second record-breaker that year was on September 16, 1979, when 59,282 fans filled Olympic Stadium for a doubleheader between the Expos and the St. Louis Cardinals. It remains the franchise attendance record as of the end of the 2018 season.

12 Ian MacDonald, “Expos Give Perez a Lesson in Warm Welcome.”

13 Were it not for the 1981 strike that wiped 25 home games from their schedule, the Expos would have drawn over two million fans to Olympic Stadium for five consecutive seasons, 1979 to 1983. They ranked fourth in major-league attendance for three consecutive seasons (1981-83). They were also sixth in attendance in 1980 and eighth in 1979.

15 Doug Gilbert, “The Stadium Was the Star on Opening Day.”