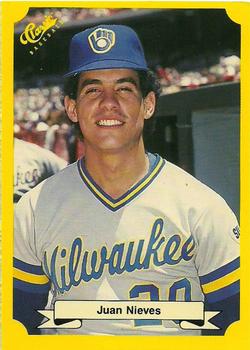 The beginning of the 1987 season had been a fun ride for the Milwaukee Brewers. After they beat the Baltimore Orioles on the nights of April 13 and 14, their record was 8-0. This was a Milwaukee team that had finished in sixth place in the American League East Division in 1986. It appeared that 1987 might bring a happier result for the team.

The Orioles had also struggled in 1986, finishing last in the American League East with 89 losses, but had also gotten off to a good start in 1987, winning five of their first six games. However, after losing the first two games of the Milwaukee series, they now had three losses.

For the final game of the series, Juan Nieves was the starting pitcher for the Brewers and Mike Flanagan took the hill for Baltimore. Nieves had won his first start of the season against the Texas Rangers but was a bit lucky in that he gave up six runs and eight hits in 5⅓ innings. Flanagan had been hit hard by the Cleveland Indians in his first start but the Orioles prevailed, winning 12-11 in 10 innings.

This game featured some of baseball’s biggest stars. Paul Molitor and Robin Yount were in the starting lineup for the Brewers. The Orioles featured Cal Ripken Jr. and Eddie Murray. All four would eventually be enshrined in the Baseball Hall of Fame. Other notable players in the starting lineup were Cecil Cooper for the Brewers and Fred Lynn and Ray Knight for the Orioles. Knight had signed with the Orioles in the offseason after playing with the World Series champion New York Mets in 1986. Knight was the MVP of the but was unable to agree on a contract with the Mets and signed a two-year deal with the Orioles.1

The weather for this April 15 night contest was not ideal. The forecast was for a chilly evening with the possibility of rain. A cold front that was headed to the region could make the night even more uncomfortable. The chill didn’t seem to bother either pitcher as they retired the opposition in order in the first inning. In the top of the second, Flanagan walked Greg Brock with two outs but retired Jim Paciorek on a fly to right field. In the bottom of the inning Murray led off with a liner to left field but Paciorek made a diving catch.2 After another out, Nieves walked Knight but Lee Lacy flied out, ending the inning.

Neither team scored in the third inning. With one out in the top of the fourth Dale Sveum hit a home run, giving Milwaukee a 1-0 lead. Ripken opened the bottom of the inning with a line drive that Molitor speared at third. Murray then popped up to the catcher and Lynn flied out to center field. In the bottom of the fifth, Molitor made another outstanding play on Floyd Rayford’s line drive. Neither team scored in the sixth inning. Nieves had still not allowed a hit.

In the top of the seventh, Flanagan encountered some difficulty. Paciorek led off with a double. Bill Schroeder beat out a bunt, moving Paciorek to third. Jim Gantner flied out to left field, but Molitor doubled to left field, scoring Paciorek. When left fielder Ken Gerhart misplayed Molitor’s hit, Schroeder also scored, giving the Brewers a 3-0 lead. Dave Schmidt replaced Flanagan and got out of the inning with no further scoring.

In the bottom of the seventh, Nieves appeared to be a bit rattled as he walked leadoff batter Murray on four pitches.3 Lynn then hit a sharp grounder up the middle that Nieves appeared to deflect. The ball was handled by shortstop Sveum, who turned it into a 6-4-3 double play. Knight’s popout ended the inning. After the game, Nieves said of the seventh inning, “I was so pumped up. I was trying to throw the ball through the catcher and the backstop. It wasn’t just Eddie Murray. They have lot of big bats in their lineup.”4

In the Brewers’ eighth, Cecil Cooper’s leadoff single followed by Sveum’s double put runners at second and third. Brock then homered, making the score 6-0. Schmidt then retired the Brewers. In the bottom of the inning, Nieves set down the Orioles in order, striking out John Shelby and Rayford for the last two outs. In the top of ninth, Glenn Braggs hit a home run. The Brewers led 7-0.

As the game entered the bottom of the ninth, the Orioles remained hitless. To preserve his no-hitter, Nieves had to face Gerhart, Rick Burleson, and Ripken. Gerhart led off by grounding out to Molitor. Burleson hit a soft liner to Molitor for the second out, bringing up Ripken. After two balls, Bill Schroeder, the Brewers catcher, decided to put Ripken on base. “I didn’t want this to slip away. I didn’t want the kid to lose a no-hitter on a 2-and-0 pitch,” he said.5

The dangerous Eddie Murray was now at bat. Murray drilled a fly ball to deep right-center field. Yount, the center fielder, ran approximately 15 yards, dived to his left, and caught the ball, preserving the no-hitter.6 Yount commented about the catch, “I didn’t have time to think. I wasn’t going to do anything but catch it. You don’t think about it, you just react. I’m just happy we accomplished a no-hitter.”7 Tom Trebelhorn, the Brewers manager, said of the catch: “When it came off the bat, it started to hang a little bit and I thought Robin would’t have any problem with it. Then it started to die and I thought, ‘Oh gee, there goes the kid’s no-hitter.’ It was just a remarkable game.”8 Cal Ripken Sr., the Orioles manager, said, “I didn’t think Eddie’s ball was going to drop when I saw Robin break for it. The guy’s a pretty good center fielder and when he gets a jump like that he’s going to catch it.”9

Nieves said he had a “mediocre fastball and my slider was awful.”10 As to whether he knew he was pitching a no-hitter, he commented, “I didn’t really think about the no-hitter until the last out, when all of my teammates started tackling me.”11 Nieves also said, “I think I’m going to drink a couple big bottles of champagne, then I think it will all hit me.”12

In pitching the no-hitter, Nieves struck out seven batters and walked five. He threw 128 pitches, Nieves’ no-hitter has been the only one by the Brewers through the 2019 season.13 It was also the first no-hitter pitched against the Orioles in Memorial Stadium since they came to town in 1954.14

The no-hitter was the high-water mark for Nieves. He finished the season with a record of 14 wins and 8 losses but with an ERA of 4.88. In 1988 he suffered a career-ending shoulder injury and never again pitched in the major leagues. He returned to the major leagues in 2007 as the bullpen coach for the Chicago White Sox. While with the White Sox, he was mentored by their esteemed pitching coach, Don Cooper. In 2013 he was hired as the pitching coach for the Boston Red Sox and was with them when they won the World Series that year. He was fired after the 2015 season and was the Miami Marlins pitching coach from 2016 through 2018.

The Brewers improved substantially in 1987, winning 91 games and finishing third in the American League East, seven games behind the division-leading Detroit Tigers. The Orioles once again struggled, losing a very disappointing 95 games.

Memorial Stadium was demolished after the 1991 season as the Orioles moved to Oriole Park at Camden Yards. However, the memories of Nieves’ no-hitter and Yount’s thrilling catch to end the contest on a very cold night in April 1987 still endure. To quote Tim Kurkjian, “The 11,407 who saw it can tell their kids they witnessed probably the greatest finish to a no-hitter in baseball history.”15