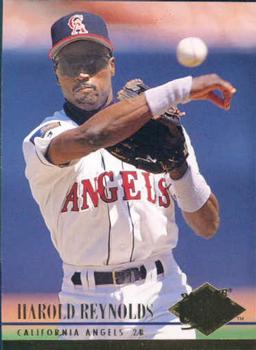 Those fans among the 20,413 at the Angels-Blue Jays game on April 15, 1994, who left after the seventh inning must have been shocked when they eventually heard the final score. Through seven innings, California led Toronto, 6-3, in what could be describe as a typical major-league game, but over the next two innings the teams combined for 17 runs before the Angels pushed a run across in the bottom of the 10th for a wild 14-13 win.

Four days earlier, the Angels had staged a wild rally in the bottom of the ninth against Cleveland in which, trailing 9-1 with two outs and no one on, they scored five runs and had the tying run at the plate only to fall short when Bo Jackson struck out swinging to end the game.

The Blue Jays and Angels were each playing their 11th game of the season when they met at Anaheim Stadium. California had captured the first game of the season between the teams the previous evening by a 6-4 score and entered this game with a record of 5-5, while Toronto was 6-4.

The game started slowly and was scoreless after two innings as veteran Dave Stewart, seeking his 161st career win and his third of the season, battled against 21-year-old Brian Anderson, who was after his second major-league win. In the top of the third, the Blue Jays scored first on a two-out single by Devon White that scored Ed Sprague, who had walked and advanced to third on a pickoff throwing error by Anderson.

Foreshadowing things to come, California responded with a rally in the bottom half of the frame. Greg Myers led off with a single to left and with one out Gary Disarcina walked. Both runners moved up when Chad Curtis grounded out to the catcher, Pat Borders, and then a single by Dwight Smith gave the Angels a 2-1 lead. Tim Salmon followed with a homer to make it 4-1.

In the fourth, Eduardo Perez homered to increase the Angels’ lead to 5-1.

Toronto trimmed the lead in the sixth with RBI doubles from Paul Molitor and John Olerud. In the bottom half, Perez slammed his second homer of the game to put the Angels up 6-3.

After a scoreless seventh inning, the game became a high-scoring affair. Scott Lewis, who had pitched the seventh in relief of Anderson, allowed a double to White and a walk to Molitor to start the eighth. When Joe Carter reached on an error by third baseman Damion Easley with one out, Bob Patterson came in and gave up a single to Olerud before striking out rookie Carlos Delgado. Mike Butcher entered in relief and immediately gave up a two-run double to Sprague and an RBI single to Borders as the Blue Jays built an 8-6 lead.

In the top of the ninth, the Blue Jays seemingly put the game out of reach when they plated five more runs to increase their lead to 13-6. Butcher gave up singles to White and Alomar and, following Alomar’s steal of second, a two-run single to Molitor. Bill Sampen relieved Butcher but didn’t fare any better as he gave up a single to Olerud and a three-run home run to Delgado. The blast was part of a hot start for Delgado, his seventh homer and 15th RBI of the season in just his 40th at-bat, but he would homer just twice more before being sent down to Triple-A Syracuse in early June.1

With the Angels down six runs with three outs to go, Myers led off with a single to right, Harold Reynolds walked, and Disarcina singled to third to fill the bases against Mike Timlin, who had taken over for Stewart to start the eighth inning. After Curtis was called out looking, Jim Edmonds, who had replaced Smith in left field to start the eighth, slapped a single to left to score Myers. Salmon walked to force in Reynolds and bring Todd Stottlemyre into the game to pitch for Toronto. Chili Davis greeted the new hurler with a base hit to plate Disarcina, and Easley followed with a single to chase home Edmonds. Perez lined a sacrifice fly to left field for his third RBI of the game, to bring home Salmon and make the score 13-11.

Duane Ward, Toronto’s closer and the AL leader with 45 saves in 1993, would normally have been called on to quash the Angels rally but he had been placed on the disabled list earlier in the month with tendinitis in his bicep and would miss the entire season.2

The Angels were down to their final out when Jackson was called on to pinch-hit for Myers and walked to reload the bases. The 11th batter of the inning was Reynolds, who hammered a ball over the head of Carter in right that bounced into the stands for a ground-rule double.3 Davis and Easley scored to tie the game but Rex Hudler, running for Jackson, was forced by rule to stop at third base. Angels manager Buck Rodgers said later, “If Reynolds doesn’t hit the ball so hard, we win it then and there.”4 With Reynolds on third as the winning run, Disarcina grounded out to shortstop and sent the game to extra innings.

Craig Lefferts took over on the mound for California to start the 10th and quickly retired Alex Gonzalez on a grounder to short and White on a close play on a grounder to third. Alomar and Molitor each singled to put the go-ahead run in scoring position but Lefferts kept Toronto off the scoreboard by getting Carter to line out to left field.

Scott Brow was the Blue Jays’ choice to pitch the home half of the 10th. After striking out Curtis (who finished 0-for-6, the only Angels starter without a hit) and Edmonds, he gave up an infield single to Salmon and a walk to Davis. Easley stepped in the box and sent the crowd home happy when he lined a single to left field to score Salmon with the winning run and atone for his error in the eighth inning which allowed Toronto to score four unearned runs.

Toronto manager Cito Gaston would not be around to see the ending, having been ejected in the top of the 10th for arguing and making contact with first-base umpire Rick Reed after a close play at first base. He eventually served a three-game suspension.5

The winning pitcher was Lefferts, who picked up the 58th and final victory of his 12-year career, in which he appeared in 696 games. The loss went to Brow, the second of his four career losses.

Rodgers attributed the comeback in part to the Angels no longer being intimidated by the two-time-defending World Series champs, citing a bench-clearing brawl between the teams from the previous June 2 in which Easley was ejected. “Last year, we were a little intimidated by that club, and we had to have a brawl to get rid of it. But now, there’s no way that we are intimidated by them. In fact, we enjoy playing them.”6

“It was quiet in the dugout when we came up in the ninth,” Easley explained. “Buck said, ‘Let’s have some good at-bats and let’s see what happens.’ Everyone had great at-bats, and this is the way it turned out.”7

The comeback tied the largest in Angels team history, previously accomplished on August 29, 1986, when Dick Schofield capped an eight-run ninth inning against Detroit with a game-ending grand slam.8 Schofield, now a utility infielder for Toronto, sat watching the Angels comeback from the opposing dugout.

The 14 runs scored by the Angels were the most runs Toronto allowed all season and the most runs California scored in a game in 1994. (They also scored 14 on July 30 at Texas.) It would be more than 14 years before the Angels would again allow 13 or more runs in game in which they won (in a 15-13 victory at Texas on September 19, 2008).9

The dramatic victory put the Angels a half-game up in the standings of the newly realigned American League West. Despite a record of 47-68, they were only 5½ games back when the season ended on August 11 due to the players strike. Toronto finished 55-60, but 16 games back in the stronger AL East.

In addition to the references cited in the Notes, the author consulted Baseball-Reference.com and Retrosheet.org.