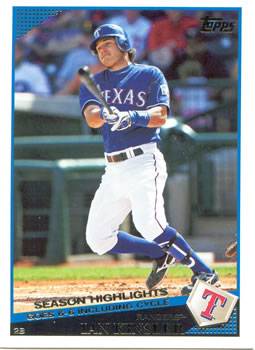 They say everything’s bigger in Texas. On April 15, 2009, in only the ninth game of the season, Texas Rangers second baseman Ian Kinsler entered the contest against the Baltimore Orioles batting .375. That day was designated as Jackie Robinson Day in the major leagues. Wearing Number 42 like every other player on the field, Kinsler put on a show that would have made Jackie proud, hitting for the cycle before his home crowd of 17,539 fans.

The Orioles jumped on Rangers starter Kris Benson in the top of the first inning. Brian Roberts walked and Adam Jones followed with a double. Nick Markakis and Aubrey Huff both had RBI groundouts, and the Orioles led 2-to-0. Kinsler doubled to lead off the bottom of the first, and he scored on a single by Josh Hamilton. “They got up two runs in the first and I was just trying to get us back in the game, “Kinsler said. “I was able to hit a double and the rest of the game I was just trying to play the game. I’m not thinking about the cycle. I’m thinking about doing what you need to do to win the game.”1

Benson pitched himself into a jam in the second, loading the bases on a double by Luke Scott, walk to Cesar Izturis, and a line-drive single by Roberts. Benson walked Jones, bringing in Scott. Baltimore pitcher Mark Hendrickson had a 1-2-3 second, but then Kinsler came up in the bottom of the third with one out and homered to deep left-center. Michael Young reached on an error by shortstop Izturis, and Hamilton forced him at second. Then Hamilton stole second base. With two outs, Andruw Jones walked, Hank Blalock singled to drive in Hamilton, and Marlon Byrd doubled, bringing in Jones. The Rangers had taken the lead, 4-3, with Kinsler’s blast and two unearned runs.

In the bottom of the fourth 12 Rangers batted and they got eight runs, but only five hits. Elvis Andrus walked to lead off, and Kinsler singled to left field. Young reached and Andrus scored on an error by Orioles second baseman Roberts. Hendrickson got two outs (though he walked Jones intentionally), but then Byrd singled, scoring Kinsler (who along with Young moved up on stolen bases) and Baltimore skipper Dave Trembley went to the bullpen. Radhames Liz replaced Hendrickson and gave up a monster grand slam to Nelson Cruz. Jarrod Saltalamacchia walked, and Andrus followed with an RBI triple. Kinsler singled for the second time in the inning, bringing home Andrus. Eight runs, only three earned.

Texas added a run in the fifth, and the Orioles’ Chad Moeller homered with two down off Benson in the sixth, making the score Texas 13, Baltimore 4. Andrus walked in the Texas sixth, bringing Kinsler to the plate. He worked a full count and the “ripped a drive high and deep toward the 407-foot sign in right center.”2 He needed a triple for the cycle. His teammate Marlon Byrd told sportswriters, “When the ball got in the air, everybody in the dugout was on the top step, hoping it would fall in.”3 Of course, it did, and Kinsler had accomplished the rare feat of hitting for the cycle. He said, “I knew I had the opportunity to hit for the cycle. I was hoping I got it over [Adam Jones’s] head and then I was hoping it would rattle around. Whether he got it cleanly off the wall or not, I was going to go for it.”4

Kinsler doubled to left in the eighth inning to drive in Andrus again. In that frame the Rangers batted around again and scored four times off reliever Matt Albers. Baltimore got two runs in the top of the ninth on Jones’s two-run homer, and the final score was Texas 19, Baltimore 6.

Kinsler had a 6-for-6 day, with five runs scored, four runs batted in, and 13 total bases. His batting average rose 99 points, to .474. Byrd collected five hits, but was overshadowed by Kinsler.  Cruz had a career-high six runs batted in, and the Rangers snapped a five-game losing streak. The Rangers’ 19 runs were the most since they scored 30 on August 22, 2007 (also against the Orioles).5 Ten of the Rangers’ runs were unearned. Benson earned his first victory of the season. Only Young did not get one of the 19 Rangers hits, and only Blalock did not score a run for the Rangers.

Jackie Robinson, a second baseman for the Brooklyn Dodgers, had broken the major-leagues’ color barrier 62 years before Kinsler’s magical day, and many felt as if his spirit was present at Rangers Ballpark in Arlington. After the game, Kinsler said of his feat, “It is more special to do it on Jackie Robinson Day. He’s the guy who could do everything in a game, hit triples, hit home runs, steal bases, score runs, do everything. It is weird that it’s Jackie Robinson Day and I’m playing second base, but it’s great it happened that way.”6 Kinsler became the first major leaguer since the 19th century to collect six hits in a nine-inning game in which he hit for the cycle.7

With the offensive outburst, Kinsler became just the second Ranger to collect six hits in a game. Alfonso Soriano had done it first on May 8, 2004, against the Detroit Tigers.8 Kinsler became the fourth Texas player to hit for the cycle, after Oddibe McDowell (July 23, 1985), Mark Teixeira (August 17, 2004), and Gary Matthews Jr. (September 13, 2006). Kinsler’s skipper, Ron Washington, said of the second baseman, “He took the game over in every aspect. Kinsler got us started from the first pitch and didn’t let up.”9 Kinsler said, “Opening Day [2006], my first big-league game, was pretty special. But as far as performance on the field, this has to top it.”10

2. According to mlb.com, the last player before Kinsler to collect six hits and hit for the cycle in a game was William Farmer Weaver of the Louisville Colonels, on August 12, 1890.12 But espn.com reported that Sam Thompson of the Phillies accomplished the feat on August 17, 1894.13