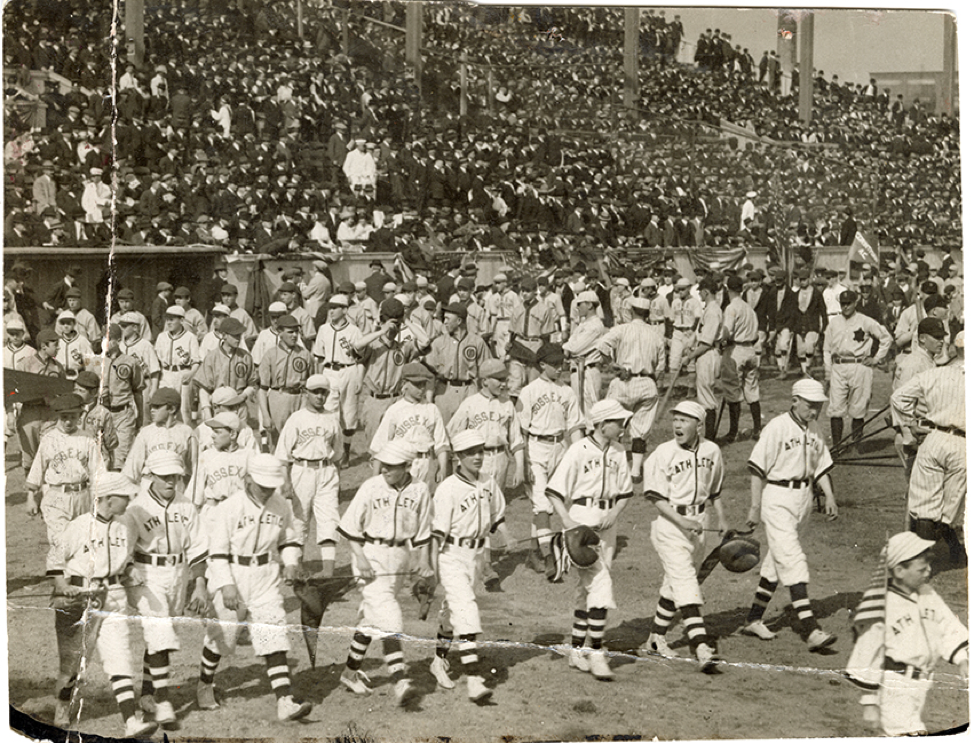 “Newark and its surrounding hamlets were seized with a violent attack of baseball yesterday, accompanied by a high fever and laryngitis. The ailment can be directly traced to the opening of the Newark Federals at their new, roomy park in Harrison. The epidemic spread among nearly 25,000 Jersey folk who jammed the new park to see ‘Whoa Bill’ Phillips’s ‘Peps’ make their home debut against Otto Knabe’s Baltimore Terrapins. The only thing the ‘Peps’ won was admiration. They lost the ball game by a score of 6 to 2.”1

And so began the first and only2 — until the Negro Leagues were retroactively designated as major league by the Commissioner’s Office in December 2020 — major-league baseball season in the Garden State.

After the 1914 season, the Federal League wanted a second team in the New York area to “achieve true major league status”3 and originally planned to move the Kansas City franchise, against the wishes of that team’s ownership. Newark was chosen as the city in February 1915, but the Kansas City stockholders took the league to court. It wasn’t until March 12 that the situation was settled with the decision to instead move the Indianapolis club, the 1914 FL champions, to Newark.4

Construction on the ballpark began only 46 days before the scheduled start of the 1915 season,5 with team owner Pat Powers quoted in the Newark Evening News as saying that “the workers would have to demonstrate ‘pepper’ to get the park finished on time, just as the team would have to demonstrate ‘pepper’ on the field to win games.”6 The press picked up on this description and assigned to the club the nickname Peppers, and it was said that no actual green or red peppers could be found in Newark on the day of the home opener because fans had bought them to wear pinned to their clothes at the ballpark.7

When Opening Day arrived, the bulk of the ballpark was completed and the Peps drew a reported 25,000 to 26,000 fans8 — more than the 20,000 bugs who had attended the New York Giants’ opener against Brooklyn two days before.9 “The stands which are not yet under roof have a greater seating capacity than the Baltimore grounds and right field is very deep. Left field is rather short. The grandstand is a whopper, one of the largest in the country. The park, when completed, will be a fine addition to the circuit,” wrote Baltimore Sun reporter Vincent deP. Fitzpatrick.10 Sporting Life put the distance from home plate to the right-field foul pole at 397 feet.11

At the urging of Mayor Thomas L. Raymond, Newark businesses shut down for the day at noon, and a parade featuring the Peppers, Terrapins, residents, and local baseball teams — reports vary from 50 to 100 of them — from northern New Jersey marched to the stadium, making it literally a banner day:

Everybody in Newark and its environs quit work when the whistle blew at 12 o’clock, put on their new Spring spangles, and got ready for the big parade. It was just like Fourth of July or circus day.

Almost every man and boy in town walked in the parade carrying big banners welcoming the Federal League to Jersey, and those who couldn’t walk rode in automobiles. … The long line of baseball fans was punctuated with numerous brass bands and drum corps.

All the uniformed amateur baseball teams from the entire countryside walked till they were tired.12

Among the dignitaries and politicians joining Powers for the pregame ceremonies were club business manager Billy Murray; Federal League President James Gilmore; and the mayors of several surrounding towns, including Mayor Raymond of Newark, who threw out the ceremonial first pitch.13 Ned Hanlon, the former player, manager, innovator, and future Hall of Famer, was also there as the primary shareholder of the Terrapins.14

The fans and VIPs were also treated to an impromptu scuffle on the field during the festivities:

This fist fight started when two rival moving picture promoters got into a dispute. Pat Powers tried to separate them, and, failing in this, had them ordered off the field. The crowd enjoyed this side-attraction immensely. Real blood was shed, one of the combatants receiving a wicked cut over his left eye.15

Right-hander Cy Falkenberg, who defeated the Terrapins on the season’s Opening Day six days earlier to spark a Peppers sweep of their first three games, got the start for Newark and didn’t allow a run through the first two innings. The Peps threatened in the bottom of the second when Germany Schaefer doubled with one out and Jimmy Esmond walked, but Baltimore left-hander Bill Bailey got Al Scheer to hit into a double play.

In the top of the third, Bailey drew a walk to start the inning and Terrapins leadoff hitter Benny Meyer reached on an error by shortstop Esmond. Falkenberg threw out Bailey at third on a fielder’s choice when Baltimore player-manager Otto Knabe bunted, but Vern Duncan laced a double to plate Meyer with the game’s first run.

Baltimore added another run in the fifth, a rally started again by the pitcher, Bailey, who singled. Meyer “was safe for the second time on a bobble by Esmond.” After third baseman Bill McKechnie stepped on the bag to force out Bailey on a grounder by Knabe, Duncan knocked in his second run with a single to center.16 The Terrapins led, 2-0.

Newark drew even in the bottom of the fifth when Scheer walked and Bill Rariden singled to left-center, with Scheer advancing to third and drawing a wild throw from Duncan, the Terrapins’ center fielder. When the ball got past third baseman Jimmy Walsh and went into the crowd, Scheer scored and Rariden was placed on third. Knabe apparently argued the call, because, the New York Times noted, “Umpire Jim] Johnstone consumed about ten minutes getting this fact through Knabe’s ‘noodle.’”17 Falkenberg followed with a single to bring home Rariden and tie the game.

That was all the Peppers could manage off Bailey, however. He went the distance, allowing six hits and striking out two, but walking six. He picked off two runners at first base.

Falkenberg kept it tied into the eighth, when Knabe reached on another Esmond miscue before being forced at second on Duncan’s grounder. Guy Zinn grounded out to first, with Duncan taking second, then Harry Swacina delivered a two-out single to center to score Duncan for a 3-2 lead.

Baltimore added three more in the ninth off Falkenberg, who also pitched a complete game. Yip Owens and Bailey started the inning with singles, and Meyer sacrificed them to second and third. Knabe plated Owens on an error by third baseman McKechnie. Then Duncan grounded to Esmond at short and “Bailey beat a faulty throw to the plate.”18 Swacina capped the scoring with a single to drive in Knabe.

Newark got one runner aboard in the ninth on a one-out double by Scheer, but Rariden flied out and Emil Huhn, pinch-hitting for Falkenberg — the only Pepper with two hits — struck out to end the game.19

Despite the loss, the fans enthusiastically welcomed big-league baseball to New Jersey. “The crowd was bubbling over with excess noise, and they turned it loose on every play,” the New York Times reported.20 “The snap and dash displayed by the Knabemen won the favor of the Newark rooters, and the visitors were applauded often by the home fans,” Fitzpatrick wrote in the Baltimore Evening Sun.21

The Federal League wouldn’t last past 1915, but for at least one day, big-league baseball won over the New Jersey fans.

Thanks to the Newark Public Library for providing the photo at the top of this article. Originally published in the Newark Sunday News, the photo shows the parade of New Jersey baseball teams that were part of the festivities.

Play-by-play details were drawn primarily from three newspaper reports listed in the Notes: The New York Times and the Baltimore Sun and Evening Sun.

16 The report in the New York Times considered this bobble by Esmond a second error, noting a third one later and listing Meyer as 0-for-4 in the game. The Retrosheet and Baseball-Reference box scores, however, show Meyer with one hit and only two errors for Esmond (as well as one for McKechnie). Sporting Life noted, “but for charitable scoring (Esmond) might have been charged with a third costly error, but, in the spirit of the occasion, we gave Meyer a single and let it go at that.” See “Newark Opening,” Sporting Life, April 24, 1915: 10.