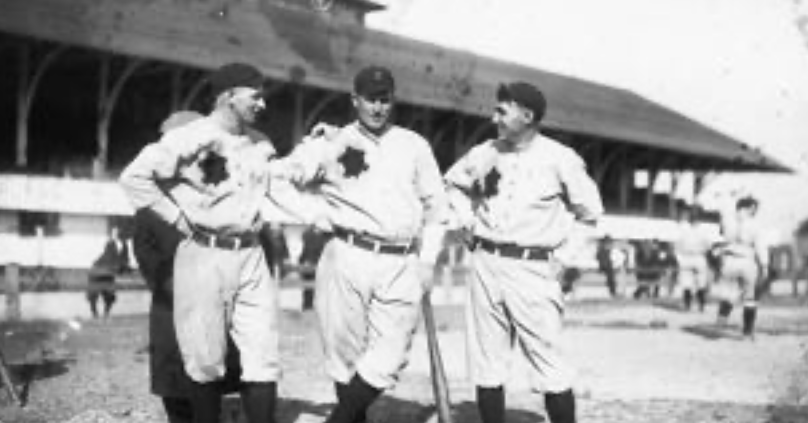 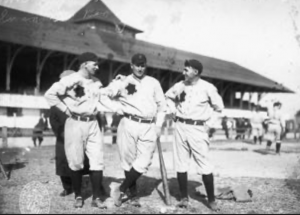 As of September 13, 1907, a total of 2,965 men had played major-league baseball.1 The 2,965th player was Harry “Swats” Swacina. Aside from four seasons in the major leagues, including two in the Federal League, Swacina played in the minor leagues for 21 years.

Harry Joseph Swacina was born on August 22, 1881 in St. Louis. His mother, Anna Swacina, was the head of the household after her husband, Joseph, Swacina died at the age of 53 on November 7, 1896 because of congestion of the lungs, leaving Anna in charge of a household that included four children: Joseph, an engineer; daughters Nellie and Josephine; and young Harry, who was listed as a telephone lineman at the time of the 1900 census.

Swacina served in the US Army during the Spanish American War, then began his  career in professional baseball in 1901 playing with three Southern Association teams, the Memphis Egyptians, the Chattanooga Lookouts, and the New Orleans Pelicans. Between the three teams he played in 89 games where he played with future and former major-league ballplayers Carlton Molesworth and  Jack Wentz of Chattanooga, Jesse Hoffmeister and Stub Smith of New Orleans, and Punch Knoll of Memphis.

Swacina debuted for the Pirates in a game against the St. Louis Cardinals on September 13, 1907, at Exposition Park in Pittsburgh. The 6-foot-2, 190-pound Swacina was a first baseman joining a Pirates team that included future Hall of Famers Fred Clarke, Bill McKechnie, Vic Willis, and Honus Wagner. Wagner was the undisputed star of the team as he led the league with a .350 batting average, the ninth consecutive season he had hit .300 or better. The Pirates had been on a string of fine finishes since 1900, highlighted by three pennants and an appearance in the first-ever World Series in 1903.

In his debut game, which the Pirates won 4-0, Swacina went 2-for-4. His first hit was a single off Cardinal pitcher Arthur Fromme. The Pittsburgh Daily Post commented, “Another youngster made his debut in fast company. Harry Swacina who was secured from Peoria of the Three I League was on hand and stationed at first base by manager Fred Clarke. … Swacina played as though he had been a major leaguer all of his life. … He covered his position in fancy style, and when ‘swats’ were necessary, he used the ‘willow’ with telling effect.”2

Swacina’s first major-league extra-base hit came in his third game, on September 15, a double in an 8-1 Pirates win over the Cardinals. He appeared in 26 games for the Pirates in 1907, hitting .200 in 95 at-bats.

In a July 6, 1908 letter from Barney Dreyfuss of the Pirates to August Herrmann of the Cincinnati Reds, Dreyfuss stated his intention to ask for waivers on Swacina.3 He also spent time in 1908 with the Louisville Colonels of the American Association where he hit .258 in 26 games.

Swacina had a bit of a scare in the early part of 1908 when he sustained an injury to his groin in a series with the Brooklyn Superbas.4 He paid no attention to the injury until he almost swooned in the clubhouse in preparation for a series with the Boston Doves.5 “He will miss about a month and his place at first base will be taken by Jim Kane,” predicted The Sporting News.6 Swacina returned to the lineup on June 21 in a game against the Cincinnati Reds and had a triple in a 5-1 Pittsburgh victory.

Swacina split the 1909 season between the Rock Island Islanders of the Three-I League and the Harrisburg Senators of the Tri-State League, batting .240 in a combined 106 games. He hit .314 for the Mobile Sea Gulls of the Southern Association in 1910 and was back with the Gulls in 1911, batting .294 in 128 games.

In the 1910-1911 offseason Swacina married Jacqueline Blake and they remained a couple until Swacina’s passing.

Swacina was back in the major leagues for the next two seasons, 1914 and 1915, with the Baltimore Terrapins of the upstart Federal League. His first game as a Terrapin was on April 13, a 3-2 Baltimore win over the Buffalo Blues. He was 2-for-4 in the game with a double. There were nearly 28,000 fans at Terrapin Park that day to see the opening game of the season (and the first of the new team’s play).7 A lot of the fans had gathered at the entrance as early as 6 A.M. and they were willing to stay in line to see some baseball.8 Swacina’s second hit of the game, a double, scored Guy Zinn with Baltimore’s first Federal League run and was a start to the three-run inning that ended up ensuring a Baltimore victory.9

Early in the 1914 season Swacina had two consecutive games with three hits, on April 22, a 9-8 win over the Brooklyn Tip-Tops, and on the 23rd, a 4-3 win over the Buffalo Blues. On the 22nd Brooklyn led 7-0 when Swacina opened the bottom of the fifth inning with a single.10 It was the start of a four-run inning that narrowed the gap to 7-4.Broklyn scored a run in the top of the seventh inning to make the score 8-4, and then in the bottom half of the inning Swacina hit a two out single to make it an 8-7 ballgame.

The next day Swacina scored two runs as the Baltimore squad beat the Buffalo Blues, 4-3. With the game tied, 2-2, Swacina led off the fourth inning with a single and took second on a single by Jimmy Walsh. Then a Tom Downeythrowing error on a ground ball by Mickey Doolan led to Swacina scoring the go-ahead run. A single by Fred Jacklitschscored Walsh with an insurance run. That run proved to be important as Buffalo scored a run in the ninth.11

One month to the day later, on May 23, Swacina had a four-hit game against the Chicago Chi-Feds that helped Baltimore to a 7-4 win that gave the Terrapins a six-game lead over the second-place Brooklyn Tip-Tops.

Swacina’s next four-hit game occurred on July 3 against the Pittsburgh Rebels in game one of a doubleheader. In between the game on May 23 and the first game on July 3 Swacina had 16 multi-hit games, (five three-hit games and 11 two-hit efforts). Entering the two games on July 3 he was batting .311 and after the doubleheader his average rose to .332. The Terrapins hit four Pittsburgh pitchers for a total of 30 hits and swept the doubleheader, 7-0 and 9-4.12 In the first game Swacina opened the second inning with a single and, after advancing on a hit by Jimmy Walsh, scored the Terrapins’ first run on Otto Knabe’s single. They added two runs in the second, three in the third, and one in the eighth inning. Swacina had two more hits in the second game.13

Baltimore finished the season in third place with Swacina hitting a career-best .280 with 90 RBIs along with a league-leading 617 at-bats in 158 games.

The 1915 Federal League season saw the Terrapins (47-107) sink to last place, 40 games behind the Chicago Whales. Swacina’s batting average after four games was .188 with just three hits in 16 at-bats. On May 17 against the Whales at Weeghman Park in Chicago, Swacina had four hits in five at-bats as the Terrapins went down to defeat 6-5 in a 10-inning contest. In the fourth inning, according to the Baltimore Sun, “Swacina … got a hold of a pitch from George McConnelland sent the ball high and far to the left corner of the lot. The ball rolled behind the screen that the batters use in practice and the umpires waved Swacina who had already reached third base in with the go-ahead run.”14

In the Chicago eighth, the Whales tied the game after umpire Bill Brennan ruled a Chicago runner safe in what appeared to be a dubious call. According to the Sun, “it was a tough game to lose for the Terrapins who fought the entire game. While we don’t like to hear the umpire alibi, we will have to admit it will be a long time before we hear the name Bill Brennan without the necessity of using smelling salts.15 Swacina’s four hits included the only home run of his Federal League career.

Entering the game on August 26 Swacina was hitting .245. After playing for all of his major-league career at first base, he made his first appearance as a second baseman. Swacina went 1-for-3 in an 11-9 Terrapins loss to the Brooklyn Tip-Tops. Baltimore was down 8-2 in the game and according to the Baltimore Sun, “they staged one of the most thrilling and gamest drives ever shown by a ballclub in the city” to tie the game 8-8 in the ninth inning.16 In the top of the 11th inning, the Tip-Tops scored three runs to take an 11-8 lead. Baltimore’s rally in the bottom of the frame fell short and the Terrapins lost, 11-10. As for Swacina, he played second base without an error. His major-league career shows a .986 fielding percentage for his four years at first base.

His baseball career was not over, though; for the next eight seasons he played in the minor leagues. Out of those final eight professional seasons, his best year was 1920 with the Columbia Comers of the South Atlantic League, when he had 135 hits in 117 games for a .315 batting average. In his final professional season, at the age of 41, Swacina hit .282 in 68 games for the Jackson Senators of the Cotton States League.

Besides his playing career, Swacina managed twice during his career. In 1911 he split the managerial duties of the Mobile Sea Gulls with James Holmes and Matt Kelly as Mobile finished seventh out of the eight teams in the Southern Association. In 1921 he managed the Lakeland Highlanders of the Florida State League along with Joe Wall, Percy Wilder, Bill Zimmerman, and Milton Reed. The team finished in third place 14½ games behind the Orlando Tigers who were managed by Joe Tinker.

As his career wound down, Swacina registered for the World War I draft. He was 37 years old when he registered for the draft and living at 824 South 22nd Street in Birmingham, Alabama. In 1926 he and his wife had moved to 531 10th Avenue South in Birmingham. In 1932 Swacina and his wife were living at 53 S. Conception in Mobile, with his occupation listed as ballplayer. The 1940 census report had him living at 900 South 16th Street in Birmingham and he was listed as a driver. In 1941 Swacina was listed as a peddler.

Swacina died on June 21, 1944, at the age of 62 while residing at 1600 South 16th Street in Birmingham. None of the records found had Swacina and his wife as having any children.

Sources for the biographical detail provided herein include material in the Harry Swacina file maintained at the Giamatti Research Center, National Baseball Hall of Fame and Museum, Cooperstown, New York, Swacina family posts on Ancestry.com as well as BaseballReference.com, Retrosheet.org, and newspaper articles cited below.