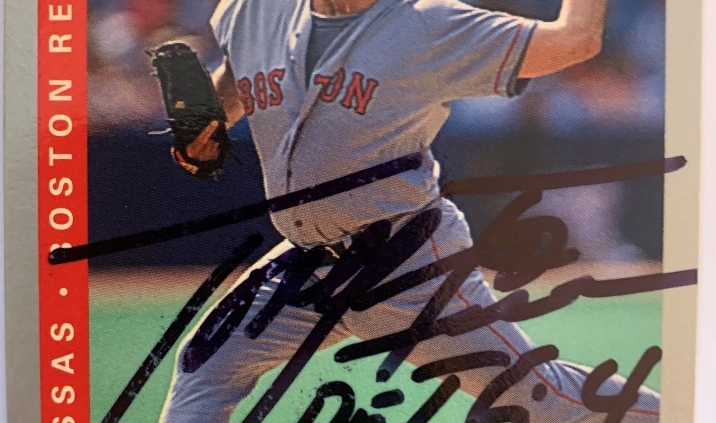 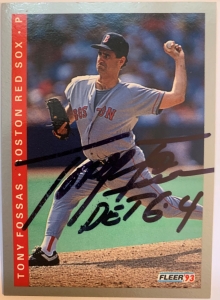 During the heyday of the left-handed relief specialist – sometimes called LOOGYs, for “Lefty One-Out Guys” – Tony Fossas thrived. Armed with a slow side-arm curve he called “the frisbee,” the Cuban-born pitcher appeared in 567 games over 12 major-league seasons between 1988 and 1999.1 He worked only 415⅔ innings in that span, and never made a start.

But before he made his name as a short-duration specialty reliever, Fossas plied his trade as a starting pitcher and swingman for roughly a decade in the minor leagues and the Mexican League. His minor-league credentials include 140 starts, 34 complete games, and 6 shutouts.

Not many baseball fans can say they saw Tony Fossas pitch a shutout. And only 644 people can say they saw his sixth and final whitewash job, which occurred early in the 1986 season at Honolulu’s massive and near-empty Aloha Stadium.2

Fossas, then 28, was pitching for the Edmonton Trappers, a California Angels farm team in the Triple-A Pacific Coast League. He’d signed as a free agent with the Angels in December 1985, looking for a new opportunity after seven seasons in the Texas Rangers organization.3

Manager Winston Llenas’s Trappers were not bound for glory, finishing the season with a 68-73 record. Probably their most notable prospect was speedy outfielder Devon White,4 who had played nine games with California in 1985. White played 17 seasons in the majors, winning three World Series and seven Gold Gloves and making three All-Star teams.

The Trappers’ opponents, the Hawaii Islanders, were in their fourth and final season as a Pittsburgh Pirates affiliate. Manager Tommy Sandt’s club had won the PCL’s South Division the previous season with an 84-59 record but sagged to 65-79 in 1986. Hawaii’s marquee player was a lefty-swinging second-generation outfielder, pegged for stardom, drafted sixth overall in baseball’s June 1985 draft, and making the jump from Class A at age 21. Barry Bonds hit .311 in 44 games with the 1986 Islanders before being called to Pittsburgh at the end of May. In a career that continued through 2007, the future major-league home-run king never again appeared in the minor leagues.

Fossas’s opponent on the mound, Stan Fansler, was a 21-year-old righty from West Virginia whom the Pirates had chosen in the second round of the June 1983 amateur draft. Fansler broke into pro ball in the least auspicious way possible, going 0-10 with an 8.05 ERA with Watertown in the short-season Class A New York-Penn League in 1983. Adding a curveball to his repertoire, he rebounded strongly in 1984 and ’85, posting a combined 10-7 record and 2.96 ERA in 27 games at the Double-A and Triple-A levels in 1985. He showed enough promise with the 1986 Islanders (8-9, 3.63 ERA in 29 games) to earn a call-up to Pittsburgh, where he went 0-3 in five starts. It was the only major-league action of his career.5

Fossas and Fansler had gone head-to-head on April 12, also at Aloha Stadium. Fansler dominated, throwing a complete-game three-hitter and striking out eight in a 5-1 win. According to one report, Fansler’s sinker was working so well that only two balls were hit to the outfield; his infielders and strikeouts accounted for 25 of 27 outs. Fossas lasted five innings, surrendering seven hits and five runs, all earned, to take the loss.6

The rematch could scarcely have gone more differently. After a scoreless first inning, Fansler gave up consecutive singles to designated hitter Rufino Linares, first baseman Mark Ryal, and right fielder Bobby Clark to give Edmonton a 1-0 lead. He then threw wildly to third on a grounder by left fielder Reggie Montgomery, trying unsuccessfully to retire the lead man. This error opened the gates to a 13-batter inning in which Trappers piled up eight runs, seven of them unearned. “When we lose, we lose big,” Sandt said after the game.7

Clark notched two run-scoring singles in the inning on his way to a 2-for-4 night. Linares and Ryal also posted two singles apiece in the frame, and both finished the game 3-for-4.8 Clark, Linares, and Ryal had all previously reached the majors; Ryal was the only one of the three who returned there.

Sandt yanked Fansler during the interminable second inning; the pitcher gave up five hits and eight runs in 1⅔ innings. Ed Farmer, Scott Neal, Dave Leeper, and Ray Krawczyk split pitching duties for the Islanders the rest of the way. They gave up nine more hits and five walks, but only one more run, charged to career minor leaguer Neal in the eighth. Montgomery and catcher Stan Cliburn, who both went 0-for-5, were the only Trappers starters without a hit.

Leeper’s pitching appearance was the first of his professional career. The 26-year-old lefty had pitched in high school but entered the pro game as an outfielder, seeing action in 19 big-league games with the Kansas City Royals in 1984 and 1985. He began the game as Hawaii’s designated hitter, then moved to the mound to take some of the load off the Islanders’ pitching staff. Leeper retired two hitters in the ninth before an injury to his elbow forced him to leave the game.9 He pitched in 42 more minor-league games in 1987 and 1988 but did not return to the majors as a moundsman.10

As for our hero, Fossas scattered eight singles and a walk in a dogged performance, allowing three Islanders to reach third base but none to reach home plate. He retired 11 straight Hawaii batters between the fourth and seventh innings. Much of Hawaii’s offense came from a few players, as left fielder Cecil Espy, shortstop Bob Miscik, and second baseman Ron Wotus11 collected two hits apiece. Bonds and Leeper claimed the other two hits. (As a major leaguer, Bonds went 3-for-13 against Fossas for a .231 average, including five strikeouts, a double, and a home run.)

Manager Llenas said Fossas followed the eternal advice of pitching coaches everywhere: “[He] kept the ball low, pitched strikes, and stayed ahead of the hitters. It was a real good outing.” Fossas, meanwhile, said his shutout wasn’t as easy as it looked: “It is more difficult to pitch a shutout when you have such a big lead. You don’t concentrate that much. But I think I did what I had to do tonight. I was more aggressive.”12 The game ended in 2 hours and 19 minutes.

It would have been a Hollywood ending if Fossas’s shutout triggered his ascent to the major-league success he’d been seeking since he signed with the Rangers in June 1979. Instead, an elbow injury limited him to seven games in 1986 (3-3, 4.57 ERA.13) He worked his way back for 40 games in Edmonton in 1987, including 15 starts, but the Angels granted him free agency after the season.

Fossas signed with Texas yet again for 1988, converted to a full-time reliever, and finally got on track. He compiled a 2.84 ERA across 52 games in Triple A and reached the bigs for the first time at age 30. A variety of achievements large and small followed. He pitched in the postseason with the 1996 St. Louis Cardinals; appeared, albeit briefly, with the 1999 World Series champion New York Yankees;14 and thrice led his teams’ pitching staffs in appearances.15

He also enjoyed an unusual “homecoming” in April 1997, when the Cardinals and San Diego Padres played three regular-season games at Aloha Stadium. Pitching for St. Louis, Fossas threw a perfect ninth inning in the last game – a reminder of all the zeroes he’d put up on the Aloha Stadium scoreboard almost exactly 11 years before.

In addition to the sources cited in the Notes, the author consulted Baseball-Reference.com and Retrosheet.org for general player, team, and season data.

Neither Baseball-Reference nor Retrosheet provides box scores of minor-league games, but the April 18, 1986, edition of the Honolulu Advertiser published a box score.

2 The stadium, used for University of Hawaii football games and formerly for the National Football League’s Pro Bowl, has a commonly quoted capacity of 50,000.

3 Fossas had also been the property of the Chicago Cubs in March and April 1982 but was released without making any regular-season appearances with the Cubs or their minor-league affiliates. The Rangers re-signed him in early May and he resumed his career in their minor-league system.

4 According to Baseball-Reference, White has readopted the original spelling of his name, Devon Whyte, since retiring from baseball.

10 Leeper is not to be confused with Dave Leiper, a full-time pitcher who appeared in 264 games over eight major-league seasons between 1984 and 1996.

13 In July, the Edmonton paper reported that Fossas had gone home to Boston to have his elbow checked out, adding, “It wasn’t getting any better here.” Norm Cowley, “Trapper Belies Pitching Woes,” Edmonton Journal, July 21, 1986: C4.

14 Fossas appeared in five games, worked a single inning, and posted a 36.00 ERA. Needless to say, he was not on the postseason roster.