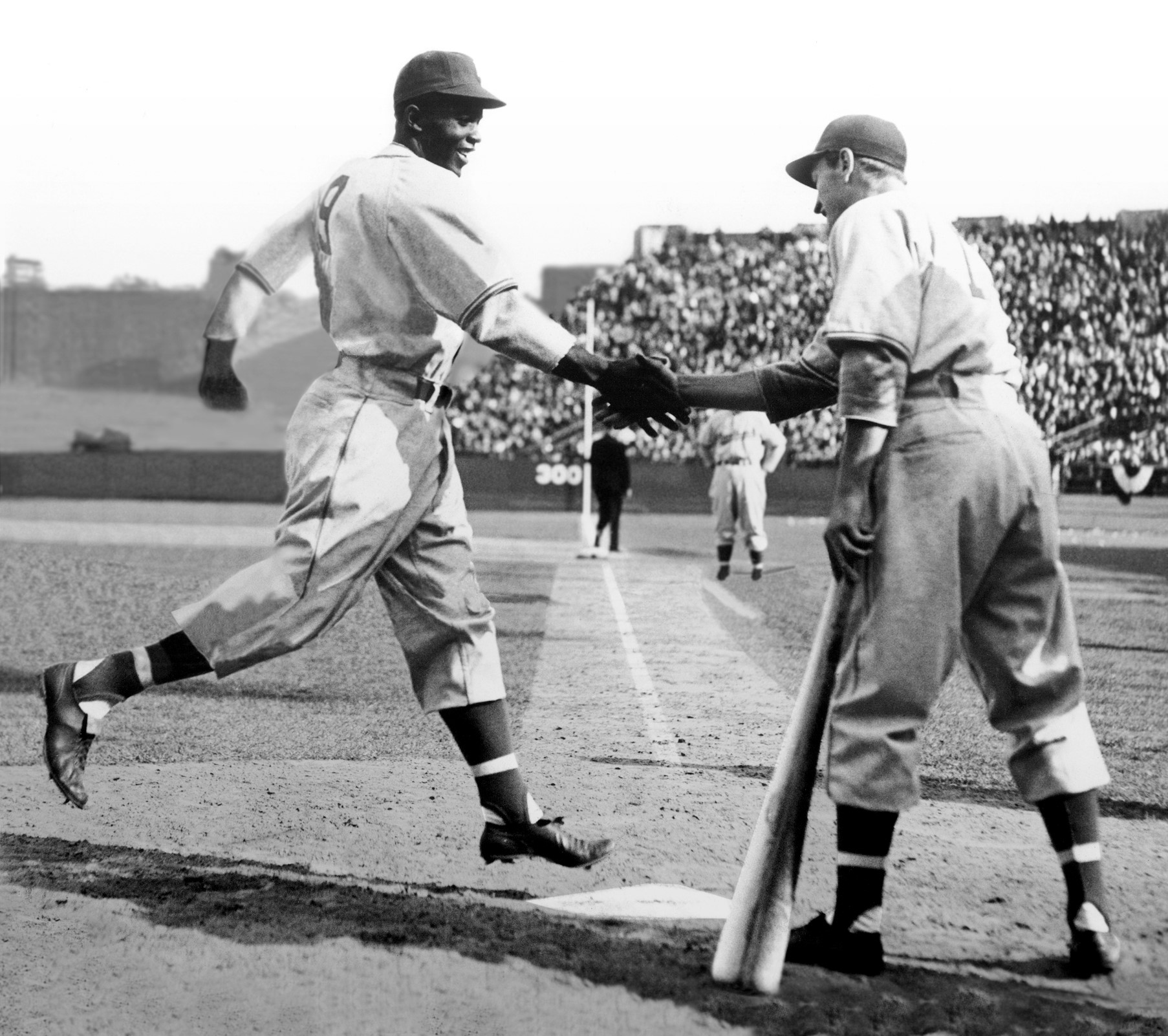 When Jack Roosevelt Robinson went to bat in the top of the first inning on April 18, 1946 — on a field that bore his middle name — he made history as the first Black player in Organized Baseball in the twentieth century.1

Robinson’s performance in the exhibition season had not been noteworthy, so no one expected him to be the driving force in the Montreal Royals’ 14-1 rout of the Jersey City Giants. After he turned in a 4-for-5 day at the plate that included a homer, two stolen bases, four runs scored, and four RBIs, Pittsburgh Courier reporter Wendell Smith rhapsodized that “Jolting Jackie Robinson, the ‘California Comet’ looms tonight (Thursday) as the newest and most spectacular satellite to blaze across the International League baseball heavens in a decade.”2

The excitement and joy that Smith and his fellow Black reporters and fans felt was palpable. Although Robinson was lauded from all corners, with the New York Times reporting that he “converted his opportunity [to make good] into a brilliant personal triumph,” African-Americans knew that Robinson’s accomplishment did not belong to him alone.3 As Smith pointed out, “[t]he hopes of fourteen million Negroes [were] resting on his big broad shoulders.”4 Fellow Courier columnist William G. Nunn asserted, “In tearing the door from its hinges, Robinson proved to 25,000 wild-eyed fans of all hues, races and creeds that ability recognizes no color line!”5 Indeed, Robinson’s performance had been so amazing that he had “won the hearts” of all those fans.6

The fact that it was Opening Day normally would have provided excitement enough, but the added attraction of Robinson’s debut resulted in a paid attendance of 51,872 for a venue that had a capacity of only 25,000. The result was that “[t]he park was practically filled at 1:30 P.M. and when Mayor [Frank] Hague threw out the first ball at 3 P.M. there was not an empty seat in sight.”7 Those fans fortunate enough to gain entrance applauded as Robinson, the second batter of the game, stepped to the plate. Smith observed of the crowd, “They were for him. … They all knew how he had overcome many obstacles in the Deep South. … And yet, through it all, he was standing at the plate as the second baseman of the Montreal Royals. … The applause they gave so willingly was a salute of appreciation and admiration.”8 The fans’ excitement waned briefly when, after working a full count, Robinson grounded out to Giants shortstop Jaime Almendro. Robinson’s grounder was part of a one-two-three inning for Jersey City starter Warren Sandel, but it would be the only successful frame for the Giants hurler.

In the top of the second inning, Tom Tatum singled and Red Durrett followed with a homer for the first two Royals runs. When the third inning rolled around, the Royals went to work on Sandel again. Montreal pitcher Barney DeForge drew a leadoff walk and Marv Rackley followed with a single to set the stage for Robinson’s second at-bat. This time the former Kansas City Monarch, who had ranked “number six in the Negro American League for the league’s batting honors in 1945,” did not disappoint.9 He clouted Sandel’s first pitch over the left-field wall for a three-run homer that gave the Royals a 5-0 lead. Sandel retired the next two batters but was lifted for reliever Phil Oates after he allowed Durrett’s second round-tripper of the game.

Oates ended the third inning and made it through the fourth without incurring further damage, but Robinson showed another aspect to his game when he returned to the plate in the fifth. He dragged a bunt down the third-base line that he beat out handily, stole second base with ease, and advanced to third on an infield out. Robinson promptly sped halfway down the line as though he wanted to steal home. The move so unnerved Oates that he stopped in mid-windup and was called for a balk that allowed Robinson to score.

The only flaw in Robinson’s spectacular debut occurred in the bottom of the fifth when he committed an error while handling his first chance at second base, a miscue that the New York Times humorously chalked up to him “proving that he was only human, after all.”10 First, shortstop Stan Breard made an error on leadoff batter Almendro’s grounder. Robinson made it two Royals errors in a row when he retired Almendro at second but threw wide of first base while trying to turn the double play on Cleston Ray, a miscue that allowed Ray to take second. Ray took third on Bobby Thomson’s second hit of the game and scored the Giants’ lone run on Norman Jaeger’s fly out.11 Robinson atoned for that error by successfully starting the Royals’ only double play of the game in the sixth inning; he handled five of his six total chances successfully with two putouts and three assists.

In the seventh, Robinson’s third hit of the day — a solid single to right field — and second stolen base were part of another Royals onslaught that plated three runs and made the score 10-1. Hub Andrews took the mound for the Giants in the eighth inning, but he fared no better than either of his predecessors; in fact, he followed directly in Oates’s footsteps. The Royals put up another three-spot in the eighth, including Robinson’s fourth run of the game. Robinson reached base with his second bunt of the afternoon, again down the third-base line, and advanced to third via two infield outs. The Baltimore Afro-American described how

a]gain he took advantage of the psychological factor his base-running prowess had established. As Andrews began his wind-up, Jackie stormed down the base-line toward home plate, then suddenly stopped.

The bewildered Jersey City pitcher didn’t know what to do with the ball and again [home plate] Umpire Gore called Jackie across the plate.12

That was two pitchers, two fake steal attempts, and two balks that allowed two of Robinson’s runs to score, which Wendell Smith believed to be “some kind of a record for an opening day game.”13

Although Robinson’s splashy debut was the obvious story of the day, he did not beat the Giants single-handedly. DeForge pitched masterfully. The Jersey City native scattered eight hits in a complete-game effort against his hometown team and would have thrown a shutout had it not been for the Breard and Robinson errors. Royals batters smashed 15 hits, including Durrett’s two homers and three-hit performances by Tatum and Breard. Montreal was off and running in a 1946 season that would lead to an International League batting title for Robinson and a Little World Series victory for the team.

On this day, when the game ended, Robinson was mobbed by kids who had a new idol and wanted his autograph or merely to come into contact with him. Durrett “fought his way through the howling mob and finally ‘saved’ Robinson,” telling him, “You can’t possibly sign autographs for all those kids.”14 Once Robinson arrived in the visitors locker room, the scene was no different as reporters and well-wishers crowded around the star of the day. Things were so hectic and “Robinson was so excited he had to tie his necktie three or four times but he was as happy as a kid on Christmas morning.”15

The Jersey Journal, hometown newspaper of the vanquished Giants, lauded Robinson and made note of the fact that the momentous occasion would not have been possible had Branch Rickey not been courageous enough to sign Robinson and had he not “stood staunchly behind [him] and permitted pre-season exhibition games to be cancelled rather than back down” and avowed that “[y]esterday, Robinson repaid him for his support.”16 The Pittsburgh Courier’s William G. Nunn agreed, proclaiming, “But as twilight deepens over this ball park … as the American flag waves proudly in the glooming sic], we bow our heads in silent tribute to two men who opened another saga in the book which is America. … [T]wo men with faith in God and Democracy. Thank God for a Branch Rickey and thank America for Jackie Robinson.”17

As for Robinson himself, in the postgame locker room, he commented, “The one thing that I cared about was the way my teammates backed me up all the way. […] There wasn’t any riding out there but if there was I wouldn’t have minded as long as my team was behind me. They have been swell.”18 After the postgame clamor ended, [a]s he left the park and walked out onto the street, the once brilliant sun was fading slowly in the distant western skies. … His petite and dainty little wife greeted him warmly and kindly. ‘You’ve had quite a day, little man,’ she said sweetly. ‘Yes,’ he said softly and pleasantly, ‘God has been good to me today!’”19

1 Roosevelt Stadium was, of course, named after President Franklin Delano Roosevelt, but it seems fitting that Robinson shared the name. The International League had previous African-American players, but none since Moses Fleetwood Walker played for the Syracuse Stars in 1889 prior to Black players’ exclusion from Organized Baseball due to the “gentleman’s agreement” between all team owners.

11 Bobby Thomson later became famous for his “Shot Heard ’Round the World” in 1951 that won the National League pennant for the Giants in their playoff series against the Dodgers.

16 “The Club-House: Jackie Robinson, Despite Pressure on Him, Rose to Greatest Heights in Athletic Career at Inaugural Here,” Jersey Journal, April 19, 1946: 13.