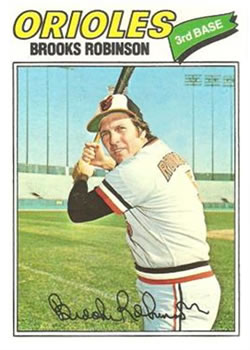 Entering the 1977 season, expectations were low for the Baltimore Orioles. After they won 88 games the season before and finished second behind the pennant-winning Yankees, many experts were picking the Orioles to finish in the lower half of the American League East. The lowered expectations were primarily due to major-league baseball’s first year of free agency and the Orioles’ subsequent loss of key players Reggie Jackson, Bobby Grich, and 20-game winner Wayne Garland.

On the evening of Tuesday, April 19, 1977, the Cleveland Indians entered Memorial Stadium for the middle game of a three-game series with both clubs having 4-4 records.

The starting pitcher for the Orioles was Mike Flanagan, making his first start of the year, while the Indians countered with Dennis Eckersley, who was making his third start of the young season.

The game was scoreless until the top of the third inning, when Indians catcher Ray Fosse led off with his first home run of the season. The Orioles tied the game in the bottom of the inning when right fielder Ken Singleton singled to center field, driving in second baseman Billy Smith, who had doubled.

The Orioles broke the tie in the fourth, scoring an unearned run off Eckersley. With one out, first baseman Lee May doubled. Center fielder Larry Harlow reached base on a fielding error by Indians second baseman Duane Kuiper, moving May to third. May then scored on catcher Rick Dempsey’s sacrifice fly to right.

Kuiper atoned for his fielding miscue the next inning when he executed a successful suicide squeeze bunt to bring in Fosse, who had led off the inning with a single and moved to third on a hit to center field by shortstop Frank Duffy.

Due to strong pitching efforts by both Flanagan and Eckersley (and the Indians’ Dave LaRoche, who pitched the ninth), the game remained tied at 2-2 after regulation play.

The Orioles brought in left-hander Tippy Martinez, in his first appearance of the season, to pitch the top of the 10th inning. He encountered problems immediately when the first batter he faced, right fielder Charlie Spikes, doubled. After Fosse struck out, light-hitting Frank Duffy tripled to right, scoring Spikes to give Cleveland the lead. Martinez’s trouble continued when he walked center fielder Rick Manning and then faced pinch-hitter Larvell Blanks, who lined a ball off Martinez’s ankle for an infield hit, allowing Duffy to score.

Manager Earl Weaver replaced Martinez with right-handed Dyar Miller, who got himself in his own trouble by walking pinch-hitter Jim Norris to load the bases. Veteran DH Rico Carty, who had been held hitless up to this point, struck an RBI single to right that scored Manning and extended the Indians’ lead to 5-2. Miller struck out the next two batters, left fielder Buddy Bell and first baseman Andre Thornton, to escape further damage.

Going into the bottom of the 10th, the Indians stayed with LaRoche in hopes of shutting down the Orioles and earning him his third win of the still-young season.

LaRoche had set the Orioles down in order in the ninth (two by strikeouts), but ran into problems in the 10th. Ken Singleton led off with a base hit to center, and LaRoche walked third baseman Doug DeCinces. LaRoche struck out rookie DH Eddie Murray, earning himself temporary relief. That relief was indeed temporary as Lee May singled to left field, scoring Singleton from second and bringing the Orioles to within a run of a tie.

Orioles rookie Harlow was the next scheduled hitter, but Weaver instead sent up Brooks Robinson as a pinch-hitter. Robinson was 39 years old and in his 23rd season with the Orioles (working as a player-coach.) It was only his third plate appearance of the season.

Indians manager (and former Orioles teammate) Frank Robinson went out for a mound visit with LaRoche to see if he wanted to pitch to Brooks. It was decided that the left-handed LaRoche would pitch to the right-handed-hitting Robinson.

In front of a crowd that was by then somewhat less than the announced 4,826, Brooks strode up to the plate. Bill Tanton of Baltimore’s Evening Sun reported, “As Brooks dug in to face reliever Dave LaRoche, a chant went up in the grandstand near third base: ‘Let’s Go, Brooks, Let’s Go, Brooks.’”2

Robinson worked the count to 3-and-2 and after fouling off several offerings from LaRoche, he made solid contact with a belt-high fastball and connected for a home run that landed about seven rows deep in the left-field bleachers. The Orioles dugout merrily emptied to greet a grinning Robinson as he approached home plate after providing the Orioles and their fans with an exciting 6-5 walk-off victory.3

“This was my biggest thrill in a long time,” Robinson said after the game. “It’s a day-to-day thing for me. I was lucky to get a contract this year.”4

“An emotional moment?” laughed Earl Weaver. “It’s gotta be. I’m only sorry I’ve been around here for the last 10 years. He’s been doing things like that for the last 20.”5

Dave LaRoche was traded to the Angels within a month of the game, Indians manager Frank Robinson was fired would in June, and the Orioles – despite their losses in free agency –surprised a lot of people by winning 97 games in 1977, finishing once again in second place, only 2½ games behind the eventual World Series champion New York Yankees.

As for Brooks Robinson, he only had 49 more plate appearances after the April 19 game, with only six hits, before retiring as a player and becoming a full-time coach on August 21 to make room for Rick Dempsey, who was coming off the disabled list.6

Brooks Robinson homered for the first time late in the 1956 season off Washington Senators pitcher Evelio Hernandez. The home run he hit on April 19, 1977, was his 268th and last (and possibly most improbable) of his illustrious Hall of Fame career.

Perhaps the entire game of April 19 (and Robinson’s career) could be summed up by someone mentioning to him during the postgame locker-room celebration that he looked “like a kid out there tonight” and with the future Hall of Famer responding, “I feel like a kid every time I put this uniform on.”7

In addition to the sources cited in the Notes, the author utilized Baseball-Reference.com for box scores and player, team, and season pages as well as the game’s pitching chart kept by the Orioles’ Scott McGregor.

3 The game-winning home run can be seen at youtube.com/watch?v=QWpMNiQn6ZI.