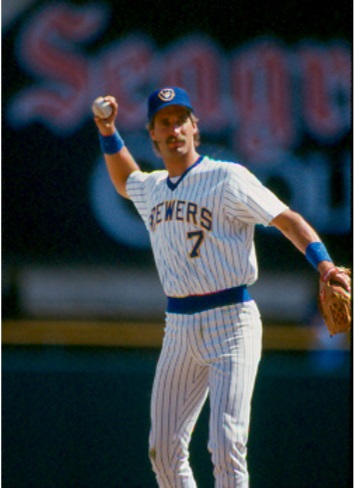 They ended up being called Team Streak. For 13 games to start the 1987 season, the Milwaukee Brewers were unbeatable.

The streak almost ended at 11 games, when the Brewers fell behind the Texas Rangers on Easter Sunday, April 19, by a 4-1 score. But behind clutch home runs by Rob Deer and Dale Sveum, the Brewers pulled out a 6-4 win to keep the streak alive.1

Up until that Sunday game, Milwaukee already had done some remarkable things while building the winning streak. Juan Nieves pitched a no-hitter against Baltimore. Deer and Paul Molitor each had three hits in one game against the Orioles. Teddy Higuera struck out 12 batters in a win that pushed the streak to 10 games.

All these performances and more had the Brewers’ fans truly fanatic by the time Easter Sunday rolled around. It was an exceptional weather day, with temperatures climbing into the 70s. Because the pregame sales for a game that early in the season were not that high, the start of the game had to be delayed because so many fans wanted tickets as walkups. Mario Ziino described the scene at County Stadium in his Brewers Almanac in Brewers Game Day, the club’s program:

“For over 40 years, a local restaurant [George Webb’s] promised to serve free hamburgers when the home team won 12 straight games. To most fans, that day of reckoning had finally arrived. Shouts of ‘George Webb’ echoed throughout County Stadium’s parking lot on a warm Easter Sunday.

“ ‘It truly was an enjoyable experience,’ Molitor said. ‘We went out there and just enjoyed the way we were playing without feeling the pressure compared to the World Series of 1982 when we were heading down the stretch and every game meant a little bit more because we were coming so close to possibly playing in the post-season.’

“While fans paraded around the ballpark with banners that read: ‘162-0,’ the law of average had to be on the side of the Rangers.”2

It certainly looked as though the law was being applied by the Rangers. Jose Guzman started for Texas and held the Brewers to one run through 5⅔ innings. Mitch Williams then relieved Guzman and struck out the side in the eighth.

The County Stadium crowd of 29,357 wasn’t giving up. Almost in unison, the sellout crowd rose to its collective feet and wildly cheered the Brewers as they came off the field for their last at-bat in the bottom of the ninth.

“No one would admit it but after eight innings of having the bat shoved up our butts, we kind of thought that the streak, as sweet as it was, would end,” admitted Sveum. “We just couldn’t get any hits that day. But let me tell ya, we all sensed something when we came off the field after the top of the ninth. When we heard and saw that crowd stand and applaud as we came to bat in the bottom of the inning, it turned a dead team feeling into, whoa! We can do this.”3

Catcher Bill Schroeder said the enthusiasm of the crowd was contagious: “Think about it. We’re down 4-1 in the ninth. Texas’ pitching was tough on us. I believe Mitch Williams had just struck out the side in the eighth, and these people are cheering us on.”4

Glenn Braggs walked and Greg Brock singled to start the inning. After Cecil Cooper flied out, Texas manager Bobby Valentine relieved Williams with Greg Harris, a right-hander. He was playing the percentages against Deer, who had homered earlier in the game.

Harris threw two fastballs past Deer, who seemed destined to suffer another of his rather frequent strikeouts. But Harris hung the next pitch, and Deer launched a towering home run to left field.

“He (Harris) hangs a big curve ball and Robbie crushes it into the teeth of a stiff wind for a three-run homer,” Schroeder recalled. “Now, we’re back in it and the crowd is going nuts.”5

After B.J. Surhoff whiffed for the second out, Jim Gantner followed by working Harris for a walk. Sveum came to the plate.

“I guess, I’ll always be remembered for that at-bat in Milwaukee,” Sveum chuckled. “It was a special time in the city and certainly a special time for me. Certainly things have to fall into place. I remember only one pitch in that entire at-bat. He tried to throw me a backdoor cutter right down the middle of the plate on a three-two pitch. I put a good swing on it and it sailed out of the ballpark. I knew it was gone the minute I put a swing on it. I remember throwing my arms up in the air. Coming around first I did a fist pump. I don’t remember much going around the bases from there. It was so surreal until the reception at home plate. The mob at the plate swallowed me and all I wanted to do was touch home plate.”6

Gantner, a veteran of the 1982 American League pennant winner, recalled his reaction to Sveum’s homer. “I just took off,” he said. “I figured if it’s off the wall, I’m going to try to score from first base. I didn’t see it go out. When I came around second I saw the umpire waving his finger for a home run. I said ‘Oh my gosh!’”7

Ziino described the scene in that Game Day feature: “The crowd of 29,357 was whipped into a frenzy. Huge stuffed rabbits popped up in the stands dancing on the shoulders of patrons. Egg hunts around town were put on hold. Family brunch was interrupted by Bob Uecker’s voice blaring on the radio in the background. As the baseball rattled around in the Brewers’ bullpen, County Stadium rocked. From Milwaukee to Pewaukee and Random Lake to Lake Geneva, all you could hear was Uecker’s call, ‘12 in a row. Do you believe it?’ ”8

The game received extensive national media coverage. USA Today featured it as the main story on its sports page as well as a Page 1 story. Many other media, broadcast and print, featured the game.9

George Webb’s gladly doled out the free hamburgers the next day — more than 168,000 of them. Hundreds of Brewers fans boarded buses and trains, and started driving south on I-94 to Comiskey Park.

The Brewers extended the streak to 13 games that night. Robin Yount and Paul Molitor, as they did many times during their long careers with the Brewers, delivered the key RBI hits in that 5-4 win.

It ended the next night with a loss, but the drama of that streak, and especially the Easter Day comeback, would stick with Brewers fans for a long time.

The Brewers went on to a 17-1 start and a 20-3 record to equal the 1981 Oakland A’s for the best start in American League history.

The winning streak wasn’t the only reason the club was tabbed Team Streak. In May the club lost 12 straight. Later in the season, Molitor had a 39-game hitting streak. Higuera had three straight shutouts and a 32-inning scoreless streak.

Sveum recalled the Easter Day game years later: “It’s the most exciting game that I’ve ever played in,” he said. “I’ve been with teams that have won World Series, but obviously to single out a particular game of my career in Milwaukee; it’d have to be that one.”11

1 Gregg Hoffmann, Down in the Valley The History of Milwaukee County Stadium (Milwaukee: Milwaukee Brewers and Milwaukee Journal Sentinel, 2000), 197.