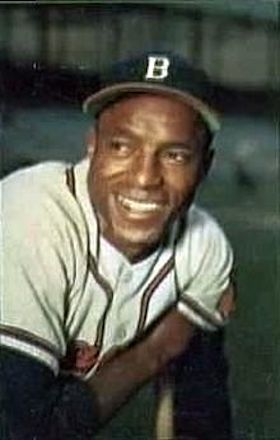 More than nine years before Pumpsie Green first played for the Boston Red Sox – the last team in baseball to desegregate – Sam Jethroe played for Boston’s first major-league team, the Boston Braves. Jethroe’s first two games were on the road, against the Giants at the Polo Grounds, on April 18 and 19, 1950. He was 2-for-4 with a home run and two RBIs in his big-league debut.

His first appearance in Boston was in a City Series exhibition game at Braves Field on April 15. He went 2-for-4, scored one run, and drove in one run. He also played in the next day’s game at Fenway Park, in a game – albeit an exhibition game – at the same park and on the fifth anniversary of the April 16, 1945 date when he and Jackie Robinson and Marvin Williams had tried out for the Red Sox in 1945.1

Jethroe’s first regular-season game in Boston came on April 21. Considering that Jethroe playing at Braves Field represented the first integration of either of Boston’s two teams, there was very little mention of race in the Boston newspapers leading up to the game.2 The Boston Post devoted a preview to the team’s home opener on April 21, but it contained just two sentences referring to Jethroe, neither of them noting his race. The Boston Herald‘s preview just noted, “Sid Gordon … Sam Jethroe, and Willard Marshall in the outfield.” The Boston Globe had a 20-paragraph story by Clif Keane on how the rookie Jethroe’s home run in New York had dispelled some of his butterflies; there was not a word hinting at race. Nor did Harold Kaese’s preview. The Globe‘s Jack Barry mentioned Jethroe in passing as “the Negro star.” And the Boston Traveler suggested that “Sam Jethroe’s Boston debut in a championship game vies for attention at the Braves opener with the return of Eddie Waitkus to major league action.”3 In the eighth paragraph, the Traveler noted that Jethroe was “the first Negro Boston regular.”

Braves Field fans were excited to get a look at “Jet-Propelled Jethroe” – in 1949, he had set an International League record with 89 stolen bases for Montreal.

Manager Billy Southworth selected Vern Bickford as his starting pitcher for the April 21 game. The Braves had won the pennant in 1948, but plunged to a 75-79 fourth-place finish in 1949, 22 games behind the Brooklyn Dodgers. Southworth was, of course, hoping for a better showing in 1950 and the Braves had won both games against the Giants. The visiting Philadelphia Phillies were on the rise. Eddie Sawyer had taken over as skipper for the last third of the 1948 season, which had seen them 66-88, in sixth place. In 1949 they’d climbed over the Braves into third place, six games ahead of them in National League standings. The Phillies were 1-1 coming into Boston. Sawyer started lefty Ken Heintzelman.

Phils leadoff batter Richie Ashburn singled to center and then Granny Hamner singled on a roller to third base. After Eddie Waitkus fouled out to the catcher, Del Ennis “plunked a single into short right”4 and both baserunners advanced two bases, Ashburn scoring. Willie Jones flied out to second, but Dick Sisler drove in Hamner with a single to right, getting cut down himself for the third out while trying to take second base. Still, the Phillies had a quick 2-0 lead. In the bottom of the inning the Braves couldn’t get the ball out of the infield, going down 1-2-3.

After the first inning, Bickford settled down and allowed only three more hits in the game. He didn’t walk a batter until the eighth – a walk that doesn’t show up in any box scores.

The Braves scored one run in the bottom of the second, thanks to a walk worked by Sid Gordon and then a two-out balk that moved him to second. Del Crandall struck a “clean single to center,”5 and it was Phillies 2, Braves 1.

In the bottom of the fifth the Braves got one more, tying the game. With one out, Crandall singled over the second-base bag and into center field, and shortstop Buddy Kerr doubled him home with a drive off the fence in left field, even taking third on Hamner’s errant throw to the plate – but there he languished.

The Phils failed to score in the top of the eighth. In the bottom of the inning, with the Braves’ Connie Ryan at the plate pinch-hitting for Bickford, and with a 3-and-2 count on him, play was halted by plate umpire Lon Warneke. It had been raining for an inning and a half. After a 44-minute delay, removing the infield tarpaulin deposited “hundreds of gallons of water in short right field”6 and the grounds were deemed too soggy for the game to continue. The score reverted to where it had stood at the end of seven and the game went into the books a 2-2 tie. Thus, the batter Bickford had walked in the top of the eighth was no longer part of the official record.

After the game, fellow pitcher Warren Spahn lamented, referring to the back-to-back complete-game wins that he and Johnny Sain had in the season’s first two games, “Bick pitched a much better game than Sain or I and gets no credit for it. Except from the fans, teammates, writers, and Southworth.”7 Jethroe had been 1-for-3, a single with two outs in the third inning, thrown out trying to stretch it to a double. The hit was noted by the several Boston dailies, but no particular crowd reaction was reported. Heintzelman had given up only five hits – Jethroe’s, the two by Crandall, Kerr’s double, and a single by Bickford to open the third (he was shortly erased on a double-play ball hit by Ryan). In the seventh Bickford slashed a line drive down the left-field line, but it was about 12 inches foul – and he wound up popping up to second baseman Mike Goliat.

There had been a bit of thunder and lightning and even a very brief snow flurry at one point. The threatening weather had kept the paid crowd to 7,308, though the Post estimated that over 10,000 in all came to Braves Field, what with all the various dignitaries. Governor Paul A. Dever had thrown out the first pitch. Mayor John B. Hynes was there, as well as the governors of Rhode Island and New Hampshire. A contingent of Marines saw to the raising of the flag, and the music was provided not by The Three Troubadours, who had previously regaled Braves fans, but by John Kiley playing an electric organ that had been installed “in the photographers’ cage under the third-base roof.”8

The game itself was replayed at a later time and did not go into the books as a tie, but all individual stats remain a part of baseball’s historical record.

Not one of the game stories in Boston’s three newspapers mentioned Jethroe’s race.

In 1950 Jethroe led the league with 35 stolen bases, more than double those of second-place finisher Pee Wee Reese. He scored an even 100 runs and won the National League Rookie of the Year award.

1 The trio reported never having heard a word from the Red Sox after what has widely been termed a “sham tryout.” See several articles on the subject in Bill Nowlin, ed., Pumpsie and Progress: The Red Sox, Race, and Redemption (Burlington, Massachusetts: Rounder Books, 2010).

2 Readers knew of Jethroe’s race, dating at least from the time of his acquisition from the Dodgers and from coverage of spring training, but even then mentions in the Boston papers were notably sparse.

3 Boston Traveler, April 21, 1950. Waitkus came from Cambridge, Massachusetts, and had been shot by a crazed female fan, a story later fictionalized into part of the book and movie The Natural.