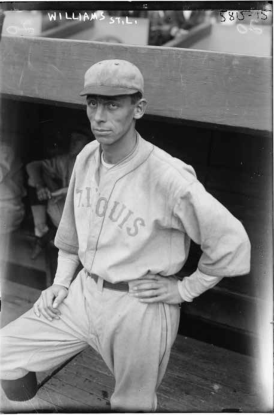 The doormats of the American League, also known as the St. Louis Browns, were making their way northward in the AL standings. In 1918 and 1919 they finished in fifth place. In 1920 they inched up to fourth. And when the curtain came down on the 1921 season the Browns were looking up at only New York and Cleveland in the junior circuit. Though they finished 17½ games off the pace, and just 1½ games ahead of the fourth-place Senators, it would be hard not to notice that the Browns were putting together quite a ballclub.

A capsule look at the Browns in 1921 shows that George Sisler led the team in batting with an astounding .371 average. Gentleman George led the league in stolen bases (35) and tied with teammate Jack Tobin for the league-best in triples (18). The hard-hitting outfield was Tobin in right field and “Baby Doll” Jacobson in center, who both hit .352, and left fielder Ken Williams, who batted .347 and led the Browns in home runs (24) and RBIs (117). Catcher Hank Severeid (.324) and third baseman Frank Ellerbe (.288) contributed to the offensive firepower. The team’s .303 batting average was third in the league. On the mound, Urban Shocker led the league with 27 wins.

But would the Browns, and the rest of the American League for that matter, have enough heft to knock off New York in 1922? Indeed, the Browns and their AL brethren caught a big break as the season got under way. After the 1921 World Series, won by the New York Giants over the Yankees, Bob Meusel and Babe Ruth took part in a barnstorming tour. This was a common practice among players of the day to earn extra money during the offseason. However, members of the teams that played in the World Series were forbidden to barnstorm. Commissioner Kenesaw M. Landis fined Meusel and Ruth $3,362 apiece, which equaled the players’ shares from the World Series. In addition, each player was suspended for the first six weeks of the 1922 season. The Yankees would have to make do without their star players until May 20. The Yankees would still be a formidable foe to their opponents. But perhaps they were just a little less intimidating.

On April 22, 1922, the Browns hosted the Chicago White Sox at Sportsman’s Park. On the mound for the hometown heroes was Dixie Davis. The right-handed hurler won 18 games in 1920 and 16 in 1921. He also led the league in walks both years as well. It would not be going out on a limb to say that Davis’s lack of control was his Achilles’ heel. On the hill for the White Sox was José Acosta. The Havana native spent much of his career as a relief pitcher and spot starter. After posting identical 5-4 records for Washington in 1920 and 1921, Acosta was sent to the Philadelphia Athletics with Bing Miller in exchange for Joe Dugan. Then Philadelphia sold Acosta to Chicago. The starting assignment would be the only one of the season for the diminutive Acosta (5-feet-6, 134 pounds).

Tobin led off the home half of the first inning with a walk. Browns manager Lee Fohl put the sacrifice on and Ellerbe bunted back to the mound. Tobin checked into second base. Sisler followed with a single that plated Tobin. Then Williams came to the plate and launched a home run that cleared the bleacher seats and landed on Grand Avenue. The two-run blast was the left fielder’s first round-tripper of the season, and after one inning, the Browns had jumped out to a 3-0 advantage.

That lead held until the sixth inning. True to form, Davis had yielded four walks in the first five innings, but so far had surrendered only one base hit. He was the beneficiary of two double plays that nullified Chicago threats. Acosta righted himself after the first frame, keeping the three-run deficit a manageable one.

But in the top of the sixth inning, the White Sox put two on base, on an error by Browns shortstop Wally Gerber and a walk to Eddie Collins. Harry Hooper, the former Red Sox star and future member of the Hall of Fame, deposited a Davis pitch into the right-field seats to tie the game at three.

But the Browns answered immediately when Sisler led off the bottom of the frame with a single to center field and Williams followed with his second homer. This time, the home run was of the line-drive variety. But the Browns were not done, as a single by Severeid was followed by back-to-back doubles by Gerber and Marty McManus. The Browns were in front 7-3 and Acosta’s afternoon was over.

With two outs in the bottom of the seventh, Sisler again reached base with a single to left off reliever Lum Davenport. Sisler stole second base, and went to third on a throwing error by Chicago catcher Ray Schalk. Williams followed with a mighty clout into the right-field stands to set a new American League record with three home runs in a game.

St. Louis scored an unearned run in the bottom of the eighth inning, and with a 10-3 lead in hand, the Browns looked to be on Easy Street. Not so fast, as the top of the ninth inning proved to be quite adventurous. Davis fell into his old bugaboo of the free pass, and walked the first three batters he faced. With one out, Ernie Johnson singled to right field, and the score became 10-5. After Hervey McClellan popped out to third base, Collins walked to again load the bases. With a 2-and-0 count on Hooper, Fohl finally had seen enough. He removed the starter and summoned Shocker from the bullpen. The old spitballer Shocker was used mostly as a starter and was the ace of Fohl’s staff, but he lost Hooper to make the score 10-6. The walk was charged to Davis, who surrendered a career-high 11 bases on balls in the game. Johnny Mostil followed in the Chicago lineup and Shocker issued him yet another free pass. St. Louis was leading 10-7 and the go-ahead run was coming to the plate, but Bibb Falk ended the suspense, grounding to Gerber, who threw to third base to force Hooper. The Browns won to raise their season record to 5-4.

Attendance at the game was reported at just over 3,000. No doubt they left the park that day following the 1:42 affair happy, and maybe a bit relieved.

But Ken Williams was just getting started. Between April 22 and 29 he smashed nine home runs in seven games. His power surge prompted L.C. Davis of the St. Louis Post-Dispatch to write this tribute to the slugger:

Comparisons between Williams and Babe Ruth began to pour from writers’ pens in national magazines. But Williams refused to buy into the debate. “I have never made any claim that I could equal Babe Ruth as a home-run hitter,” he said. “On the other hand, I know I am not his equal. No player in the game could hope to match Ruth over a full season’s course. I have done my best. But I have never had in mind trying to beat Babe for I know it can’t be done.”2

Ken Williams indeed lived in anonymity when compared to Babe Ruth, or even with some of his teammates on the Browns. The baseball correspondent who covered the St. Louis clubs for The Sporting News illustrated the point with the following anecdote: “A photographer was told to go out and get a picture of Ken Williams swinging at the plate – and the well meaning camera artist proceeded to shoot Bill Jacobson. … Imagine the text and illustration that would have been incident to Babe Ruth hitting three home runs in one ball game! Sporting editors would have wired every syndicate in operation to rush story and photographs. But Ken hits three of them and a photographer on the ground doesn’t even know which is Ken or Bill Jacobson. …”3