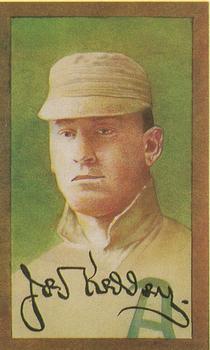 Just about every kid who has ever played baseball has had the dream about coming to bat in the ninth inning with his team down by a run or two and being the hero. The Baltimore Sun described this dramatic game with the same fairy-tale-type approach: “It was the beginning of the ninth inning. Mighty Boston was Baltimore’s adversary and the score was 3 to 1. The three runs belonged to the visitors. Pent-up enthusiasm was at fever-heat and the 8,400 spectators were on the tiptoe of expectation, for it was the Oriole’s [sic] last chance to turn defeat into victory. And they did it.”1 It seemed as if each Orioles batter played the hero, until the Beaneaters just gave up.

The Orioles had just swept three home games from the New York Giants to open the 1894 season. The defending champion Beaneaters had likewise swept the Brooklyn Bridegrooms. (The first game was played in Boston and the next two in Brooklyn.) In this contest, Baltimore, the home team, batted first. Jack Stivetts pitched for Boston and Sadie McMahon for Baltimore. Each pitcher had been the Opening Day victor. According to the Boston Globe, “What promised to end in a well-played game wound up in a burlesque.”2

The first eight innings of the game between these top two contenders were close and exciting. Boston pushed across two runs in the second inning as Tommy Tucker singled, Jimmy Bannon reached on an error, Charlie Ganzel and Stivetts sacrificed the runners, and Bobby Lowe doubled. Baltimore answered with a solo run in the fourth when Joe Kelley singled, stole second, and scored on a single by Heinie Reitz. Stivetts and Lowe hit back-to-back doubles in the seventh inning for another Boston run. Both teams played with purpose and professionalism. The crowd was anxious that their Orioles might lose.

There was some cleverness in the third inning. With one out, Willie Keeler batted with Wilbert Robinson on second and John McGraw on first. Keeler lifted a routine fly ball to left field and the runners stayed near their bases, but left fielder Tommy McCarthy “purposely muffed the ball [and] with lightning quickness he picked it up and sent it to [Billy] Nash, who touched third and threw to Lowe on second” for a double play.3 Beaneaters first baseman Tucker remarked, “That’s a new one on you” to the Baltimore players as he passed them coming off the field.4

And then came the dramatics. According to the Lowell Sun, “Boston showed the white feather in the last inning and allowed Baltimore to win in a canter.”5 The excitement of the ninth inning started when Baltimore’s third-base coach, Boileryard Clarke, in an effort to distract both Stivetts and umpire Tim Hurst, “walked out to the bleachers and raised his hands like a ‘pop concert’ leader, and a volume of sound filled the air, every man, woman and child yelling for all he or she was worth.”6 At first, Stivetts did not seem moved, but “Hurst became rattled at the awful noise.”7 Stivetts pitched to his catcher Ganzel’s mitt, but Hurst kept calling them balls, and the crowd kept getting louder. After Kelley drew a walk, Ganzel “made a vigorous protest”8 and was fined 10 by the umpire. Reitz then stepped into the batter’s box, “holding his bat on his shoulder without the least idea of striking at the ball.”9 He also walked on four straight pitches, at which point Stivett threw his cap to the ground. Hughie Jennings then stroked a single to short center, driving in Kelley. This brought the crowd to its feet. The first three pitches to Robinson were called balls, bringing thunderous roars from the crowd. With the third called ball, Stivetts again “acted like a wild man [and] he threw his cap upon the ground.”10 The Boston team gathered around home plate, offering Stivetts time to compose himself. Umpire Hurst then ordered Stivetts back to the mound. When he didn’t comply, both the Beaneaters hurler and catcher were fined. A moment later, Stivetts was ejected.11

Beaneaters manager Frank Selee brought Kid Nichols on in relief. However, “he was refused the privilege of a little warming-up work by two big policemen, and went in cold and stiff.”12 Nichols threw one pitch, but it was wide, and Robinson trotted to first with an RBI walk. Suddenly the game was tied. Baltimore pitcher McMahon singled past Tucker at first, and two more runs scored. McGraw followed with a single, driving in Robinson. Then, according to the Baltimore Sun, the Beaneaters just quit; “the fielders acted like wooden soldiers when the Baltimore players sent the ball into their territory, and Nichols tossed the ball like a school boy.”13 Keeler singled, plating McMahon and McGraw, and advanced on a wild pitch. Steve Brodie tripled to the right-field fence and Dan Brouthers singled to left. One base hit followed another and the Baltimore squad batted around without making an out, scoring eight times.

Then, as Yogi Berra once said, “It was déjà vu all over again.”14 Kelley and Reitz once again reached via the base on balls. By now, the Baltimore fans were concerned that Boston would refuse to retire the side and the inning would be lost, due to darkness, giving the victory to Boston, so “the Baltimore players were loudly admonished by the spectators to be put out purposely.”15 Jennings popped out to second, but Robinson singled, driving in two more runs. McMahon laid down a sacrifice bunt, advancing Robinson to second, but Reitz held up at third. McGraw drew a walk to load the bases again. Keeler grounded back to Nichols, who threw wildly to first and two more runs came in. Keeler went to second on the error and then stole both third and home. The embarrassment finally ended when Brodie popped out to Nichols on the mound. The Beaneaters did nothing in the bottom of the ninth, making “no effort to get runs.”16

Seventeen Baltimore players had batted in the final frame, scoring 14 runs. Had the Beaneaters batted first, the game could have been decided with a walk-off 4-3 victory for the Orioles. Instead, every Orioles player managed at least one hit and one run scored in the game. McGraw, Kelley, and Robinson led the Orioles offense with three hits each. McMahon pitched a good game, limiting the Beaneaters to three runs on eight hits, with the only strikeout of the game. Lowe shined for Boston with three hits, all doubles. There were eight sacrifices in the game. Amazingly, according to the Baltimore Sun, only four of the Orioles runs were earned.17

The two teams played again each of the next two days. Boston won both games, 6-3 and 13-7. For the season, Boston beat Baltimore eight of 12 matches, but the Beaneaters finished 1894 eight games behind the eventual champion Orioles.

In addition to the sources mentioned in the Notes, the author consulted baseball-reference.com and retrosheet.org. The author sincerely thanks Lisa Tuite of the Boston Globe for her assistance with providing sources.

3 “A Game From Boston: Something Dropped in the Ninth Inning, and Then, Oh, My!”

4 “A Game From Boston: Something Dropped in the Ninth Inning, and Then, Oh, My!”

10 “A Game From Boston: Something Dropped in the Ninth Inning, and Then, Oh, My!”

11 According to the Boston Globe, Boston pitcher Jack Stivetts and umpire Tim Hurst both hailed from Ashland, Pennsylvania. The Globe commented that it was “strange to say that every time that Tim umpires a game where Stivetts is pitching there is always trouble, and the Boston players claim that Mr. Hurst is not particularly stuck on his old townsman.”

13 “A Game From Boston: Something Dropped in the Ninth Inning, and Then, Oh, My!”

14 This Yogiism is attributed to Yogi Berra (date unknown). It is inscribed on the walls of the Yogi Berra Museum & Learning Center, Little Falls, New Jersey.

15 “A Game From Boston: Something Dropped in the Ninth Inning, and Then, Oh, My!”

17 According to the Boston Globe and the Lowell (Massachusetts) Sun, Baltimore had six earned runs.