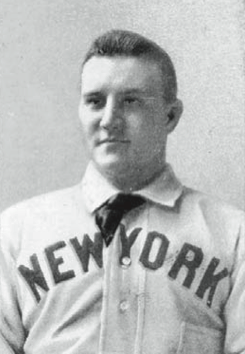 “[W]ith his great right arm in splendid order,” gushed the New York Sun, Amos Rusie “proved beyond a shadow of a doubt that he is still the best pitcher in America.”1 The praise came pouring in for the Hoosier Thunderbolt, making his first appearance on the mound for the New York Giants in more than 18 months. “[H]e is as speedy and his curves and shoots are as deceptive as ever,” cooed the New York Times,2 while the New York Tribune called him the “hero of the game.”3

Rusie was baseball’s biggest star in the 1890s. He captured the nation’s attention with his blazing — indeed legendary — heater, the hardest-thrown ball the sport had ever seen to that point. As a 19-year-old in 1890, he whiffed 341, the first of three straight seasons he struck out at least 300 batters. Coupled with his wildness — he walked at least 200 batters in five straight seasons — the 6-foot-1, 200-pound right-hander made batters literally fear for their lives. He was one of the reasons the distance the from the mound to the plate was extended from 55 feet to 60 feet 6 inches beginning in 1893. Rusie won 30 or more games in four consecutive seasons (1891-1894), and owned a 198-152 career mark in his first seven seasons while playing for primarily average teams.

While at the top of his game in 1895, Rusie was involved in a contentious battle with Giants owner Andrew Freedman, who docked his star pitcher’s salary for alleged rules and playing violations. Rusie protested the fines and threatened to sit out the following season. Not only did the brash hurler make good on his promise, he contacted former ballplayer and attorney John Montgomery Ward to represent him in a legal battle to be freed from his Giants contract. As Charles F. Faber wrote in his biography of Rusie for the SABR BioProject, Freedman paid the hurler $5,000 to drop the suit and re-signed him for the 1897 campaign.4 The entire episode, quipped the Tribune, was an “unnecessary wrangle.”5

Rusie’s season debut created a scene of pandemonium at the Polo Grounds on a Tuesday afternoon despite temperatures in the mid-40s and a “cold bleak wind, which blew a shivering gale,” reported the Evening Star.6 Estimates about the attendance for the 4 P.M. start time ranged from 10,000, according to the Sun,7 to 15,000 from influential Gotham City sportswriter O.P. Caylor.8 The exact number will probably never be known, as “crowds were standing three deep around the ropes surrounding the outfield,” reported the Times.9

To a thunderous ovation, the 26-year-old Rusie set up to face the Washington Senators in the Giants’ fifth game of the season.10 In fairy-tale fashion, the Hoosier Thunderbolt fanned the leadoff hitter, Charlie Abbey, on four pitches and breezed through the first inning, yielding just one baserunner, Kip Selbach, whom he nicked with a pitch.11

The Giants came out swinging against 22-year-old right-hander and offseason medical student Doc McJames, who had posted a 12-20 slate in his first full season a year earlier. Singles by four of the first five batters (George Van Haltren, Mike Tiernan, George Davis, and Kid Gleason) produced a 2-0 Giants lead. The sound of wood on the ball must have excited player-manager Bill Joyce, whose club was winless in its first four games (three losses and a tie) and had been outscored 32-15.

As if the New York crowd was not excited enough, Rusie provided even more fodder to cheer in the second. He fanned the side, setting down John O’Brien, Ed Cartwright, and Tom Brown in order.

The Giants continued to whack McJames, whom the Sun described as “somewhat erratic,” despite his “very fast delivery.”12 A double by Parke Wilson, singles by Rusie and Davis, and a walk produced two more runs in the second. Caylor noted that “Washington put out all three men at the plate” in an action-packed frame.13

Rusie’s appearance seemed to inspire his squad, coming off a seventh-place (64-67) finish in the 12-team National League. “Every man appeared to have some infusion of spirit shot under his epidermis,” mused Caylor,14 while the Sun noted that “players hustled with decidedly more ginger.”15

The Senators mounted a comeback in the third. Charlie Reilly’s single, the first hit off Rusie, McJames’s double, and Rusie’s only two walks of the game resulted in two runs, cutting the Giants’ lead to 4-2. Third baseman George Davis’s muff, one of his two and the team’s five errors, also contributed to the scoring. The Giants’ “fielding was far below the standard,” opined the Sun.16 Only one of the three Senators runs in the game was earned. The Senators tallied their third and final run in the sixth on singles by Brown and Reilly with help from second baseman Gleason’s error.

The Giants were in control throughout the game. They responded to the Senators’ first tallies of the game by tacking on a run in the fifth to make it 5-2. Tiernan doubled and eventually scored on McJames’s error in the inning, which also experienced a wild scene that elicited catcalls and howls from the crowd. With bases loaded, General Stafford hit a grounder on which Jake Beckley collided with shortstop Gene DeMontreville at second base. According to the Sun, umpire Tom Lynch declared Stafford out, claiming that Beckley intentionally prohibited DeMontreville from completing a double play.17 [There are some discrepancies with box scores of this game; some show the Giants scoring one run in the fifth; others show two runs; however, the Sun’s box score and Caylor’s report seem most reliable].

The Giants continued their offensive onslaught in the seventh, scoring two more runs on singles by Bill Joyce, Davis, and Beckley, aided by two passed balls. Lynch’s hard day continued, too. He ruled Davis out at the plate. The Evening Star contended that Davis “wasn’t touched” and furthermore submitted that Lynch was not in position to see that play because “he was inside the diamond and had to guess at it.”18

Rusie himself was at the center of the Giants’ last run. A robust hitter for a pitcher, Rusie entered the season batting .249 in his career. In the eighth, his third hit of the game, coupled with Tiernan’s third safety and DeMontreville’s throwing error, one of the Senators’ four miscues, produced the final score, 8-3. Seven of the Giants’ eight runs were unearned.

Rusie tossed a scoreless ninth to complete the game in 2 hours and 25 minutes. Met with booming applause and standing ovations throughout the game, Rusie was stormed by well-wishers after the game. Some exuberant fans tried to carry him off the field, and only by intervention from his teammates and police was it possible for him to make it to the dressing room. Other fans feted him again once he left the park.

Rusie made a grand return to baseball in 1897. He finished the season with 28 victories, the second-most in the big leagues behind Kid Nichols, leading the Giants (83-48) to a third-place finish. The year away from the sport affected his strikeout totals, though. He finished in fourth place with 135, behind co-leaders McJames and teammate Cy Seymour (156).

10 Play-by-play information for this essay is culled from available newspapers. Neither Baseball-Reference.com nor Retrosheet.org has detailed information on this game.

13 Caylor noted a double by Wilson; other sources credited him with a single.