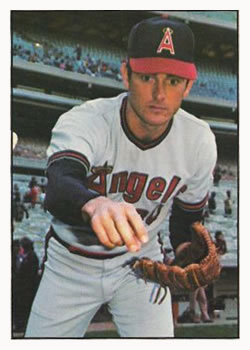 Opening Day is usually a day of optimism, celebration, and a big crowd as fans flock to the ballpark after a long winter without baseball. Those very crowds, however, can overwhelm a team with poor ballpark security. Perhaps the modern nadir in Opening Day crowd control occurred in Chicago on April 5, 1974, when the Chicago White Sox’ opener against the California Angels at Comiskey Park deteriorated into a bacchanal of stripping, streaking, and fighting.

The game was not one of the marquee matchups on Opening Day 1974; both teams were coming off losing seasons in 1973. (The Angels had won 79 games and the White Sox 77.) Of course, fans of both teams found reasons to hope 1974 would be better. The White Sox had stars Dick Allen and Ken Henderson back from injuries suffered the previous season, and had acquired Ron Santo from the crosstown Cubs. The Angels had added two promising rookies in outfielder Mickey Rivers and pitcher Frank Tanana, and had acquired second baseman Denny Doyle and catcher Ellie Rodriguez in trades.

C.C. Johnson Spink, in his season preview in The Sporting News, tabbed the Oakland A’s as heavy favorites to win the American League West Division and the Texas Rangers as all but certain to finish last. The other four teams, including the Angels and White Sox, would “at best, make a race of it for second place in this division.”1

Opening Day 1974 did offer a good pitching matchup pitting fastballer Nolan Ryan for the Angels against knuckleballer Wilbur Wood for the White Sox. Both had pitched well over 300 innings the season before, with Ryan compiling a 21-16 record against Wood’s 24-20.

Play commenced in the early afternoon in front of 30,041 spectators, with a game-time temperature of 37 degrees and a biting north wind. Both pitchers struggled in the early going. Ryan walked two batters in the bottom of the first, and the White Sox eked out a run on a groundball by Carlos May. Wood hit two batters in the top of the second, and the Angels tied the score on a double by Leroy Stanton.

Jorge Orta doubled leading off the bottom of the second, and two more walks by Ryan loaded the bases with one out. Ken Henderson crushed a fly ball to center. White Sox manager Chuck Tanner “thought it was a grand slam” and center fielder Rivers broke back toward the wall.2 Instead the wind took over and the ball landed in medium center field for a single, with one run scoring. Ryan got out of the inning via a double play.

In the bottom of the third, Ryan walked two more batters but was bailed out by newly acquired second baseman Doyle, who made a diving stop of a groundball and flipped to short while on his back for a force out. Through three innings, Ryan had walked six, but the White Sox had left six men on base and led only 2-1.

Ryan and Wood settled down in the fourth and fifth innings, and there was no more scoring, but the action in the stands was just heating up. The commotion began with Ann Marie, a Chicago-area stripper who had made a name for herself over the past year by strolling around local sporting venues and showing off her spectacular bust. Unlike some others as this day went on, Ann Marie remained fully clothed; she was not about to perform her act for free. She began walking around Comiskey Park during the third inning and provided the first extracurricular distraction of the day.3

Then, the “Friday afternoon fights” began among over-served spectators. One newspaper reported over a dozen spectator brawls with a fan removed from the left-field upper deck on a stretcher;4 another noted “young strong men choking each other” with their backs against the guard rail in the upper deck.5 “They took a lot away from the game,” said White Sox third baseman Bill Melton. “It was distracting as hell.”6

On the field, Leroy Stanton tied the game 2-2 with a home run in the sixth inning. As Wood labored in the top of the seventh, walking Bobby Valentine and Frank Robinson, the inevitable streaker appeared.

The streaking craze appears to have originated on Southern college campuses in late 1973 and early 1974. In March 1974 it went nationwide and, to use a latter-day term, went viral. There were streakers everywhere, including at spring-training games and at the Academy Awards on April 2.7 An occurrence on Opening Day was so predictable as to be trite, and sure enough, in the seventh inning, a young man wearing only a bright red White Sox batting helmet entered and pranced around the outfield. After he exited, he realized he had left his helmet on the field and returned to retrieve it, unmolested by security.8

Several other fans, both male and female, disrobed but remained in the stands, and one older gentleman appeared on field in long underwear, out of deference to the cold.

Wilbur Wood eventually gave up a single to Bob Oliver, and Joe Lahoud, running for Valentine, scored to give California a 3-2 lead. Lahoud took over in left field in the bottom of the seventh inning, and came face to face with the final spectator disturbance of the day — bottle tossing. Drunken fans were heaving glass bottles and other debris onto the field.

“(The fans) got upset when I asked the umpires to stop the game so we could clear out the bottles,” said Lahoud. “I didn’t have any choice — I could have broken an ankle if I’d stepped on one of ’em.”9 White Sox pitcher Terry Forster said he was nearly hit by a beer can while throwing in the bullpen and added, “I was afraid for my wife and child up there in the stands.”10

Perhaps Forster’s distraction affected his pitching, as he was completely ineffective when he took the mound in the top of the eighth. He gave up three straight singles and then walked three batters, and the Angels scored five times to break the game open and take an 8-2 lead. The crowd finally thinned out as people left for home or for warmer indoor drinking establishments.

Nolan Ryan pitched through the bottom of the eighth and left the game having given up 10 walks but only four hits and two runs. The 10 walks tied the Angels club record for most given up by a pitcher in a game, set by George Brunet in 1966.11 Dick Selma closed out the game with a scoreless bottom of the ninth for an 8-2 final score.

After the game, most player comments were some variation on, “It was the worst I’ve ever seen.” Tom McCraw, a former White Sox outfielder now playing for the Angels, said prophetically, “After that I don’t see how anybody would want to come out to a game.”12 The White Sox would indeed be plagued by poor attendance through much of the 1970s, and the city of Chicago more than once came close to losing the franchise.

In addition to the Sources cited in the Notes, the author consulted the Baseball-Reference.com and Retrosheet.org websites for pertinent material and the box scores:

3 Jeff Prugh, “Angel Opener Is an Exhibition … by Streaking Chicago Fans,” Los Angeles Times, April 6, 1974: 50. The Chicago Tribune spelled her name Anne Marie and placed her perambulation in the sixth inning; there may have been more than one.

11 Prugh. He wrote that the record was for walks in a nine-inning game but in fact Brunet pitched into the 10th inning and walked a batter in that inning.