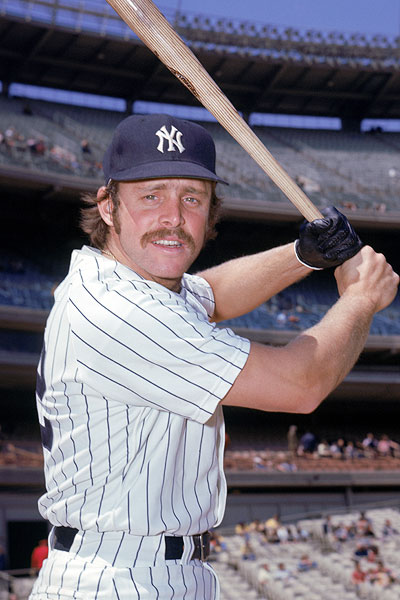 Luis Tiant had led the majors with a 1.91 ERA in 1972 but his 1973 season got off to a rocky start. The Yankees were in town and they went to town, scoring three runs in the top of the first inning. A single, followed by a strike ’em out, throw ’em out double play, sore-armed Sox catcher Carlton Fisk throwing out Horace Clarke trying to steal second. Fisk had been American League Rookie of the Year in 1972. But then came a double, and walks. The crowd of 32,882 was about to witness baseball history. With the bases loaded, Ron Blomberg stepped into the batter’s box. It was the first-ever at-bat for baseball’s designated hitter. Ironically, Blomberg didn’t hit. He didn’t even swing the bat. He walked on four pitches. But he earned an RBI.

A two-run bloop double by Felipe Alou fell in three feet in front of center fielder Reggie Smith during an exceptionally gusty day at Fenway. The Red Sox were in a hole.

Blomberg’s bat made its way to the National Baseball Hall of Fame. Of Blomberg’s base on balls, someone apparently in the press box quipped, “See, it’s added offense to the game already.”1 His second time up, he collected a broken-bat single. Hence, the first two bats he used “wound up in contrasting places — the first in the Hall of Fame, the second in the trash can.”2

The Red Sox got one back off Mel Stottlemyre in the bottom of the first on a solo home run into the center-field seats by Carl Yastrzemski. In 1972 Yaz hadn’t hit his first homer until July 22. Carlton Fisk (who had batted only .107 in spring training) homered in the second, into the netting above the left-field wall with Rico Petrocelli on board.3 A Yankees throwing error allowed another run to score, and Luis Aparicio’s single to shortstop brought in another unearned run. It was 5-3, Boston.

Graig Nettles hit a solo homer off Tiant in the third.

With two outs in the bottom of the third, Fisk doubled, advancing Reggie Smith to third. Doug Griffin’s single to center drove them both in and drove Stottlemyre from the game. Rookie right fielder Dwight Evans singled off reliever Lindy McDaniel, summoned by Yankees manager Ralph Houk.When the inning ended, it was 8-4, Red Sox.

In the bottom of the fourth, Yaz singled, Reggie Smith doubled, and — after Boston’s DH, Orlando Cepeda, struck out for the second time (he’d flied out to left in the third) — Petrocelli was walked intentionally. Fisk was up again. He hit a grand slam into the Red Sox bullpen in right-center. 12-4, Red Sox. Griffin singled and Evans doubled, but McDaniel got the next two.

Fisk was hitting pretty well for a guy who had said, “My arm really hurts. More than it ever has. It hurts me all the time, even when I’m not playing. And it gives me a lot of pain when I throw.”4

Matty Alou doubled for the Yankees in the fifth. He took third on a fly to deep center. Nettles grounded out to the first baseman, Alou scoring. That fifth run was the last one the Yankees scored. Tiant gave up only one more hit, a single by Felipe Alou in the eighth.

The Red Sox scored three more runs, all in the sixth. Casey Cox came in to pitch for the Yankees. Petrocelli singled. Fisk came up to bat. On his résuméfor the 1973 season, Fisk had a two-run homer, a double, and a grand slam. Cox hit him with a pitch, the ball striking him above his right wrist. Doug Griffin bunted back to the pitcher, and reached for a single, loading the bases with nobody out. Evans grounded to shortstop, but an error resulted in one run coming in and the bases still loaded. Tommy Harper singled to center. One more run scored (Fisk).

Luis Aparicio grounded to Yankees second baseman Horace Clarke, who fired the ball to catcher Thurman Munson, forcing Griffin at the plate. Yaz hit a fly ball to center field, and Evans tagged and scored. It was now 15-5 in favor of the home team Red Sox. Cox finished the game for New York without further problems; he even retired Fisk, getting him to ground out to the mound in his final at-bat. Cox threw the ball to first base for the out.

Red Sox manager Eddie Kasko stuck with Luis Tiant, who went the distance, picking up the first of what became 20 wins in the season, despite its being one of his worst outings of the year (five earned runs, five bases on balls). “Tiant was tight in the first inning,” said his catcher Fisk after the game. “It was cold on the field today and tough for a pitcher to get loose. And he was mad at the umpire. He was missing with his control and a couple of the pitches were borderline. As the game went along, he got better. He made some good pitches toward the end.”5 Stottlemyre, of course, bore the loss, charged with eight runs (six earned).

Ralph Houk said afterward, while boarding the team bus: “Nobody got hurt, did they? We’re going to bring in a helicopter in the morning so we can practice catching fly balls in the wind. That’s one thing we forgot to do in spring training.” Houk, wrote the New York Times, said he “had never seen a game so affected by wind and sun.”6

Doug Griffin had four hits in a row. Rico Petrocelli and Tommy Harper each had three base hits. In all, the Sox had 20 hits.

For the Red Sox, it was a welcome way to open the season. In 1972 they had fallen just a half-game short of winning the pennant. A player strike had caused the ’72 season to start late. Once matters were settled, it was agreed to simply play out what games remained on the season.

The Tigers played the 156 games that were on their schedule; the Red Sox had only 155 on theirs. The Tigers finished 86-70 and the Red Sox finished 85-70. Had the Red Sox had the opportunity to play the same number of games, they might have won and had an identical 86 wins. But that wasn’t in the cards, and the Tigers captured the pennant by that half-game.

In 1973 the Orioles won the American League East. The Red Sox finished second, eight games behind. The Yankees finished fourth, 17 games back.

Cepeda, designated to hit for the Red Sox, was 0-for-6 — the only Boston batter to go hitless. By the end of the year, however, he had 86 RBIs and a .289 average. Cepeda was inducted into the Hall of Fame in 1999. The bat he had brought to the plate his first time up had also been sent to the Hall.

Fisk had six RBIs in this Opening Day game and scored four runs.

He hit five home runs in the first seven Red Sox games. He led the Red Sox with 26 homers. After his big day, it seemed as though all he could do was play down his accomplishments. “I wasn’t perturbed when they walked Rico purposely to pitch to me with the bases loaded. I was too busy looking for my batting helmet and wasn’t even in the on-deck circle. I hit the home run into the nets good, but actually, I hit it down towards the handle on the bat a little more than I’d have liked. … On the grand slam, I was just trying to hit a fly ball to get one run in and when I got it up into the breeze, it just took off.”7

3 Fisk also had only three extra-base hits in all of spring training, reported Murray Chass.

5 McDonough. Both theGlobeand the Heraldreported wind gusts between 25 and 45 mph.