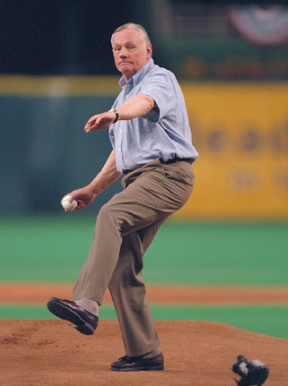 An Opening Day record crowd of 51,668 saw the Houston Astros take on the visiting Chicago Cubs in the 35th and final home opener to be played in the Astrodome.1 This was the Cubs’ first season opener in Houston since April 10, 1962, when they played at Colt Stadium, losing 11-2 to the Astros.2 Chicago would not be victorious this day, either.

Former astronaut Neil Armstrong was on hand to throw out the ceremonial first pitch. This was a treat for the fans. Astros owner Drayton McLane Jr. said, “I called him, and he said, ‘I don’t do public events.’” However, the famous astronaut “relented after McLane explained the historical significance of the game.”3 Flanked on both sides of the infield by 70 current NASA astronauts, the first man on the moon “delivered a one-hop pitch”4 to second baseman Craig Biggio. Armstrong had been present with 23 astronauts on April 12, 1965, to celebrate the first National League game played at the Astrodome. During the pregame ceremonies and introductions of players, the NL Central Division championship banner was raised, to the roar of the crowd.

Houston manager Larry Dierker sent Shane Reynolds to the mound to face Chicago’s Steve Trachsel. It was Reynolds’ fourth straight Opening Day start for the Astros. “Opening night is always special,” he said. “This one was even more special because it’s the last one in the Dome. I think a lot of guys were a little nervous in the beginning. We went through some Pepto-Bismol.”5

Mark Grace silenced the buzz in the crowd with a second-inning home run to right field, giving Chicago a 1-0 lead. The fan who caught the ball was coerced by others in his section to take a page out of the Cubs fans’ playbook, as if this were Wrigley Field: He threw the ball back.6 Tony Eusebio doubled to start the bottom of the third and scored on a one-out single by Reynolds. The Astros loaded the bases with two outs, but Ken Caminiti grounded out to first on a 3-and-2 pitch, and the inning ended with the score tied.

The top of the fourth inning saw a controversial call by home-plate umpire Frank Pulli. Mickey Morandini led off for Chicago with a double to right field. Sammy Sosa topped an offering by Reynolds in front of home plate. Reynolds pounced on the ball and threw to first baseman Jeff Bagwell, but the ball hit Sosa in the back. Morandini raced home with what appeared to be the Cubs’ second run, but Pulli ruled that Sosa was inside the baseline, called him out for interference, and sent Morandini back to second. Mark Grace then singled, advancing Morandini to third, and when Henry Rodriguez followed with a single to center, Morandini scored the Cubs’ second run of the game after all. Regarding the rule on basepath interference, Grace said, “We only got one run, but we easily could’ve gotten more. Last year we got the call and it really saved our bacon.”7 Manager Jim Riggleman complained, “It’s almost impossible to run where the rulebook says you have to run.”8

In a three-pitch span in the bottom of the fourth inning, Trachsel allowed home runs to the first two batters, Carl Everett and Richard Hidalgo, as the Astros went on top, 3-2. Trachsel appeared to settle down after that, but it was too late, as Chicago couldn’t muster any more offense. Houston added a fourth run in the fifth. Bagwell singled to left with two down, went to second on a walk to Caminiti, and scored when Everett lined a single past first base. The clubs posted zeros the rest of the way, and Houston emerged with a 4-2 victory.

Sosa, the 1998 National League Most Valuable Player, went 0-for-4 with three strikeouts (two by Reynolds). After the game Sosa told reporters, “I’m not Superman. I’m going to have a lot of games like this. You have to give a lot of credit to Reynolds and their bullpen.”9 Sosa had hit 66 home runs for the Cubs in 1998. Two bright spots for the Cubs were the performance of Grace, who was 3-for-3, including a home run in his first at-bat of the season, and a 2-for-3 outing by Rodriguez (two singles, but he was erased when caught stealing on a hit-and-run attempt in the top of the second).

Reynolds needed only 75 pitches to get through six innings, and struck out seven Chicago batters. He was relieved by Scott Elarton, who pitched scoreless seventh and eighth innings. In the ninth, Houston closer Billy Wagner wasted no time in striking out Benito Santiago and Jose Hernandez, then fired a 98-mph fastball to Gary Gaetti.10 The ball shattered the bat of Gaetti, who lifted a weak pop fly to short, ending the game.

For the Cubs, Trachsel labored through six innings (108 pitches) and was charged with four runs on seven hits. Matt Karchner and Brad Woodall each pitched an inning.

Everett and Hidalgo combined to go 3-for-7 at the plate, with two homers, three runs scored, and three driven in. Everett said after the game, “I never look at how far my home runs go. But the ball Richard (Hidalgo) hit would have broken the glass (behind the left-field seats) at the new ballpark.”11 Eusebio had a single and a double in four at-bats.

The Chicago Tribune’s Paul Sullivan wrote, “The Cubs would be more than happy to volunteer to take a wrecking ball to the place called the ‘eighth wonder of the world,’ considering it has been their personal dome of doom for 35 years.”12 The Opening Day loss gave the Cubs a record of 81-134 in the Astrodome, a woeful .377 percentage.13

The Astros split the first homestand of the 1999 season with three wins and three losses, but they finished April with a 13-9 mark and were never below .500 after April 17. Houston finished every month in 1999 with a winning record, on the way to the National League Central Division flag.14 And it all began with this victory on Opening Day.

In addition to the sources cited in the Notes, the author consulted baseball-reference.com and retrosheet.org. The author thanks Gregory Wolf, Darrell Pittman, and Bill McCurdy for their assistance in obtaining sources.

1 The Astros were 17-18 in Opening Day games in the Astrodome.

2 Paul Sullivan, “Dome Is Doom for Cubs: 2 Homers Lift Astros in Opener,” Chicago Tribune, April 7, 1999. The record crowd surpassed the previous high of 44,618 for the 1997 opener against the Atlanta Braves.

6 Joseph Duarte, Raising the Roof: Farewell Season in Dome Is Off to a Record Start,” Houston Chronicle, April 7, 1999.

13 For the 1999 season, the Cubs won only two of six games against the Astros in the Astrodome. Chicago also lost five of six to Houston at Wrigley Field.