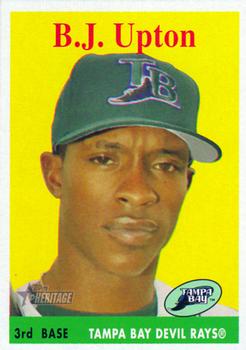 Expectations were high for the Tampa Bay Devil Rays in 2007. A new ownership group headed by Stuart Sternberg took control of the team for the 2006 season and began to repair some of the damage original team owner Vince Naimoli had done to the team’s relationship with its community. Sternberg and head of baseball operations Andrew Friedman hired a new manager — longtime Angels coach Joe Maddon, who promised a winning attitude, even if the actual wins took time to arrive.

Attendance at Tropicana Field increased 20 percent from the 2005 to the 2006 season. The new management made stadium parking free and brought in Disney consultants to create a customer-service training program to make the game experience as pleasant as possible regardless of the score. The talent on the field needed upgrading, too, as the Devil Rays’ record in Maddon’s first year was only 61-101.

During the offseason the Devil Rays made a big investment in talent, signing Japanese star Akinori Iwamura to a three-year, $7.7 million deal, inking left fielder Carl Crawford to a long-term contract, and inviting nonroster free agent Carlos Peña to camp. Peña took over the first-base job, hit 46 home runs, drove in 121 runs, and won the Silver Slugger Award at first base. All three players made key contributions to the team’s first pennant winner in 2008.

The Devil Rays started the 2007 season by splitting a two-game series in New York, losing to the Yankees in the opener, 9-5, but winning the second game, 7-6. A sellout crowd of 38,437 filled Tropicana Park to see the home opener at the domed facility. Florida Governor Charlie Crist came, too, and threw the first pitch.

Right hander James Shields, who after the 2019 season remained the franchise’s all-time leader in wins, started for the Devil Rays, and left-hander Gustavo Chacin took the hill for the Blue Jays. Shields shut out the Jays in the top of the first, striking out leadoff man Reed Johnson, getting Lyle Overbay to ground out, giving up a double to Vernon Wells, but ending the inning by inducing DH Frank Thomas to pop up back to him.

The first three Rays in the batting order —Carl Crawford, Ben Zobrist, and Rocco Baldelli —went down 1-2-3 in the bottom of the first; none of them got on base all game. Shields faced the minimum number of batters in the top of the second. He walked Troy Glaus to start the inning, but catcher Dioner Navarro threw Glaus out stealing, Alex Rios struck out, and Gregg Zaun grounded out.

In the bottom of the second, first baseman Ty Wigginton hit a solo homer to put the Devil Rays ahead 1-0.1

Shields worked out of trouble in the top of the third, allowing a single and hitting a batter to put Royce Clayton on second and Johnson on first with one out. He kept the Jays off the board by getting Overbay to fly out to center (Clayton went to third), and Wells to ground to Iwamura at third, who threw to second for the inning-ending force out. In the bottom of the inning 22-year-old Melvin Upton (then called BJ), in his first full season with the team, pulled a fly into the right-field seats for his first homer of the season, to put the Devil Rays ahead 2-0.

Shields continued to cruise, setting the Jays down in order in the fourth, fifth, and sixth innings. The Rays added another run when Iwamura hit a solo home run in the bottom of the fifth. Elijah Dukes followed that with a single, but was stranded by Upton, Crawford, and Zobrist.

Shields started the seventh inning strongly, getting Thomas to fly out to Crawford in left and Glaus to pop up to second. It didn’t seem like much of a threat when Rios singled with two out, but the wheels came off quickly. Zaun tripled, driving in Rios, and second baseman Aaron Hill doubled, driving in Zaun to bring the Jays within a run, 3-2.

Jays manager John Gibbons sent Matt Stairs up to pinch-hit for shortstop Royce Clayton. Maddon stayed with Shields, who walked Stairs, putting runners on first and second with two outs. John McDonald ran for Stairs (and remained in the game at shortstop). Maddon left Shields in the game to pitch to Johnson, who singled to center, tying the game as Zaun scored and McDonald moved to third.

Finally, with the game tied 3-3, Maddon replaced the exhausted Shields with Brian Stokes, who induced Lyle Overbay to pop out.

Gibbons sent out right-hander Casey Janssen to start the bottom of the seventh. Janssen started the inning by giving up a single to Iwamura (his third hit of the game), but got Navarro to ground to second to start a double play. Dukes tapped back to Janssen for the third out, leaving the score tied.

Maddon picked Shawn Camp to start the eighth inning to preserve the tie, but Camp was not up to the task. Wells grounded to short for the first out of the inning, but Thomas singled and Glaus followed with a home run over the center-field fence to put the Jays up 5-3. Camp pitched to Rios, getting him out on a fly to deep right, and then Maddon brought in Korean pitcher Jeo Kuk Ryu, who ended the inning by striking out Zaun.

Janssen got Upton to ground out leading off the bottom of the eighth, then Jays set-up man Jason Frasor did his job, getting Crawford and Zobrist as well. Ryu kept the Jays scoreless in the top of the ninth. Hill singled but was erased trying to steal second by another good throw from Navarro. Ryu then got McDonald and Johnson to ground out.

Jays closer B.J. Ryan came out for the bottom of the ninth to save the victory. Rocco Baldelli popped out to catcher Zaun for the first out, but Wigginton singled for his second hit of the game, and former Rays number-one draft pick Delmon Young tied the game with his first hit of the day and first home run of the season, a line-drive shot deep into the right-field stands that tied the game, 5-5.

Iwamura, knowing another baserunner could mean a victory, dropped a bunt down the third-base line and beat it out to go 4-for-4 in the game. Maddon pinch-hit Jonny Gomes for Navarro, but Gomes flied out to center for the second out. Rookie Dukes singled to left, sending Iwamura to third. Upton, up next, hit a slow, high chopper to short. Iwamura, running on contact, crossed the plate for the winning run as McDonald, charging the ball to get the speedy Upton, did not field it cleanly. Upton crossed first with an infield single. The Devil Rays won, 6-5. Ryu got credit for the win, his first in the major leagues.

Iwamura had had a lackluster spring training as he adjusted to major-league pitching. This performance in the home opener meant that he reached base in nine of his first 13 plate appearances in the young season. Asked after the game if his large (for the time) free-agent contract meant he felt pressure to succeed, he said, “I feel great pressure but I’m enjoying it.”2 The win gave the Rays a 2-1 record. As Upton said after the game, “You take (wins) any way you can. It doesn’t have to look pretty.”3

In 2007 the Rays improved on their 2006 record by a few games, finishing the year with a 66-96 record. More importantly, the front office and manager Maddon were building a foundation for a winning team. That work would pay off in 2008 with the franchise’s first pennant. Some of the key pieces of the 2008 club were on the roster during this game —Shields, Crawford, Upton, Zobrist, and Iwamura, Peña, Andy Sonnanstine, Edwin Jackson, and Scott Kazmir. The team would trade others, such as this game’s hero, Delmon Young, for players Matt Garza and Jason Bartlett, who would both play key roles in 2008.

After 2007 the Devil Rays officially changed their name to the Rays, changing logos, uniforms, and, more importantly, their direction. They stunned the baseball world the very next season, posting a record of 97-65, winning the AL pennant. They lost to the Phillies in the 2008 World Series, but remained a contender, winning 90 games or more four straight years from 2010 to 2013. It’s fitting, given the success in the years that followed, that the last Devil Rays home opener was a walk-off victory for the team.

In addition to the sources cited in the Notes, the author consulted Baseball-reference.com, Retrosheet.org, the Tampa Bay Times, and the following:

1 Wigginton had started at first for the first three games of the season, but once Peña started playing on April 7, Wigginton played most of his games at second base.