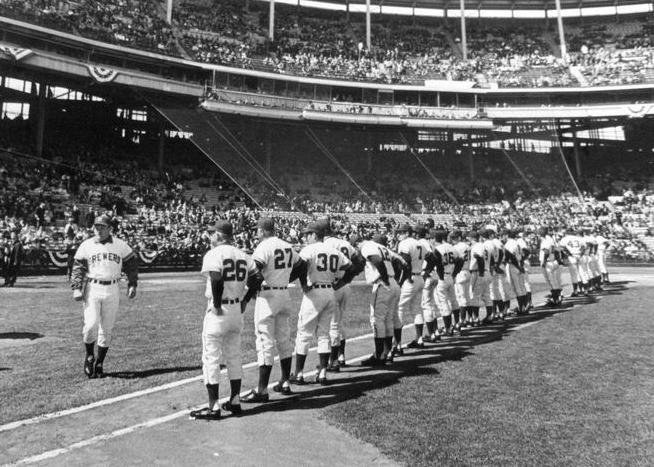 It had been a long wait. The last time County Stadium hosted a major-league game for a hometown team was September 22, 1965, when the Milwaukee Braves lost to the Los Angeles Dodgers, 7-6, but on Tuesday, April 7, 1970, the Milwaukee Brewers inaugurated a new era by hosting the California Angels. Milwaukee once again was major league!

It had been an exciting offseason for Milwaukee baseball fans as former Braves minority owner Bud Selig continued his efforts to purchase the financially struggling Seattle Pilots and move them to Milwaukee. The Pilots ownership gave Selig permission to buy the team on March 16, 1970, but the state of Washington filed an injunction to stop the sale. However, on April 1 federal bankruptcy referee Sidney Volinn ruled that the Pilots were bankrupt, clearing the path to move them to Milwaukee. The relocation happened only a week before the Brewers’ home opener, denying Selig the opportunity to change the team’s colors to navy blue and red, similar to those of his favorite childhood team, the American Association’s Milwaukee Brewers. The team was forced to use the Pilots’ uniforms, with the word “Brewers” covering up the previous name.

Another issue the Brewers organization faced because of the short time before the home opener was ticket sales. The Brewers sold about 2,650 season tickets, and 15,700 for the home opener by the time the ticket office closed on Sunday, April 5. The only single-game tickets being sold were for the first two games against the Angels. Only on Friday, April 10, did all single-game tickets go on sale. The Brewers recognized the support of the fans who bought season tickets for the Chicago White Sox games that were played in Milwaukee in 1969, giving them the opportunity to renew their seat locations for the Brewers’ season.

On the 7th the weather cooperated with clear skies and temperatures in the upper 50s on a fairly windy afternoon. A paid attendance of 36,107 (the final number announced by the Brewers after complimentary and unpaid admissions was 37,237) saw the Brewers get pounded by the Angels, 12-0.

The Angels’ 24-year-old right-hander Andy Messersmith had his fastball working as he struck out 11, giving up only four hits and walking four.

The Angels jumped out to a 1-0 lead in the second inning. Leadoff hitter Alex Johnson tripled and scored on a sacrifice fly by Jim Spencer. They added three runs in the third with a two-out uprising. Sandy Alomar singled and stole second, then Jim Fregosi walked. Bill Voss hit a fly ball to left that Danny Walton misplayed into a two-run triple. Voss scored the third run on a wild pitch by Brewers starter Lew Krausse, giving California a 4-0 lead.

After the Brewers failed to score with the bases loaded in the third, the Angels scored four runs in the top of the fourth against Milwaukee’s new pitcher, John Gelnar. Jim Spencer reached second base on an error by center fielder Russ Snyder, and scored on a double by Roger Repoz. Jose Azcue doubled in Repoz to make it 6-0. Aurelio Rodriguez’s single scored Azcue and chased Gelnar to the showers. George Lauzerique entered and struck out Messersmith, but consecutive singles by Sandy Alomar and Jim Fregosi drove in Rodriguez with the fourth and final run of the inning for an 8-0 lead. The inning also saw Alex Johnson ejected for shouting at plate umpire Ed Runge from the on-deck circle.

The Angels added three more runs in the seventh inning off the Brewers fourth pitcher of the day, Bob Meyer. Voss walked to lead off the inning and Jay Johnstone, who had replaced Johnson in left field, sacrificed him to second base. Spencer singled, driving in Voss, and Repoz tripled to bring in Spencer. Meyer got the second out by striking out Azcue, but Rodriguez singled in Repoz to make the score 11-0.

The Angels  scored a final run in the top of the eighth. Fregosi led off with a double and went to third on an error by Brewers right fielder Steve Hovley. John Morris’s wild pitch enabled Fregosi to score.

The Brewers did have one good performance on the field. Hovley, who had been called up by the Pilots for the second half of the 1969 season, went 3-for-3 with two singles and a double.

The really great performances, however, took place in the stands as Milwaukee celebrated its return to the major leagues. Commissioner Bowie Kuhn, who attended the game, commented, “It’s exactly like I expected, one of the best baseball towns in the country. I was confident that the enthusiasm would be here. It’s just tremendous.”1

A number of former Milwaukee Braves were also there. Fred Haney, who had piloted the club to its only World Series championship, in 1957, later served as the Angels’ first general manager and still worked as a consultant to the club. He noted, “This is still my town. Baseball should have never left here, and it should have been back sooner. I still can’t understand why the White Sox didn’t move up here as fast as they could.”2 Eddie Mathews was excited: “It’s the greatest thing that has happened; just to live here and feel the enthusiasm is a real thrill.”3 Former shortstop Johnny Logan said, “This is tremendous thing for the kids. They can look forward someday to playing here as a Brewer and not have to think in terms of playing for the Cubs or the White Sox.”4

But the Brewers were disappointed in their performance. Manager Dave Bristol commented, “These fans were great. They were just dying for something good to yell about, but we let them down.”5