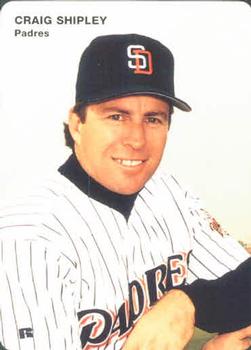 The Houston Astros were hoping to get off to a good start in 1996. Coming off a 76-68 record and second-place finish in the NL Central in 1995, the Astros opened the 1996 season with a nine-game homestand.

It was hoped that a good start on the field would help the Astros at the box office. During the offseason, Astros owner Drayton McLane had threatened to sell or move the team unless the team drew 2.5 million in 1996 (a per-game average of just under 31,000). The Astros had drawn 1,363,801 in 1995.

On April 5 the Padres won the series opener from the Astros, 10-4, sealing the victory with five runs in the ninth inning. On April 6 the teams needed 13 innings and more than four hours to settle the outcome. The Padres finally won the game, 8-4, after a two-out grand slam in the top of the 13th inning by Ken Caminiti.

About 13 hours after the extra-inning affair, the Padres (3-1) and Astros (2-3) took the field for the series finale. The first three innings didn’t give much indication of the impending rout.

A solo home run in the top of the second inning by the Padres’ Marc Newfield staked Padres starter Sean Bergman – making his season (and NL) debut after spending the previous three seasons with the Detroit Tigers – to a 1-0 lead.

Craig Shipley, Archi Cianfrocco, and Brian Johnson – the Padres’ number six, seven, and eight hitters and each making his first start of the season – got things going in the top of the fourth.

Shipley led off with a double off Astros starter Greg Swindell. Cianfrocco singled, and both scored on Johnson’s double to center. Johnson scored on Jody Reed’s two-out single to make it 4-0.

The Padres broke the game open with five runs in the fifth. Caminiti led off by reaching on an error by Astros second baseman Craig Biggio – the first of five errors by the Astros. Newfield followed with a single to end Swindell’s day. Reliever Doug Brocail hit Shipley to load the bases, then Cianfrocco doubled in two runs. Johnson followed with an RBI single. With two outs, Reed capped the inning with a two-run double.

“It was just one of those days when I didn’t have it,” said Swindell, who allowed six runs (five earned) and eight hits in four-plus innings. “We’ve just got to put this game behind us and get ready for the rest of the season.”1

Trailing 9-0 and without a hit going into the bottom of the fifth, the Astros got on the scoreboard. Derek Bell led off the inning with a double and eventually scored on a groundout by Sean Berry.

Shipley, who had hit just 12 home runs in his first eight big-league seasons, extended the Padres’ lead to 10-1 with a solo home run in the sixth inning.

The Padres completed their scoring with three unearned runs in the seventh inning (a walk, two errors, and two singles) and four unearned runs in the ninth inning (including a two-run homer by Brian Johnson). The five errors by the Astros – they had made just five in their first five games of the season – contributed to 10 unearned runs. The final seven runs were off rookie Astros reliever Mark Small.

“I don’t like to see games get out of hand like that,” Padres manager Bruce Bochy said. “But it’s nice to see especially when you give guys days off. I just think it’s a good game for our guys who haven’t been starting.”2

After the Astros scored in the fifth inning, Bergman pitched three more scoreless innings. In eight innings, he allowed just two hits and one run to earn his first NL victory. The Astros scored a run in the bottom of the ninth inning off Padres reliever Bryce Florie.

“We’ve got some guys on this team, where we can have games like this,” Shipley said. “Not that we’ll score 17 runs every game but we’ve got an offense that can go out and have these kind of games. This lineup can produce runs.”3

For the Padres, it was the biggest margin of victory in franchise history – surpassing 14, which they had previously accomplished twice. The Padres also matched their franchise record for runs scored (tying the mark set against Pittsburgh on July 18, 1989, and equaled against St. Louis on August 24, 1993).

For the Astros, who managed just four hits, it was their worst loss in seven years (since an 18-2 loss at Cincinnati on August 3, 1989).

“This was an ugly game, but when you have a game like this the only thing you can say is that it’s just one game,” Astros manager Terry Collins said. “We are better than this and we will play better than this. Nobody is going to panic.”4

Despite the 19 runs being scored, the game took only 2 hours and 35 minutes to complete.

The next day, the Astros ended their three-game losing streak with a 6-2 victory over the San Francisco Giants. But the Giants won the next two games to drop the Astros’ record to 3-6 in their season-opening homestand.

The Astros slowly regrouped. They finished April with a 13-14 record and were 27-28 on May 31. In June, July, and August, the Astros went 47-35 and went into September leading the NL Central with a 74-63 record. But they struggled in September, winning just eight of their last 25 games. The Astros finished in second place, six games behind St. Louis.

The Padres went 17-10 in each of the first two months of the season before stumbling to a 9-19 record in June. But they recovered from their June swoon and went 48-32 over the final three months to win the NL West with a 91-71 record (one game better than the Los Angeles Dodgers) and earn their first postseason berth since 1984.

McLane neither moved the Astros nor put the team up for sale, until 2011.

In addition to the sources cited in the Notes, the author also consulted Baseball-Reference.com, Newspapers.com, and Retrosheet.org.