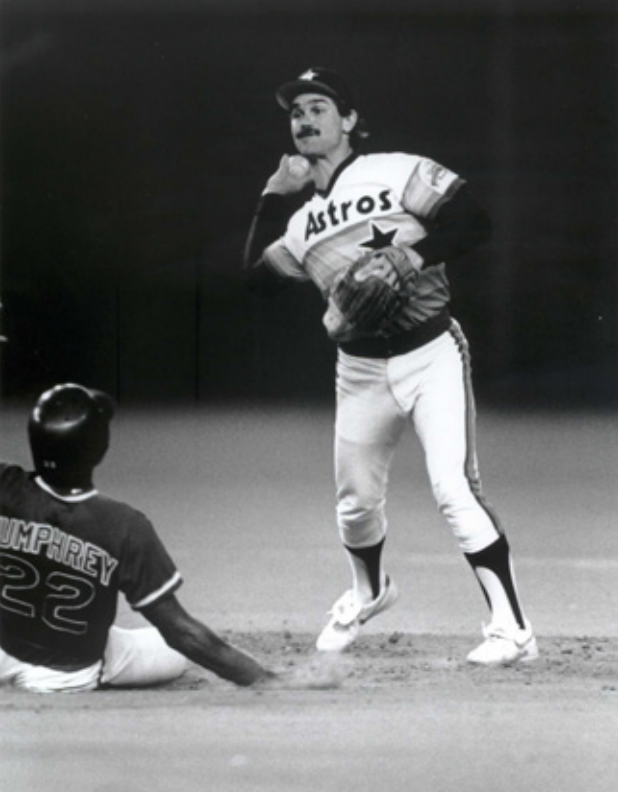 Right-handed hitting Dickie Thon of the Astros didn’t move from his stance at the plate. The rising fastball from Mets pitcher Mike Torrez sailed up and in, striking him flush in the face in the left-eye region. The sickening sound of ball striking bone reverberated through the Astrodome as Thon dropped lifelessly to the ground. He fell like a sleeping pigeon falling from its roost after some alpha hunter boy with a BB gun came along and picked him out to be the next practice kill.

It happened in the Astrodome in a night game played on Sunday, April 8, 1984. It was only the fifth game of the season, but the Dickie Thon beaning in the bottom of the third inning instantly altered the mood of the 10,625 fans who had come to the Dome that night to sate their appetites for a brand-new baseball season.

No one in the media blamed Torrez, a highly respected veteran, for the pitch, which resulted in Thon being taken to the trauma unit of a hospital in the nearby Texas Medical Center. X-rays revealed a fractured orbital bone. Torrez and Thon also issued statements within 24 hours that suggested they each viewed the sad accident as simply one of those unfortunate and regrettable things that happen sometimes in the game of baseball.

“Please tell his family that I hope everything is OK,” Torrez said. “The time before, I pitched him away and I struck him out. So I wanted to start him off inside. He was looking outside and he started out over the plate. My fastball took off and he didn’t have time to get out of the way.”1

Thon missed the rest of the 1984 season, but did return for 84 games in 1985. He played another nine seasons (1985-1993), but he would never again be the hard-hitting shortstop he had become in 1983. That season Thon was a National League All-Star as he batted .286 with 20 home runs for the Astros and his future was periwinkle blue in color and anticipation. It was, of course, the greatest offensive season of his 15-year career. It was also the season that set the bar for what was expected of him in the future.

Things happen. And sometimes, they don’t.

In 1989 with the Phillies, Thon batted .271 with 15 home runs and 60 runs batted in. It was the only season he came close on paper to being the Dickie Thon of 1983, but those numbers for one season also possess the power of deception. A player may look better or worse, based on one season of work.

Greatness is high-level performance over time.

Greatness was not to be for Dickie Thon. Maybe it would not have happened anyway, but the injury had settled the question for all time. Within two years of the injury, the book was closed on Dickie Thon as a potential superstar; he moved on from Houston after the 1987 season.

For his 15 total seasons as a big-league shortstop, Thon still produced at a respectable level. His .264 batting mark, with 71 home runs and 435 runs batted in, were better than most middle-of-the-pack role players, especially at the shortstop position.

Ray Chapman of the 1920 Cleveland Indians as of 2016 remains the only player to have been killed by a pitch in a major-league game. Tony Conigliaro of the 1967 Boston Red Sox survived a beaning similar to the one that happened to Thon.

It was only an early-season evening contest in the Dome of April 8, 1984, but it was important to both clubs. The Mets had taken the first two games of the series and were going for the sweep, sending fireballer Mike Torrez to the mound to face the mysteries of knuckleballer Joe Niekro of the Astros.3

In the bottom of the third, the Astros came close to converting Thon’s beaning into runs. With two outs, Terry Puhl walked and Torrez followed by hitting Thon. Craig Reynolds replaced Thon as a pinch-runner and remained in the game at shortstop. With two now on base, Jose Cruz singled to load the bases, but Jerry Mumphrey popped out to end the threat.

With two outs in the bottom of the sixth and the game still scoreless, Ray Knight doubled off Torrez. Johnson then removed Torrez because a blister had developed on the thumb of his pitching hand. “I’ve had enough experience that I know if it rips, that I’m going to be out for a couple of turns,” Torrez matter-of-factly stated.4

Tim Leary relieved for the Mets and got Phil Garner on a fly ball to right to keep the mutual goose- egg in play for the last time in the game.

After George Foster popped out to Reynolds in the top of the seventh, Darryl Strawberry doubled and went to third base on Mookie Wilson’s infield single, which bounced off Niekro’s leg. Hubie Brooks then singled, scoring Strawberry for a 1-0 lead, and sending Wilson to third base. The rally ended there, however, when Rusty Staub, batting for light-hitting catcher Junior Ortiz, hit into a 3-6-1 double play.

Right-handed reliever Vern Ruhle took over for the Astros in the top of the eighth after Niekro was lifted for a pinch-hitter. Leary singled and Wally Backman walked for the Mets, and Jose Oquendo moved the runners to second and third with a sacrifice bunt. Ruhle then intentionally walked Keith Hernandez to fill the bases for the right-handed-hitting Foster. The move backfired as Foster singled, scoring Leary and Backman for a 3-0 Mets lead. Dave Smith replaced Ruhle and struck out Strawberry and got Wilson on a pop to first to retire the side.

Doug Sisk took the mound for the Mets in the bottom of the eighth after Leary reported some discomfort in his left hamstring. Reynolds reached first on an error by Backman and moved to second base on a groundout by Cruz. Mumphrey followed with a single up the middle to bring Reynolds home with the Astros’ only run of the day. After Knight fanned and Garner singled Mumphrey to second base, Alan Ashby dumped a sinking liner to center that Wilson grabbed for a questionable shoestring catch. Replay seemed to show the catch as a one-bounce trap, but first-base umpire Frank Pulli ruled Ashby out.

Was it a hit or a catch? Davey Johnson said, “When it’s your guy, you always think he got it.” The Astros’ Bob Lillis saw it a little differently: “From where I was, it looked like it might have been in there.” Wilson added, “I held it up but I didn’t see the umpire make a call.”5

The Mets took the game, 3-1, to complete the series sweep – their first in the Astrodome since July 1966.

The moral of the Mookie catch in the days prior to instant-replay umpiring assistance concluded along these lines: Sometimes catches are all in the eye of the beholder, and, in the case of shoestring-catch situations, not all ruled hits are actually in the glove of the holder.

Leary was the winning pitcher (1-0) and Sisk picked up his second save for the Mets. Niekro (0-2) took the loss for the Astros.

The future looked bright for 1983 All-Star shortstop Dickie Thon. Then, on April 8, 1984, he was hit by a pitch from the Mets’ Mike Torrez that fractured his orbital bone, caused blurred vision and undermined his great potential. (Courtesy of Houston Astros Baseball Club).

3 astrosdaily.com/history/1984/game198404080.html.  All facts used in the inning-by-inning narrative scoring descriptions of the April 8, 1984, game are derived from this source.