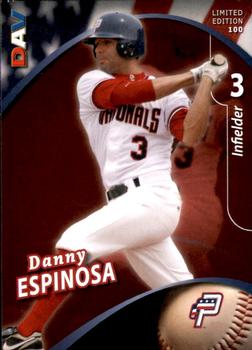 Opened to baseball on April 19, 1984, Pfitzner Stadium is plopped in the heart of the McCourt Government Center in Woodbridge, Virginia, seating 6,000.1 The “Pfitz” has been the home of several incarnations of a Class-A franchise, the Potomac Nationals, under the ownership of Art Silber. The field has never drained well.

On the evening of Saturday, August 1, 2009, the Pfitz hosted the third game of a four-game series between the defending Carolina League champions Potomac Nationals (“PNats”) and the Winston-Salem Dash. The PNats in 2005 became the advanced Class-A farm club of the Washington Nationals. The Dash were a Chicago White Sox farm team.

At game time the temperature was 82 degrees and it was cloudy. The Dash were 57-45 and the PNats 61-42, both teams first in their respective divisions. Managers Joe McEwing of the Dash and the PNats’ Trent Jewett set their lineups, going over ground rules with home-plate umpire Andy Dudones. After a 41-minute rain delay, the field was playable. A crowd of 4,878 came through the turnstiles. The Dash dominated for 2 hours and 37 minutes.

The Dash starting pitcher, 22-year-old Justin Edwards, was a left-handed prospect selected in the third round of the 2006 amateur draft.2 On this night Edwards arguably pitched the best game of his career, “dominant on the mound.”3 For seven shutout innings, he gave up three hits with two walks and five strikeouts. His only blemish was a throwing error on an attempted pickoff in the sixth. His teammates gave him all the support he needed to win his third game of the year for the Dash, against two losses since being promoted on June 18 from the Kannapolis Intimidators of the lower Class-A South Atlantic League.4 This performance enabled him to be named the Carolina League Pitcher of the Week for that week.5 Baseball is an unforgiving game: By 2012 Edwards was out of Organized Baseball. After two disappointing seasons with the White Sox’ Double-A Birmingham Barons in 2011, he was released on January 3, 2012. He signed a minor- league deal with Colorado on February 7, 2012. He was released by the Rockies on March 30, 2012. No one else showed any interest.6

Dale Mollenhauer led off, popping a pitch from PNats pitcher Adam Carr into the right-field glove of Aaron Seuss. Carr and Edwards pitched two scoreless innings to start the game. All the offense the Dash needed to win occurred in the third inning. With one out, second baseman Mollenhauer slashed his 20th double to left field. Carr uncorked a wild pitch to advance Mollenhauer to third. After shortstop Greg Paimi fouled out to second baseman Michael Martinez, first baseman Jim Gallagher snaked a groundball to center field to score Mollenhauer. The Dash would score five runs on 12 hits; the PNats mustered four hits.

The Dash added insurance runs in the top of the sixth when third baseman Brent Morel led off with his 23rd double of season on a line drive to Seuss in right field. DH Seth Loman followed with his 12th double to right field, scoring Morel. Dash right fielder Salvador Sanchez tried to advance Loman by bunting, but popped out to catcher Devin Ivany in foul territory. With Tyler Kuhn batting, the wild pitch haunted Carr again as he unleashed his second of the game, advancing Loman to third. Kuhn came through with a sacrifice fly to center fielder Boomer Whiting. The Dash led 3-0.

Edwards ended his day with a one-two-three bottom of the seventh. The Dash bullpen met the challenge. Nathan Jones took over from Edwards in the eighth, allowing a walk and stolen base to shortstop Danny Espinosa. Carr lasted six innings, replaced in the seventh by Osvaldo Rodriguez, who pitched two shutout innings, and by Justin Phillabaum in the ninth.

The first Winston-Salem batter Phillabaum faced in the ninth, Sanchez, smacked a ball over the left-field wall for his 13th homer, making it 4-0. Phillabaum, just promoted to Potomac from the low-A Hagerstown Suns, struck Kuhn out swinging for the first out. Catcher Logan Johnson smacked his 11th double of the season to center field. Kent Gerst struck out swinging. With Mollenhauer at the plate, another wild pitch advanced Johnson to third. The PNats intentionally walked Mollenhauer. The strategy failed when Paimi hit a groundball to right field, scoring Johnson. The Dash led 5-0. Dash reliever Santo Luis dispatched the PNats, giving up just a single to Jesus Valdez.7

Twenty-four young men played that evening. One life was cut down in tragic circumstances. Five others made it to the major leagues.

Drafted by the White Sox in 2006, Kent Gerst was the 2007 MVP for the Bristol White Sox of the rookie Appalachian League. Released by the White Sox at the end of 2009, Gerst bounced around the independent Frontier League for two seasons. On September 9, 2012, Gerst was reported missing, then found dead that evening under the Peruque Creek Bridge in O’Fallon, Missouri, his hometown.8 The O’Fallon police believed he fell from a small bluff. His family claimed that witnesses saw Gerst in a fight the night before in the parking lot of Moudy’s Bar and Grill, about two blocks from where his body was found, and was seen running from the scene.9 The St. Charles County prosecutors declined to file charges, ruling it an accidental drowning.10

Of those who played that evening, Brent Morel and Nate Jones of the Dash, and Danny Espinosa, Michael Martinez, and Christopher Marrero of the PNats made it to the majors. Each experienced some success and similar disappointments.

A third-round pick of the White Sox in the 2008 draft and the recipient of a $458,000 signing bonus,11 Brent Morel played for the White Sox and Pittsburgh Pirates from 2010 through 2015. On September 10, 2010, he had his first major-league hit and home run in the same at-bat off Bruce Chen of the Kansas City Royals. He was the White Sox third baseman in 2011. Afterward, he bounced back and forth from Triple A. He signed with Nippon Professional League’s Orix Buffaloes for the 2016 and 2017 seasons, retiring on December 2, 2017.

Nate Jones was a relief pitcher with the White Sox, debuting in 2012 at age 26, going 8-0 in 65 games. The longest-tenured White Sox player at the time, he suffered a season-ending flexor mass tear in 2019. White Sox general manager Rick Hahn expressed concern for Jones’s future: “I believe this is his third, possibly his fourth procedure in the last four or five years. … [T]o now undergo another setback is, I’m sure, very discouraging. …” 12 After pitching with the Reds in 2020 and the Dodgers and Braves in 2021, on August 19, 2021, Jones announced his retirement from professional baseball.

From the Dominican Republic, Michael Martinez made it to the majors at age 28 as a Rule 5 draftee with the Philadelphia Phillies, playing with a series of teams from 2011 through 2017. After sitting out 2018, he spent 2019 with the independent Lancaster Barnstormers of the Atlantic League and the 2021 and 2022 seasons with the High Point Rockies of the Atlantic League as a utility player.

Chris Marrero was selected by the Nationals with the 15th overall pick in the 2006 amateur draft, signing for a bonus of $1,625,000.13 He never achieved the potential envisioned for him, playing briefly with Nationals and later the Baltimore Orioles. He made the 2017 Opening Day roster of the San Francisco Giants.14 On April 14 he hit his first major-league home run, off Tyler Anderson of the Colorado Rockies.15 He was designated for assignment on April 24.16 For the 2018 and 2019 seasons, he played with the Orix Buffaloes as an outfielder and first baseman.

“Dirtbag’s A Future,” blared the headline in the July 6, 2009, Long Beach (California) Post.17 The 22-year-old switching-hitting Danny Espinosa was a highly valued prospect with power and above-average defense. Drafted in the third round (87th overall) from the Long Beach State Dirtbags by the Nationals in 2008, he signed for $525,000.18 He was on track to the majors, selected for the 2009 Futures Game19 and named to Carolina League’s postseason all-star team.20 He was a National by September 2010 until the end of 2016, when he was traded to the Los Angeles Angels. Though he had 98 career homers and was known for his fielding, his propensity to strike out was his undoing. He evolved into a journeyman, playing briefly with the Angels, Mariners, Rays in 2017. After playing in 2018 for in Triple-A for three organizations and the Mexican League, he was an infielder for the Triple-A Syracuse Mets in 2019, a 32-year-old veteran of the majors trying to find a road back to the big leagues.21 Espinosa played for Mexico in the Tokyo Summer Olympics and in the Mexican League in 2021.

In addition to the sources cited in the Notes, the author also consulted baseball-reference.com and milb.com.

2 Committed to the University of Georgia after a stellar career at Orlando’s Olympic High School, Edwards signed with the White Sox for $310,000. He plateaued at Double A.