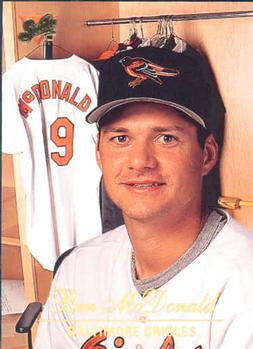 With the deadline for a players strike less than 48 hours away providing an ominous backdrop, the Baltimore Orioles and New York Yankees faced off at Yankee Stadium on August 10, 1994, knowing that the game could be their last meeting of the season.

As it turned out, the game would be the last for the 1994 Orioles and their manager, Johnny Oates, who was fired by owner Peter Angelos in late September after the work stoppage forced the cancellation of the remainder of the season. Oates was hired as manager of the Texas Rangers in 1995 and shared the American League Manager of the Year award with Joe Torre in 1996.

The pitching matchup on August 10 featured Yankees ace Jimmy Key, who entered with a major-league-leading 17 wins and finished a close second to Kansas City’s David Cone in the American League Cy Young Award voting after the season. Key’s opponent was Baltimore right-hander Ben McDonald, who brought a 13-7 record into the game and had fired a one-hit shutout against Milwaukee in his previous outing, on August 5.

A crowd of 38,624 settled into Yankee Stadium on a pleasant, 79-degree summer evening and saw the Orioles score with a two-out rally in the top of the first inning. Singles by Rafael Palmeiro and Cal Ripken Jr. were followed by Leo Gomez’s RBI double that provided the game’s only run through the first four innings.

McDonald was in command of the game from the start, retiring 16 of the first 18 hitters he faced into the sixth inning, thanks in large part to outstanding fastball command. “My curve wasn’t that good and the location of my fastball was exceptionally good. So I just stuck with what was working,” McDonald told the Baltimore Sun after the game.1

The first Yankee to reach base was catcher Matt Nokes, who singled to right field to lead off the bottom of the second. Don Mattingly followed with a drive to the wall in left-center, but speedy left fielder Brady Anderson ran it down, taking away the Yankees’ best scoring chance of the first six innings.

In the top of the fifth, the Orioles extended their lead to 4-0. Palmeiro’s double drove in two runs and another run scored on Gomez’s RBI groundout.

With McDonald still cruising, the Orioles added to their lead in eighth. Jeffrey Hammonds’s infield single drove home Harold Baines to make it a 5-0 game, and Palmeiro hit a two-out, three-run home run — his 23rd of the season — off reliever Terry Mulholland to make the score 8-0.

In the bottom of the eighth, McDonald saw his scoreless streak end at 16 innings after he left the game with forearm cramps after a one-out double by second baseman Pat Kelly. According to the Baltimore Sun, McDonald’s “quest for a complete-game shutout ended when he threw his 92nd pitch, with one out in the eighth, shook his arm, and walked into the clubhouse with trainer Richie Bancells.”2

McDonald was replaced by right-hander Alan Mills, who allowed a single to left fielder Luis Polonia that advanced Kelly to third. Third baseman Wade Boggs batted next and grounded out, scoring Kelly with the Yankees’ only run of the game. Mills pitched a scoreless ninth inning to wrap up the 8-1 victory and, though no one knew it at the time, make the Orioles winners in their final game of the 1994 season.

During the final innings, players heard the chants of fans pleading for there to be no strike. “I wanted to start chanting, ‘No Choice, No Choice,’” Mattingly told reporters after the game. Polonia added, “It’s sad. … I look up and I see the fans crying. I hope they understand what’s going on.”3

McDonald earned the victory, improving his record to 14-7, while Key allowed 10 of the Orioles’ 15 hits and fell to 17-4, losing for the only time in 1994 to a team with a winning record.

Palmeiro was the offensive star for Baltimore, finishing 4-for-5 with five RBIs and three runs scored. Ripken had three hits to finish the abbreviated season with a .315 batting average — a strong bounce-back performance from his .251 and .257 averages in 1992 and 1993 respectively.

For the Yankees, Kelly was the only player to collect two hits in the game. First baseman Mattingly went 1-for-4 and finished the season with a .304 average — his first time over the .300 mark since 1989 — in what would be his next to last season before retirement.

What should have been an important battle between the top two teams in the AL East Division was largely overshadowed by the strike that was scheduled to begin two days later.

Tom Keegan wrote in the Baltimore Sun, “There is a chance the game didn’t matter, given the standings as they relate to the impending strike, but the Orioles acted as if it mattered. They played a kids’ game as only adults can play it.”5

The Orioles returned home after the game for a scheduled game the following night — the final day of the season before the scheduled strike date of August 12 — vs. the Red Sox, but that game was halted by rain in the bottom of the third inning with Boston ahead, 1-0. After a 2-hour, 16-minute delay, the game was postponed and, though it would not become official for several weeks, the season had ended for the Orioles.

“I thought both ball clubs were very lackadaisical for two innings,” Orioles manager Johnny Oates told the Baltimore Sun after the rainout. The Sun noted, “Afterward, Orioles players packed all their belongings and cleared out their lockers.”6

The Yankees were beaten, 8-7, by Toronto the next day in 13 innings, their fifth defeat in six games, to conclude the abbreviated season.

After the games of August 11, the owners and players went their separate ways, meeting only sporadically in the weeks that followed. As the strike moved into late August, then-acting Commissioner Bud Selig established a deadline of September 9 for resolution of the strike or else the remainder of the season would be canceled.

Ultimately, Selig’s announcement came on September 14 — the 34th day of the strike — when he proclaimed: “In order to protect the integrity of the Championship Season, the Division Series, the League Championship Series and the World Series, the 28 Clubs have concluded with enormous regret that the remainder of the 1994 season … must be canceled.”7

In addition to the sources cited in the Notes, the author relied on Baseball-Reference.com for research assistance.