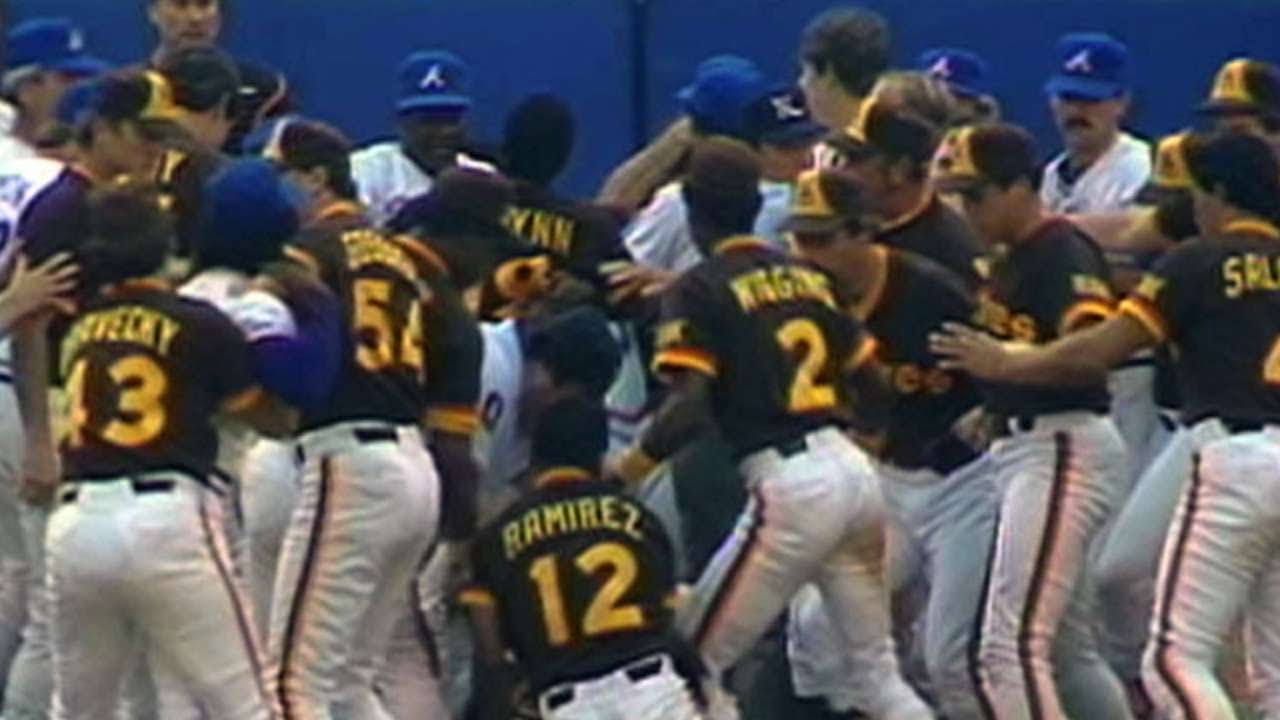 A record 17 ballplayers were ejected during one game. The San Diego Padres were in first place in the National League West, and the Atlanta Braves were in second, but they weren’t exactly battling it out in this Sunday game — the Padres had a 10½-game edge over Atlanta, with 46 games left on their schedule. They’d just added two games to that lead with a 4-1 win over the Braves the night before and a 10-4 win on Friday night.

Umpire Steve Rippley had worked the August 11 game at first base and he recalled that San Diego second baseman Alan Wiggins had repeatedly tried to lay down bunts for base hits. Braves right-hander Pascual Perez was sitting in the dugout, at the first-base end, charting pitches. After the third bunt attempt, he recalled, Perez “started yelling at Wiggins. ‘Swing the bat. …’ You know, baseball crap. They were yelling back and forth at each other, and then the fourth one they got on each other again, screaming.”1

Wiggins was the leadoff batter in the top of the first in the Sunday afternoon game and Perez was the pitcher. With the first pitch of the game, he hit Wiggins. No harm done. The Braves took a 2-0 lead in the bottom of the first when Claudell Washington homered off San Diego’s Ed Whitson.

Perez came up to bat in the bottom of the second, and Whitson tried to hit him but threw a wild pitch. Both teams were given warnings by Rippley, working the plate in this game. Whitson struck out Perez. The Braves did add a run in the inning and led 3-0.

In the bottom of the fourth, Whitson tried again to hit Perez — not once, but three times. And failed all three times. Rippley had seen enough. Whitson was ejected and so was San Diego manager Dick Williams. Greg Booker took over for Whitson, and Ozzie Virgil Sr. became acting manager, now that Williams had been tossed.

In the top of the sixth, while the Padres were batting, both of the two replacements were themselves ejected — Booker and Virgil.

Jack Krol now became the third manager of the game for San Diego. Greg Harris became their third pitcher, and was somehow able to get through two innings without incident.

After 7½ innings the score stood 5-1, Braves. When the Braves came up to bat in the bottom of the eighth, it was looking likely to be their last time at the plate. Craig Lefferts came in to pitch for the Padres. He got the first batter out, but then up came Pascual Perez. Oops! Hit by pitch. Both benches cleared. Lefferts was ejected, and so was Krol. The Padres had thus had three managers ejected in one game.

Bob Horner of the Braves was out with a broken hand and in the press box when the game began, but as the ongoing bad blood had been evident, he had gone to the locker room and suited up. After the game, he said, “You didn’t have to be a brain surgeon to figure out what was going on.”2 The brawl lasted 10 minutes and Perez had wisely returned to the Braves bench — but San Diego first baseman Champ Summers had left his team’s bench (he was not playing in the game) and tried to attack Perez there, but was blocked by Horner. Summers was ejected, of course. Horner was not — since he was on the DL and thus not even officially at the game.

Padres left fielder Bobby Brown was tossed, as were three Braves who had come from the dugout and bullpen to join the fray — outfielder Gerald Perry and pitchers Rick Mahler and Steve Bedrosian.

The score in the game was 5-1 in the Braves’ favor. The score in ejections stood San Diego 8, Atlanta 3.

Then there was the top of the ninth. Donnie Moore took over pitching duties for the Braves. All he needed to do was secure three outs and the game would be over. But he hit the first batter, Graig Nettles. So Moore was ejected, and so was Braves manager Joe Torre — who had, of course, been warned back in the second inning. But Nettles was ejected, too — he’d charged the mound after being hit. The benches cleared again. Tim Flannery, who had pinch-hit earlier in the game and been replaced, was now thrown out of a game he could not otherwise re-enter. Goose Gossage, who had retired the last two batters in the Braves’ eighth, was tossed, too. So was San Diego’s Kurt Bevacqua (who had been on the bench and was standing in the dugout; when hit by a beer, he charged into the stands).

Umpire crew chief John McSherry, working first base in the game, took action to prevent a further bench-clearing brawls — he cleared both benches himself, ordering all the remaining players to their respective clubhouses. They would be available to play, but not permitted to sit on the benches, awaiting a possible call to play. He contemplated forfeiting the game, but this would have meant rewarding the Braves, who had been the initiators.

“We started worrying about crowd control,” McSherry said after the game. “That’s the reason we cleared both benches.”3 Policemen were positioned on the tops of both dugouts, and police later said five fans had been arrested.4

After the game, McSherry said of the brawl, “I’ve never seen violence like that. It’s a miracle somebody didn’t get seriously hurt.”5 San Diego GM Jack McKeon accused the umpires of losing control of the game. McSherry retorted, “The guy who lost control was in their dugout,” referring to Williams, who watched the last few rounds from the stands. Atlanta Constitution columnist John McGrath headed his admittedly biased column “Padres’ Williams Wanted to Play Thug for a Day.”6

Gene Garber took over pitching duties. Catcher Terry Kennedy doubled, and the Padres scored twice, on back-to-back sacrifice flies, but finally Garber retired Garry Templeton and the game was over.

Fourth on the Padres’ managerial depth chart was bullpen coach Harry Dunlop. It was he who was acting manager when the game ended.

In postgame comments, Torre called Dick Williams “an idiot and you can spell that with a capital I,” and said, “He should be suspended for the rest of the season.”7 While he was at it, Torre added, “It was gutless. It stinks. It was Hitler-like action.”8 Dick Williams said the Braves started it. “We will not be intimidated.”9 Bob Watson of the Braves declared, “It won’t end here.”

In all, five Braves were tossed and an even dozen Padres. Two guys who didn’t get thrown out were Perez and Wiggins. In fact, Perez got the win, improving his record to 11-4.

Dick Williams was suspended for 10 days and fined $10,000, and Torre for three days, fined $1,000.10 Five players were also suspended and fined, two from the Padres and three from the Braves. Seven other Padres players and the team’s first two ejected acting managers were also fined.

In addition to the Sources cited in the Notes, the author relied heavily on the Retrosheet description of the game and a number of videos on YouTube, the longest of which appears to be at: youtube.com/watch?v=rlHJ9ZaREmc. An earlier account of this game was written by the author for Rule 5.01 — “Play Ball!” in The SABR Book on Umpires and Umpiring (SABR, 2017) and much of the material is drawn directly from that account. Box scores can be found at:

2 Steve Dolan, “14 Are Ejected as Beanball War Erupts in Atlanta,” Los Angeles Times, August 13, 1984: C1. Different newspapers gave different numbers of how many had been ejected.