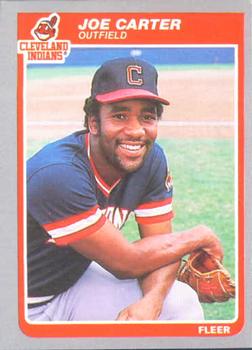 One of the attributes of the great game of baseball is the memories, whether it is of a favorite player, a beloved team, or a stadium. Perhaps the recollection is of the company of your family or friends at the ballgame. It is also the memories that are passed on to the younger fans by a father or an uncle. In many cases, opinions are formed by a son or daughter, nephew or niece, because they may not have another source from which to draw a conclusion.

This is especially true when the tradition of an old-timer’s game precedes the ballgame. On August 12, 1984, the New York Yankees and Cleveland Indians both participated in this long-gone custom. No doubt tales were relayed while the game was being played. Players from the past included Yogi Berra, Bobby Murcer, Tom Tresh, Bill Skowron, Enos Slaughter, Bob Feller, Sam McDowell, Tito Francona, Gene Woodling, and Larry Brown.

A grand slam by Brown carried the aged Indians past their counterparts by a 5-0 score. The major-league game would follow a similar script.

Perhaps the fans of both clubs, old and new alike, would have preferred the days of yesteryear instead of 1984. Both New York and Cleveland were in the American League East Division and like the other teams in the division, they had to be disheartened at their chances for a title. Detroit got out of the gates fast, posting a 37-9 record in April and May. The Blue Jays hung around for a bit, but gradually faded. Like a champion thoroughbred, the Tigers galloped to the finish line by double-digit furlongs. They were never threatened, not even in the postseason, as Tiger Town celebrated its first world championship since 1968.

The Yankees were in the middle of the pack in the division, while the Tribe was in the cellar. What became an all-too-common event in Cleveland was what veteran the team would trade for a handful of prospects. The 1984 season was no exception. On June 13 Cleveland dealt pitchers Rick Sutcliffe and George Frazier and catcher Ron Hassey to the Chicago Cubs for pitcher Don Schulze, outfielders Mel Hall and Joe Carter, and minor leaguer Darryl Banks.

Sutcliffe was the main player in the deal. He had led the Indians with 17 wins in 1983 and was selected to the All-Star Team. But in 1984 he was off to a slow start. Sutcliffe was 4-5 with an ERA of 5.15 at the time of the trade. Hall was a platoon outfielder with the Cubs, while Carter was the big prize. He was a highly regarded prospect; he had been named The Sporting News College Player of the Year in 1981 while he was at Wichita State. Although he made his major-league debut with the Cubs in 1983, Carter was relegated to the minors in 1984. He was batting .310 at Triple-A Iowa with 14 home runs and 67 RBIs.

Sutcliffe found the Windy City much to his liking, going 16-1 and winning the National League Cy Young Award. At the time of the deal, he remarked, “It is a really bad trade for Cleveland. The Indians sent Ron Hassey, George Frazier and me to the Cubs and they got Mel Hall and three minor-leaguers in return. That’s not much. It would seem that the Indians would get more than Hall, who was platooning in the outfield. I’d have thought they get some other regular players.”1

The Yankees had won their first 11 games against Cleveland in 1984.It was pure dominance by the Bronx Bombers. The pitching matchup for the matinee meeting pitted the Yankees’ Ron Guidry (10-8, 4.03 ERA) against the Tribe’s Bert Blyleven (11-5, 3.34). Both hurlers had accomplished careers and were still two of the game’s finest pitchers. “On the way to the Stadium, my kid asked me what it would take to beat the Yankees,” said Indians manager Pat Corrales. “I told him it would take a shutout by Blyleven.”2

Both pitchers were sailing through the first few innings, as the zeroes on the scoreboard related the story thus far. Blyleven received a little help from his new left fielder. With two out in the top of the second inning, Steve Kemp singled to left field. Kemp tried to stretch the hit into a two-bagger, but he was thrown out by Carter. In the fifth inning Kemp drilled a shot to the power alley in left-center field, but Carter chased it down at the track. “Last year we didn’t have an outfielder who would have got close to that ball,” said Corrales. “With him out there it’s like having two center fielders.”3

In the bottom of the fifth Cleveland was able to put a crooked number on the scoreboard. With two outs, Brett Butler walked. Carter came to the plate and smashed a homer to left field, his third home run for the Indians. The Indians loaded the bases after Carter’s blast, but they were unable to score another run.

In the sixth inning the Indians got singles from Brook Jacoby, Mike Fischlin, and Butler to load the bases again. Yankees skipper Yogi Berra looked to be contemplating a move to the bullpen to replace the left-handed Guidry. Mike Armstrong, a right-hander was warming up. “(Indians’ hitting coach Bobby) Bonds yelled at me to bat before Berra changed his mind,”4 said Carter.

Indeed, Berra did leave Guidry in and Carter smashed a grand slam into an upper-deck loge in left field. Guidry hit the showers as Armstrong entered the game.

The rest of the game was all Blyleven. The Dutchman sailed through the final three stanzas, scattering five hits and striking out five for the shutout. “I wanted to do well in front of the large crowd (17,143),” Blyleven said. “I think when any pitcher goes out there he wants to stay aggressive and get ahead of the hitters. I think our pitchers have been falling behind too soon. I just wanted to get a lead and then stay ahead of the batters.”5

“He pitched a normal game for him,” said New York’s Dave Winfield. “But he’s one of the best pitchers around.”6

Indians first baseman Pat Tabler commented about Carter’s day: “I wish it was me. He has a lot of talent. I’ll tell you he has a heckuva lot of talent – and he is still learning. Those two balls were crushed.”7

As for Carter, he was rightfully overjoyed. “I never had six RBI in a game before,” he said. “But I hit two homers five or six times in Triple A. Things just went well today. I just couldn’t do anything wrong. It’s good to beat the Yankees for the first time this year. That’s the main thing.”8

The Indians finished the 1984 season in sixth place in the AL East. New York finished third. Guidry bounced back in 1985 with a 22-6 record and a 3.27 ERA. It was the third time he topped 20 victories in a season.

Blyleven finished the 1984 season with a 19-7 record and a 2.87 ERA. He was traded to Minnesota in 1986, and was a member of the Twins’ world championship team in 1987. He was elected to the National Baseball Hall of Fame in Cooperstown in 2011, garnering 79.7 percent of the baseball writers’ vote.

As for Carter, he eventually found himself in circumstances similar to what Sutcliffe faced in 1984. At the end of the 1989 season, Carter had one year left on his contract. However, he was probably going to test the free-agent market for the first time in his career. Instead of losing him to another team, Cleveland dealt Carter to San Diego for Sandy Alomar Jr., Carlos Baerga, and Chris James on December 6, 1989.

Carter signed a new three-year deal with the Padres. But one year later, San Diego traded him to Toronto. Carter saved his most dramatic home run for the biggest stage. His three-run blast off the Phillies’ Mitch Williams in Game Six of the 1993 World Series delivered Toronto its second straight world championship.