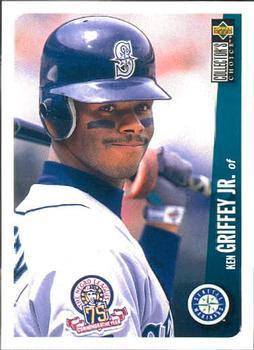 While Ken Griffey Jr. didn’t join the contingent of players who skipped minor-league baseball altogether, he did skip one traditional step during his quick ascension to the major leagues in 1987 and ’88: Triple A.

But 6½ years after breaking out as a teenage phenom for the Seattle Mariners in 1989, Griffey made an impromptu appearance in the minors during a rehab assignment, suiting up for the Tacoma Rainiers to play in the first Triple-A game of his career at Tacoma’s Cheney Stadium on August 13, 1995.

“He came down for two or three days to do some rehab work and hit before he was going to go up (to the Mariners). It was a Sunday morning and I was at the ballpark early, and he was there early for his therapy,” said Kevin Kalal, a longtime employee of the Rainiers who eventually rose through the ranks to become the assistant general manager. “The plan was he was going to hit a little and leave, and he said, ‘Hey, what do you think would happen if I played today?’

And so began the scramble to get word through Tacoma and the surrounding area that Rainiers fans would have a chance to see arguably the best player of the generation for one night only. A crowd of 7,268 gathered for the third game of a four-game series against the Edmonton Trappers,2 and while Griffey went hitless, the home team nailed down a 5-3 victory to move a game over .500 and take sole possession of second place in the Northern Division of the Pacific Coast League.

Tacoma, which had rebranded as the Rainiers for 1995 when they became a Mariners affiliate after 15 seasons serving the Detroit Tigers as the Tacoma Tigers, not only wanted to help Griffey get back into game shape, their front office wanted to take advantage of a huge marketing opportunity surrounding the region’s most prominent athlete—especially after being deprived of having Griffey in uniform for the entire weekend series.

“We weren’t prepared for him to play that day,” Kalal said. “At the time, the Mariners … had an early start in Kansas City, so I called the Kansas City press box and got a hold of the radio producer and said, ‘Ken Griffey Jr. is in the lineup this afternoon for Tacoma.’”3

After Griffey took batting practice with the Mariners at the Kingdome on Monday, Tuesday, and Wednesday, the plan had been for him to begin a rehab assignment with the Rainiers for the entire weekend series against Edmonton, while the Mariners began a seven-game road trip. But on Thursday, Dr. Ed Almquist examined Griffey’s wrist and advised the team against having him play, suggesting that Griffey just work out with the Rainiers instead.

“This is not a setback,” Woodward said in a statement. “Junior has made a tremendous recovery returning from a major injury, but Dr. Almquist feels that he needs a few more days before he sees live pitching. He is taking every precautionary measure with Junior, and I wholeheartedly support that approach.”5

By Sunday, Griffey had taken matters into his own hands, and while he didn’t have a day to remember at the plate with a pair of weak groundouts and a strikeout against Oakland Athletics farmhand Stacy Hollins,6 his teammates picked up the slack to push Tacoma to its seventh straight victory.

Starter Bob Milacki—who had 774⅔ major-league innings to his credit but hadn’t appeared in the big leagues since he lost three straight starts for the Kansas City Royals between July 4 and 16, 1994—continued his sharp season with Tacoma. Milacki came to the organization on July 7, 1995, when the Mariners sent starter Dave Fleming to the Royals. Milacki was 8-3 for the Triple-A Omaha Royals before the trade, and after eight strong innings against Edmonton, he moved his ledger with the Rainiers to 5-2.7

Milacki allowed a run in the top of the first inning but allowed only six hits and a walk while striking out four.

“I started changing speeds, trying to keep them off-balance,” Milacki said. “I’m not the type of pitcher that throws 95 [miles per hour], maybe 85. So it’s important to get ahead of hitters and hit spots.”8

Tacoma’s Darrell Sherman hit a rare home run to lead off the bottom of the first, knotting the score. The speedy center fielder hadn’t homered since 1992 when he was with the Triple-A Las Vegas Stars as a San Diego Padres prospect and wrapping up his fourth straight minor-league season with at least 40 steals.

Not to be outdone was right fielder Gary Thurman, who added a solo home run for the Rainiers in the third. Thurman wasn’t in a homerless drought as prolonged as Sherman’s, but between his time in the minors and majors (1985-98), Thurman hit a home run only once every 134 plate appearances.

Arquimedez Pozo hit his ninth homer of the season—another solo shot—in the seventh for a 3-1 lead.9

“This was a real fun day,” said Rainiers manager Steve Smith. “It was a nice touch to have Ken Griffey here. We hit three home runs and got good pitching again.”10

One inning later, Thurman hit a leadoff single and Griffey was pinch-hit for by the recently promoted Julio Peguero, prompting boos from the crowd. But Peguero delivered an RBI triple and Darren Bragg added an RBI single later in the inning for a 5-1 lead.

Reliever Jim Mecir was charged with two runs in the top of the ninth before 36-year-old Lee Guetterman entered to get the final out and record his fourth save of the season.

Griffey said that when he came to the plate in the first inning, it was like the first at-bat of spring training, but that he felt it was important to get at least one game of live pitching before returning to see Dr. Larry Pedegana, the Mariners team physician, who would make the final decision of when Griffey would return to the majors.

“It’s going to be all right,” Griffey said after the game while holding ice against his wrist. “It’s like my dad said about a knee injury. Even though you don’t touch it, you know it’s there.”11

Griffey suffered the injury when he made a leaping catch in center field to rob Kevin Bass of an extra-base hit into the gap in an early-season game against the Baltimore Orioles. When Griffey slammed into the wall, his exposed left hand slipped between sections of the wall padding at the Kingdome, and he suffered a fracture in his left wrist. The break required surgery to insert a metal plate and screws and put a damper on the best start in Mariners history.

“My team needed to win,” Griffey said of the play, which helped preserve Seattle’s one-run lead in the seventh inning of an eventual 8-3 victory. “I had to go get that ball.”12

Seattle was 15-12 after that game and 2½ games out of first place. Throughout Griffey’s 73-game absence, the Mariners went 36-37 and fell 11½ games behind the first-place California Angels.

Griffey made his return to Seattle on August 15, going 1-for-4 in a loss to the Minnesota Twins, but his presence still boosted the team. As the Mariners went 20-9 from September 1 onward, Griffey hit .277 with seven home runs (five of which came in the final 12 games of the season) to help Seattle erase a 6½-game deficit and win the American League West Division. The Mariners and Angels tied for the division lead after the 144-game, strike-shortened regular season, but Seattle won a one-game playoff, 9-1, to make the first postseason appearance in franchise history.13

In addition to the sources cited in the Notes, I used the Baseball-Reference.com, Stathead.com, and Retrosheet.org websites for statistics and team information. I also viewed video of the catch on which Griffey was injured:

4 Paulson and Johnston. Rashad was a guest first-base coach for the Rainiers. He attended Mount Tahoma High School in Tacoma before playing 10 seasons in the NFL between 1972 and ’82. Karl was the head coach of the Seattle SuperSonics and threw out the first pitch. He coached the SuperSonics to six straight winning seasons from 1992 to ’98.

6 Hollins pitched in the minors for seven seasons, but never appeared in the major leagues. In seven starts with Edmonton in 1995, he went 0-7 with a 10.31 ERA.

7 Milacki finished at 6-4 for the Rainiers, then went 13-3 with Tacoma in 1996 around two promotions to the Mariners. In Seattle, he finished 1-4 with a 6.86 ERA in seven games (four starts). His final major-league appearance came in the ninth inning of a 9-2 victory over the Athletics on September 21.

9 Pozo was one of three Rainiers to hit at least 10 home runs in 1995 (also Alex Rodriguez and Greg Pirkl). He had a single plate appearance for the Mariners in 1995, then added 25 games for the Boston Red Sox over the next two seasons.

13 The Mariners defeated the Yankees in five games in the AL Division Series before falling to the Cleveland Indians in six games in the Championship Series. Griffey hit .364 while playing every game of both series. He had seven multihit games and blasted six home runs.