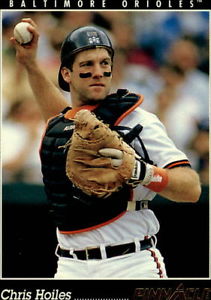 On Friday, August 14, 1998, before a nighttime crowd of 43,169 fans at Cleveland’s Jacob Field, the Baltimore Orioles squared off against the Cleveland Indians. Mike Mussina and Charles Nagy took the mound for their respective clubs, each seeking his eleventh victory of the season. Though both American League teams had similar won-loss records, Baltimore, at 63-57, was 26.5 games behind the East Division-leading Yankees, while Cleveland, at 66-53, was in first place in the Central Division. The fans would long remember this game, as Chris Hoiles hit two grand slam home runs to lead the Orioles to a 15-3 victory.

The Orioles jumped to an early lead off of Indians starter Nagy in the top of the first inning. Roberto Alomar singled and went to third on a Brady Anderson double. Rafael Palmeiro lofted a deep fly ball to right center for an out, and Alomar trotted home on the sacrifice fly. Anderson went to third base on the play but was left stranded as Nagy worked out of the jam. In the second, Mike Bordick singled with two outs and sped to third on Alomar’s second single of the game. With Anderson batting, the Orioles attempted a double steal. Cleveland catcher Pat Borders threw the ball into centerfield attempting to get Alomar at second, and Bordick scored with Alomar going to third. Anderson singled past the second baseman David Bell, bringing Alomar in for Baltimore’s third run of the game.

Cleveland notched a run in the bottom of the second when Travis Fryman mashed a solo shot to deep right field off of Mussina, trimming the Baltimore lead to 3-1. But the Orioles stormed back in the top of the third. Eric Davis led off with a single to right and was quickly forced at second on a ground ball by designated hitter Harold Baines. Cal Ripken, Jr., doubled into left field, putting runners at second and third. Nagy intentionally walked B.J. Surhoff, in order to bring up Hoiles, who was batting eighth in the order. The Baltimore catcher parked a Nagy offering deep down the left field line for a grand slam. Bordick followed with a walk, and then Alomar doubled into the left-center gap, plating Bordick. At the end of two-and-a-half innings, the Orioles led 8-1.

Cleveland put together two hits in the bottom of the fourth and Fryman scored his second run of the game. Mussina would then settle down and retire the last fourteen batters he faced. In the top of the sixth, Nagy was still in the game, but obviously struggling. He hit Anderson with a pitch to start the inning. Brady stole second and then moved to third on a Nagy wild pitch. Palmeiro walked, and Willie Greene (he replaced Davis in the fourth) singled, driving in a run. Mike Hargrove, the Indians skipper, finally walked to the mound, taking the ball from Nagy and calling in Ron Villone in relief. Baines moved both runners up a base with a ground out to second, and Ripken launched his second double of the game, driving in Palmiero and Greene. Both runs were charged to Nagy, who had allowed 11 Baltimore tallies.

Villone would pitch three innings, and in the eighth, Baltimore roughed him up, too. His control would be an issue. Palmiero singled to lead off. Greene followed with a walk and Baines grounded into a 6-4-3 double play, with Palmiero moving to third. Jeff Reboulet had entered the game in the bottom of the sixth to play third base for Ripken, and he walked with two down. Rich Becker came on to pinch hit for Surhoff, and he drew the third Villone walk of the inning, loading the bases again for Hoiles. On a 3-2 pitch, Hoiles hammered a second home run, which was just inside the left foul pole and landed 406 feet from home plate. Chris Hoiles became just the ninth batter and the very first catcher to hit two bases loaded home runs in the same game.

Bobby Munoz came on to pitch the ninth from Baltimore and allowed back-to-back doubles to Jeff Manto and David Justice for a meaningless run. The Orioles clobbered the Indians, 15-3. Baltimore combined 16 hits with 7 Cleveland walks in beating the Indians. The Birds won for the ninth time in eleven games, bringing their record since the All Star Game break to 26-7, which was best in the major leagues.1 However, they would finish the season in fourth place, as the Yankees would win 114 games.

Lead-off batter Alomar paced the Orioles attack with a 4-for-6 evening, scoring twice. With his single in the third inning, Baltimore’s Eric Davis extended his league-leading hitting streak to 29 games. Teammates Anderson and Ripken each added two hits, but it was Hoiles’ 3-for-5 heroics with 2 runs scored and 8 runs batted in that was cause for celebration. Mike Mussina earned his eleventh victory of the season, in scattering seven hits without a walk in 8 innings. He struck out five in allowing only two runs; and 72 of his 104 pitches were rung up as strikes.

Hoiles had his own fan club in attendance: his mother, wife, and about 20 family and friends had traveled from Bowling Green, Ohio, to witness his historic performance. According to the Baltimore Sun, “the same crew had traveled to Detroit last month to witness his two-home run game against the Tigers.”2 This pair of grand slams gave the Baltimore backstop eight for his career. Baltimore manager Ray Miller had been using Hoiles in a platoon system with fellow catcher Lenny Webster. The two had combined for 21 home runs and 63 runs batted in through the middle of August.3 This night, however, Miller would be glad he inserted Hoiles into the lineup. Chris told reporters after the game, “My biggest asset is when I have a stick in my hands.”4

Interestingly enough, Hoiles would only play 25 more games in the 1998 season, the last of his professional career. He played mainly as a catcher, but also as designated hitter and first baseman. The 33-year old retired with 151 home runs in a ten-year career, all with the Baltimore Orioles. Hoiles had been plagued by injuries caused from a degenerative hip and a bad back.5 On May 1, 1999, the Orioles placed him on waivers, offering him another job within their organization.

The author thanks Bill Stetka, director of Orioles Alumni, for his assistance with obtaining sources.