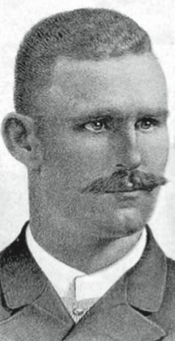 At a game on a pleasant afternoon at Eclipse Park in Louisville, the home fans saw five batting records set or tied. Remarkably, they were all set or tied by the same player. Even more remarkably, the record-setting player was a pitcher, Louisville’s Guy Hecker.

The trail of statistics was not as well marked in 1886 as it is today, so some of the details of Hecker’s record run have been lost. But we do know he set single-game records for runs scored (7), total bases (15), and home runs by a pitcher (3). Those three homers also tied the single-game record by a player at any position, and Hecker’s six hits equaled the existing single-game record in that category as well.

The game was the second that Sunday between the hometown Louisville Colonels and Baltimore of the American Association. The Colonels had easily won the morning game (played to make up an earlier tie), 13–6, behind the pitching of Tom Ramsey.

In his fifth American Association season, Hecker had always been known as a competent hitter, usually batting in the .270s. To that point in 1886, it was his pitching that had been subpar. A sore arm early in the year had prevented him from taking his turn in the box for several weeks, during which time Ramsey had become one of the Association’s top pitchers. In 1886 he sported a 38–27 record with 66 complete games. Hecker was on his way to a 26–23 record, down somewhat from his record of 110–66 over the previous three seasons. Ramsey felt unappreciated and made several less-than-kind public statements about Hecker’s poor performance. But Ramsey’s remarks did not appreciably cut into Hecker’s popularity; he was a fan favorite on a level with Louisville native Pete Browning.

The afternoon game began at 3:30, Louisville batting first and quickly putting a run across. The reporting in the local papers and the sporting weeklies of the time do not provide a full play-by-play, but we do know that Hecker singled and scored that first Louisville run. He reached on an error in the second on another drive to left field that Joe Sommer could not hold. In the fourth inning Hecker sent a drive to the wall in deep left field and slid safely into home ahead of Sommer’s peg.

Louisville led 7–5 after scoring four times in the sixth off Baltimore right-hander Dick Conway. Although the papers do not tell us what Hecker did in that inning, we surmise he contributed his second single of the day. In the seventh Hecker sent another drive to the left-field wall and easily completed his second inside-the-park home run, this time with a man on base.

Louisville scored four more times in the eighth as Hecker probably garnered his third single of the afternoon, coming around to score his sixth run. The pitcher closed out his day at bat with a threerun homer in the ninth on another long drive to left. The final score was 22–5. Hecker also collected a win on his complete-game, four-hit performance.

Hecker’s showing notwithstanding, the game was not an artistic success. Baltimore committed eight errors, which led to eight unearned runs. Louisville’s defense was only a little better, making five errors good for a single unearned run. Conway probably did not blame his catcher for his poor performance. That could have caused some familial strife as the receiver was his brother, Bill.

One Louisville paper noted that Hecker had set a record for runs scored in a game and for single-game total bases, and also tied the record for home runs in a game. But most game stories focused on the total-base count. Hecker’s 15 topped the American Association record of 13, held by Dave Orr of the Metropolitans.

Two days after Hecker’s showing, Bob Caruthers of St. Louis hit two home runs, a triple, and a double against Brooklyn. His 13 total bases would have tied the record but for Hecker’s performance. Caruthers also missed out on a three-home run game when he was out at the plate trying to stretch a triple.

The three-homer game was the fourth time the feat had been accomplished and the only time an American Association player did it. In 1884 Chicago’s Ed Williamson and Cap Anson collected three home runs in a game, as did Jack Manning of Philadelphia. The record stood until 1894, when Bobby Lowe of the Boston Beaneaters hit four. Lowe’s performance also wiped out Hecker’s record of 15 total bases. Hecker still holds the record for home runs by a pitcher in a game, although he shares it with Jim Tobin of the Boston Braves, who matched the feat in 1942.

The most enduring record of the August 15, 1886, game turned out to be Hecker’s seven runs scored, which broke a record set by Jim Whitney for the National League’s Boston club against Detroit on June 9, 1883. It has not been matched in the century and a quarter since.

Hecker’s best game as a hitter occurred in his best season at the bat. Throughout the year, even when his arm did not allow him to pitch, he was in the thick of the race for the batting title of the American Association. When the Association released final statistics, Hecker was listed with a .342 average, second to Dave Orr’s .346. When efforts were made in the 1960s and 1970s to verify all baseball records for inclusion in various encyclopedias, one of the discoveries dropped Hecker’s final average by a point, to .341. Oddly, while Hecker lost a point, Orr lost more in that recheck process, his average dropping to .338.

That left Hecker three points ahead of Orr and one point ahead of his teammate Browning. It also gave him one more enduring claim; he remains the only pitcher ever to win a big-league batting title. 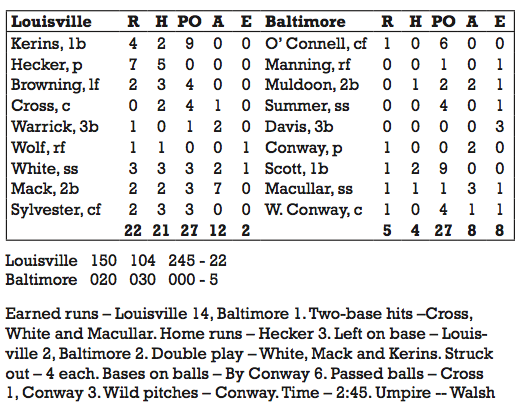