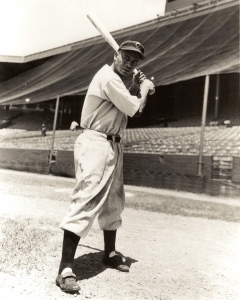 The first Negro Leagues East-West All-Star Game of 1946 took place before 16,268 fans at Griffith Stadium in Washington, D.C. This was the first time the East game would be played in the nation’s capital, inspiring sportswriter Sam Lacy to hope it also would be “the first time to put on an Eastern version of the East-West extravaganza, held annually in Chicago.”1

The low turnout for the game was disappointing, however, as the Pittsburgh Courier had enthused on August 3 that the sluggers of the East team were likely “to scalp the West and lure a record crowd of sports history, probably 30,000 fans to the stadium.”2 The low attendance was attributable in part to the absence of Satchel Paige, who initially had been expected to start for the West team but who did not participate in the game. Without Paige, the Courier’s anticipated matchup of “the exceptional pitching of the NAL [West] against the power hitters of the NNL [East]” did not materialize.3

The Courier’s prediction of an East-team victory proved to be correct as a quartet of high-flying Newark Eagles — Leon Day, Larry Doby, Monte Irvin, and Lennie Pearson — sparked the East to a 6-3 win over the West. Batting second and playing second base, Doby had two hits, two runs scored, and a stolen base, Irvin scored one run and knocked in another, while Pearson added an RBI of his own. On the mound, Day, described by Irvin as “cat-quick and a great pitcher,”4 picked up the save with one inning of one-hit ball. Newark catcher Leon Ruffin also played but went hitless in his lone plate appearance.

Before the Eagles’ stars could soar, they first had to wait out a delay of the game as “Players of the West squad … held up the all-star game for 15 minutes … in a baseball version of the sitdown strike. The group left the field en masse at the conclusion of the pregame practice and refused to go through with the contest until an understanding was reached under which they would get more money.”5 Dr. J.B. Martin, president of the Negro American League, which composed the West team, later explained that the West players had been guaranteed $50 each for their participation in the game, but they had demanded $100. The Baltimore Afro-American pointed out that a similar strike had been staged by the East team’s players before the 1944 all-star game in Chicago. New York Cubans owner Alex Pompez pointed to this strike while castigating the West players, telling them, “This sort of thing every time we have an all-star game has got to stop. You’re doing nothing but sending your own baseball to ruin.”6 The matter was settled in a locker-room negotiation session, but neither side would reveal the outcome of the deal.

Once the action finally got under way,  the East grabbed a quick lead by scoring a pair of runs in the bottom of the first inning off the “fireball pitching”7 of “Dan Bankhead, ace of the Memphis Red Sox … [who in regular-season play had] four wins and no losses, with 50 strikeouts in 36 innings, and 11 walks.”8 On this day, however, Bankhead walked the leadoff batter, Baltimore’s Henry Kimbro, and surrendered back-to-back singles to Doby and Howard Easterling (of the Homestead Grays) that resulted in a 1-0 deficit. Easterling tried to stretch his hit into a double and was retired in a rundown, but Doby advanced to third on the play and scored the second run of the inning on a groundout by Homestead’s Buck Leonard.

Philadelphia Stars lefty Barney Brown was the East team’s starter and, according to reporter Sam Lacy, “the American League [West] bats were woefully impotent before the offerings of Brown.”9 After pitching three scoreless innings, Brown gave way to Pat Scantlebury of the New York Cubans.10 Scantlebury faced just five batters, retiring only one and giving up three hits and an error by shortstop Sam Bankhead of the Homestead Grays.

In the top of the fourth, Birmingham’s Artie Wilson led off with a single. Scantlebury then retired the Cleveland Buckeyes’ Archie Ware before inducing what should have been a double-play grounder by Cleveland’s Sammy Jethroe to Bankhead, “who came up with one of his rare bobbles,” leaving both runners safe.11 Now in a bind, Scantlebury faced Birmingham’s Piper Davis, who “shot a sizzler down the left-field foul line that Monte Irvin of Newark held to a single by some fast fielding.”12 Wilson scored and Jethroe went to second. Yet another Buckeye, Willie Grace, lashed a single that scored his teammate Jethroe to tie the game. Baltimore’s Bill Byrd relieved Scantlebury, but the East fell behind when Byrd “watched Davis cross the plate as he was vainly trying to throw out Cowan [Bubba] Hyde, Memphis, at first.”13

The West’s lead was short-lived. The East scored two runs in the bottom of the fourth off Cleveland’s Vibert Clarke to retake the lead, 4-3. Easterling led off the inning with a bunt single and moved to second on a sacrifice by Leonard. Irvin smacked a single that plated Easterling and tied the game once more. After a basehit by Josh Gibson (Homestead), Pearson batted for Philadelphia’s Gene Benson and drove in Irvin, his Newark teammate, with the go-ahead run.

Another Newark player, Doby, was at the forefront of the East’s next rally, in the bottom of the fifth inning, when the East scored the final two tallies of the game. Kimbro led off with a bunt and reached safely after he “dived on his stomach and eluded [West first baseman] Ware’s outstretched hand. At the finish of his slide, Kimbro was resting on first base while Ware was looking around with unbelieving eyes.”14 Kimbro’s derring-do went for naught when he was erased from the basepaths on Doby’s fielder’s-choice grounder. Doby stole second base, advanced to third on an Easterling hit, and scored on a wild pitch by Gentry Jessup of the Chicago American Giants. Easterling scored on another Leonard RBI groundout. Leonard’s second RBI of the game produced the sixth and final run, and was the last of his record 14 RBIs in Negro League All-Star Games.15

Day pitched a scoreless ninth inning to pick up the save in support of Byrd, the winning pitcher. Clarke took the loss for the West. The majority of these players would meet again for the second East-West All-Star Game three days later at Chicago’s Comiskey Park, the traditional venue for the annual highlight of the Negro League season.

1 Sam Lacy, “16,000 See East Top West in All Star Diamond Tilt,” Baltimore Afro-American, August 17, 1946: 26. The 1946 season was not the first time two East-West Games were played, but the previous East games had not been nearly as successful as the annual showcase game at Chicago’s Comiskey Park. In 1939 an estimated crowd of 20,000 attended the game at Yankee Stadium in New York, which was only half of the estimated 40,000 that attended the Comiskey Park game. The disparity in attendance was even greater in 1942 when only 10,791 spectators showed up for the game at Cleveland’s Municipal Stadium, compared with the 45,179 who packed Comiskey Park that year.

10 “The last black player who stepped directly from a Negro team into a major-league uniform was veteran … Pat Scantlebury, who pitched in eight games for the Cincinnati Reds in 1956.” Robert Peterson, Only the Ball Was White (New York: McGraw-Hill Book Company, 1984), 203.