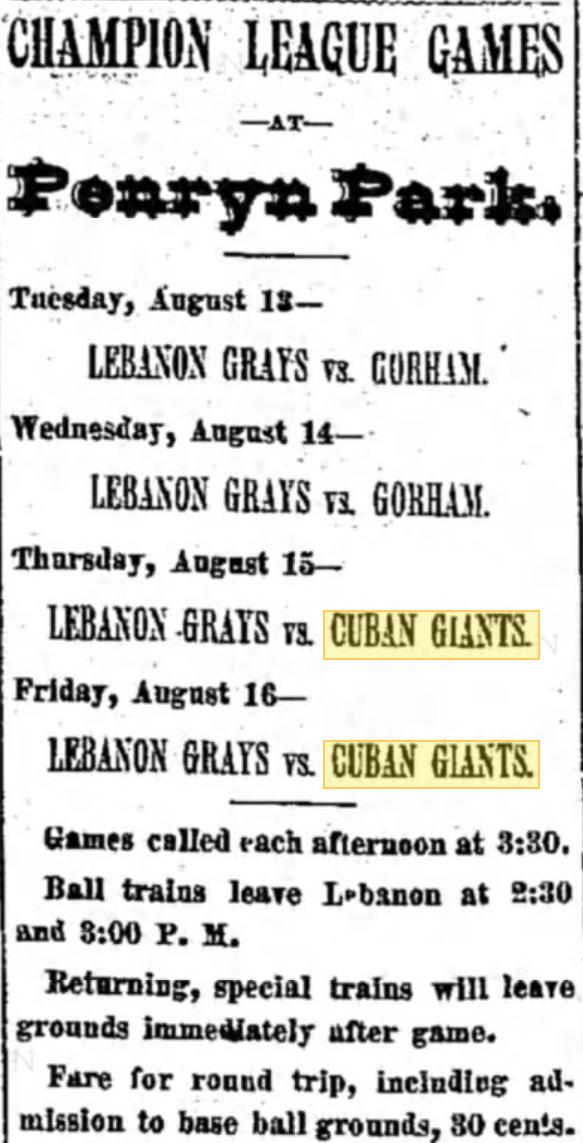 Thirteen teams played in the Middle States League, an integrated minor league, in 1889. The season opened with one Negro team, the Cuban Giants, representing Trenton, New Jersey, and five white teams in Pennsylvania.1 Six more white teams and a Negro team known as the New York Gorhams joined the league in midseason, but nine of the 13 dropped out before the season was over. The four remaining clubs were the Cuban Giants and teams representing Harrisburg, Hazleton, and Lebanon, Pennsylvania. The Cuban Giants and Harrisburg Ponies were the best teams in the league and the only teams to play the entire season; they finished the year with similar records,2 and both claimed to be the league champions.

The Cuban Giants, managed by S.K. Govern, were not Cuban. They were organized in 1885 and were “the first salaried professional black baseball team” and the top Negro team in 1887 and 1888, according to historian James A. Riley.3 Their second baseman, Frank Grant, was inducted into the National Baseball Hall of Fame in 2006. He was “a consistent .300 hitter with power, a fast base runner, [and] an outstanding fielder,” said Riley.4

At home and on the road, the Cuban Giants drew fans with impressive play and witty coaching. After a baserunner reached third base by a desperate slide, the third-base coach might say, “That’s right, don’t be afraid of your clothes — you got something better for Sunday.”5 To a runner on first base, the first-base coach might say, “There’s a hunk of molasses candy on that second bag waitin’ for you,” and the third-base coach would add, “Yeah, and your supper is over here on third!”6

The Lebanon Grays, a white semipro team, rose to the professional ranks by joining the Middle States League in August 1889. “Remember, the Grays are now professionals,” said the Lebanon Daily News proudly, “and all games they play are League championship games.”7 The team was managed by 24-year-old Joseph U. Buck, who sold sporting goods at his Lebanon store.8

The Grays played their first four League games at Penryn Park in Lebanon. They lost the first two to the Gorhams and the third to the Cuban Giants. They played the Cuban Giants again in the fourth contest, on Friday, August 16, 1889. The pitchers were 22-year-old William Selden of the Cuban Giants and 19-year-old Sam Heagy of the Grays. Selden was praised as “an excellent strategic pitcher” by none other than Henry Chadwick, the 64-year-old “Father of Baseball.”9 Heagy’s repertoire of pitches included “ins, outs, drops and snakes,” reported the Lebanon Daily News.10

The Grays batted first and took advantage of shaky defense. Grant Kirst drew a walk and stole second base as the throw from catcher Clarence Williams sailed into center field. The next batter, George Brown, singled, sending Kirst to third. Brown then stole second, and again the throw from Williams went into center field and Kirst scored. After Selden got two fly outs, Harry Hahn’s single was fumbled by left fielder Arthur Thomas, permitting Brown to tally.

With one out in the bottom of the second inning, Abe Harrison hit sharply through the legs of Brown, the Grays second baseman. Harrison then stole second base as catcher Hahn overthrew the bag. He continued toward third but was nabbed by a fine throw from Kirst, the center fielder. Now with two outs, Heagy walked John Frye, and Selden grounded the ball to the shortstop, Sparrow, whose low throw was dropped by the first baseman, George Goodhart. Johnston singled into short right field to load the bases, and Ben Boyd’s single drove in Frye and Selden.

Wilson Kline led off the top of the third inning with a single. Selden then threw a “fearfully wild pitch which nestled in the cinder near the back stop” until Kline “crossed the plate.”11 Goodhart drew a walk, and Hahn tapped back to Selden, whose poor throw to second base was muffed by Frank Grant. After Heagy popped out, Hull singled to load the bases. Selden made another wild pitch, and Goodhart scored. Grant prevented more damage by “capturing an apparent safe hit” by Sparrow, and after Selden walked Henry Lauser, Grant caught Kirst’s popup to end the threat. In the bottom of the inning, Grant doubled “dangerously near the foul line” and came home on Harrison’s single.12 After three innings, the Grays led 4-3.

Selden settled down and retired 18 of the next 19 batters; the lone exception was a two-out single by Hull in the eighth inning.

The Cuban Giants scored three runs in the fourth inning and three more in the sixth, on singles by Johnston and Clarence Williams, and two each by George Williams and Arthur Thomas. They tallied one more run in the seventh when “Selden sent the ball to the woods for a triple” and came home on Boyd’s sharp grounder to Goodhart at first base.13 The final score was Cuban Giants 10, Lebanon Grays 4.

It was the fourth consecutive loss for the Grays. “To make a respectable showing the Lebanon club needs at least one or two new infielders and an outfielder, and they must be good players and fine hitters,” said the Lebanon Daily News. “Now, [manager] Joseph [Buck], hustle for men like these and those four lickings will be forgotten.”14

At the end of the season, the Grays had a 6-16 record in League play. The record of the Cuban Giants was subject to debate, either 55-17 or 57-16, depending on which games were counted. A similar debate over the record of the Harrisburg Ponies made it unclear whether the Cuban Giants or the Ponies had the better season record and were the league champions.

10 “This Time ’Tis Victory,” Lebanon Daily News, August 27, 1889: 1; “Condensed Locals,” Lebanon (Pennsylvania) Courier, May 28, 1890: 3. Newspaper coverage of the game of August 16, 1889, in the Lebanon Daily News refers to the Grays pitcher as “Hagey.” Further research revealed that he was Samuel S. Heagy of Manheim, Pennsylvania, and not the “Ed Heagey” listed on the 1889 Lebanon roster at Baseball-reference.com in 2018.