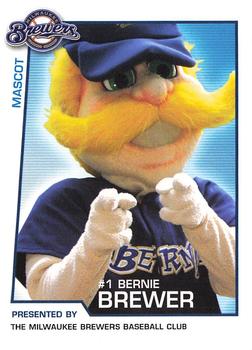 One of baseball’s most beloved and enduring mascots is Milwaukee’s Bernie Brewer. Fans at Miller Park thrill to the sight of Bernie celebrating a Brewer home run or victory by gliding down from his upper-level dugout on a giant yellow slide.

The origins of Bernie take us back to the Brewers’ inaugural year of 1970. The conclusion of a 42-day Milwaukee County Stadium live-in experience for Bernie Brewer occurred on Bat Day, August 16, in front of 44,387 fans elated by the Brewers’ come-from-behind 43 victory over the Cleveland Indians.

The earliest Bernie Brewer, 69-year-old Milt Mason, resided atop the County Stadium scoreboard in a camper for those six weeks in an effort to increase attendance for the second- division Brewers. The bankrupt Seattle Pilots arrived in Milwaukee, thanks to Bud Selig and his ownership group, only a week before the 1970 American League campaign began, giving the Brewers very little opportunity to sell season and single-game tickets.

The creator of Bernie Brewer, team general manager Marvin Milkes, was also an experienced promoter and knew Mason, a retired naval aviation engineer from San Diego, from his 1970 Pilots spring-training employment in Tempe, Arizona. Mason, already a baseball fan, came to Milwaukee with the newly transplanted team; Milkes hired him as an aide to both the Brewers trainer and equipment man. On Friday, July 3, the team announced that Bernie Brewer, a.k.a. Milt Mason, was being hoisted to a camper trailer on a platform atop the scoreboard in right-center field. Bernie would live on this perch until the Brewers drew 40,000 fans or more to a game or the season ended. Through their first 37 home dates, the Brewers were on pace to draw less than one million fans, an average of slightly more than 11,000 per game, but were ramping up time-tested promotions such as Helmet Night and Bat Day. Milkes added Bernie as another tactic to attract fans.1

Mason, who had ridden the wings of a stunt plane in the 1920s, was lifted 81 feet2 to his new 24-foot by 7-foot-8 home in a steel crane basket on Monday, July 6.3 In The Sporting News, he gushed, “I love this game so much I’d do just about anything to help our team, and if my being on top of the scoreboard will help, I’m all for it.” The Sporting News also stated that Bernie was staying up until the Brewers drew a capacity crowd of 43,109. The largest gathering to that point had been Opening Day, with 37,737 fans.4

Bernie increased excitement at Brewer games. Milwaukeeans, many of German descent, loved his attire, including lederhosen, alpine hat, suspenders, and long socks. On Cap Day, Sunday, July 26, Mason climbed to the top of the scoreboard clock to get the throng of 29,117 fired up. This third-largest 1970 Milwaukee crowd included 10,000 youngsters who received blue Brewers hats with the yellow “M.” Another 3,385 got cap coupons for later redemption.5 Gimbels department stores promoted the Brewers with newspaper ads asking fans to buy their tickets at Gimbels to help get Bernie down. Their July 17 ad even promoted Bernie’s use of a Gimbels hot plate.6 His camper was also connected to the County Stadium public address system so that Mason could speak to the fans. He used it on July 30, telling the crowd, “Goodnight everybody. And hurry back. I want to get down from here.”7

Even though his goal was to come down, Bernie, with his magnificent view, had a pretty lush perch in his specially outfitted trailer with air-conditioning, indoor plumbing, color television, an exercise machine, a direct phone line to the Brewers office, a tape recorder, and a refrigerator. His meals were delivered by Milwaukee restaurants after they called with a suggested menu item. If he did not like that option, he would order something else. Mason claimed he did not watch much TV, other than baseball games, but did a great deal of reading, making phone calls, answering 150 letters, and sleeping.8

The Brewers were now into August of their first year in Milwaukee with Bat Day scheduled for Sunday the 16th, and were cautiously optimistic of drawing that crowd of 40,000 to get Bernie back to the ground. Advance sales were 17,000; 19,000 general admission and bleacher seats went on sale the morning of the game.9

The 16th dawned a beautiful clear day as the County Stadium crew hurriedly cleaned up the stands and converted the field after a sold-out Green Bay Packers-Chicago Bears exhibition football game the night before. The Brewers staff was busy selling tickets, including 20,000 during the two hours before the 1:30 P.M. first pitch. Team President Bud Selig said afterward, “I didn’t know if we had the staff to handle such a sale in our first year,” but the club appropriately opened 21 ticket windows. All 15,000 bats were claimed an hour before game time, with 10,054 youngsters receiving redemption certificates for the next batch of Louisville Sluggers.10

It all finally clicked for the Brewers and Bernie. The official attendance was 44,387.

The Brewers went down early, 30, to the Indians11 and Bernie again climbed to the top of the clock to inspire the youngsters to get loud and wave their new bats to rally the team. The ballplayers considered Mason a good-luck charm when atop that peak and they indeed tied the game in the bottom of the eighth inning and won it in the ninth.12 Indians starting pitcher Steve Hargan was throwing a four-hit shutout going into the eighth. But Ted Kubiak led off the eighth with a single, Tommy Harper moved him to second with a one-out single, and Mike Hegan walked to load the bases. Dave May grounded back to Hargan; Kubiak was forced at the plate for the second out. The bases were again loaded and Danny Walton was up. The left fielder, who had committed an error in the second inning that allowed the second Cleveland run to score, atoned and fired up the crowd with a bases-clearing double off the left-center-field wall to tie the game.

After Ken Sanders retired the Indians in order in the ninth, the Brewers’ first two batters, Roberto Peña and Jerry McNertney, walked. Kubiak’s sacrifice advanced both runners. Brewers manager Dave Bristol sent Gus Gil up to pinch-hit in the ninth spot of the order against Vince Colbert, the Indians’ third reliever of the inning.13 After two pitchouts called by Indians manager Alvin Dark in anticipation of a suicide squeeze, Gil hit a 2-and-1 slider cleanly to left, his second walk-off pinch-hit of the season, bringing Peña home to the delight of the ecstatic Bat Day crowd.14

After 42 days and 41 nights, Mason could finally descend from his elevated home. Always the entertainer, he chose to slide down all 81 feet, fireman-style, on a rope. It cost him burns on both arms and one leg. He then rode a new Dodge Super Bee (awarded to a fan who correctly guessed the attendance) to home plate for postgame ceremonies. After some delicate handshakes, Mason received medical treatment for his rope burns and proceeded to the team clubhouse, where he was given a “hero’s welcome” by the ballplayers and got an invitation from Bristol to take some batting practice before the next day’s game. Later, he returned for one more night in his lofty residence: Mason, his belongings, and the camper were brought down on Monday.15

Thanks to Milt Mason and Marvin Milkes, Bernie Brewer enjoyed a storied beginning in 1970 that has led to five decades of mascot fun at County Stadium and Miller Park. The current Bernie, with his bushy mustache, a 2020 finalist for the Mascot Hall of Fame, has the largest following of any major-league mascot on Twitter, and the story of his origins and 1970 Bat Day was ranked the 98th greatest moment in Wisconsin sports history over the last 50 years by the Milwaukee Journal Sentinel in 2020.16

This was the second major-league game I attended. For an 8-year-old growing up on the northwest side of Milwaukee, what an exciting week as my first game was only three days earlier, with my grandparents and brothers, and this Bat Day was with my parents and brothers. I still have the Tommy Harper bat (all of 28 inches and 21 ounces!) picked up when we went back to County Stadium several weeks later with one of those 10,054 redemption certificates. I felt so fortunate to receive a Harper bat as he was the Brewers’ first All-Star on his way to becoming only the fifth “3030 club” member with 31 home runs and 38 stolen bases in 1970. I wish I still had the ticket stub and scorecard!

Hoffmann, Gregg. Down in the Valley: The History of Milwaukee County Stadium: The People, the Promise, the Passion (Milwaukee: Milwaukee Brewers Baseball Club, 2000).

The author also accessed the Baseball-Reference.com and Retrosheet.org websites for additional information and the game box scores and play-by-play:

11 Neither team was in the pennant race. Cleveland stood fifth in the AL East, 17 games behind Baltimore. The Brewers were fourth in the AL West, 25½ games back of Minnesota and only a half-game ahead of Kansas City for fifth place.